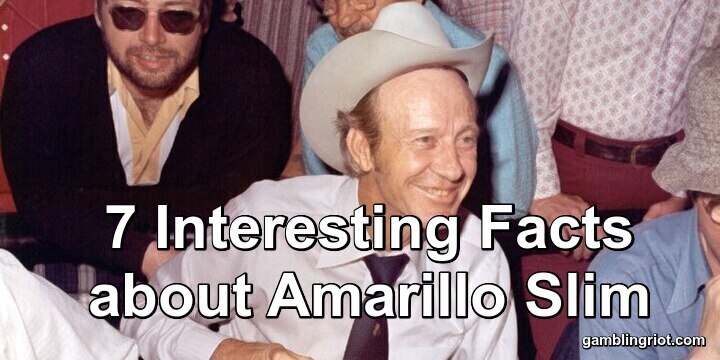 Slim was legendary.  He popularized Texas Hold’em in Las Vegas during the late 1960s.

Tall and lanky, Amarillo Slim wore custom-made cowboy boots and a 10-gallon hat. He looked like he just walked off the set of a Hollywood Western.

His gift for gab made him a welcome figure around poker tables. Amarillo Slim projected a friendly, sociable persona.

His biggest talent was when other players realized only after leaving the room that he’d played them for suckers.

Let’s dive into this famously sneaky Texas icon of the Vegas gambling scene.

Many people found Amarillo Slim’s name romantic. It conjures up the mystique and lore of the Old West.

He entered the world as “Thomas Austin Preston, Jr.” in 1928. Amarillo Slim is from Arkansas, not Texas.

Slim’s parents eventually divorced. His father moved to Amarillo. Amarillo is where he got part of his “stage” name.

Tom Austin Preston, Jr. spent much of his childhood living on a ranch. He learned basic cowboy skills, including horseback riding and roping.

How did he choose his poker name? During his youth, he maintained a skinny frame. It became popular to associate nicknames with physical traits.  His friends referred to him as “Slim,” so he added “Amarillo.”

At the time, it seemed likely the U.S. would soon launch an invasion of Japan. Most Americans had never heard of an atomic bomb then.

Slim decided to enlist in the military about 3 months before his high school graduation.

Unlike many service members of that era, he prospered financially during his enlistment. His skill as a gambler and a card player allowed him to earn tons of cash.

He was also known for frequently accepting dares too.

Slim developed a lucrative side hustle. He purchased goods from soldiers below-market prices and resold them for big profits on the Black Market.

Slim eventually returned to Texas after making a small fortune overseas. It’s unlikely military lawyers would’ve approved of how he acquired his wealth in the service.

During the 1950s, gambling outside of casinos remained illegal in most places in the USA. However, Slim discovered he possessed a talent for high stakes poker.

He spent his time visiting pool halls and bars, participating in backroom gambling games. This allowed Slim to hone his talents.

They made the rounds of poker tables across the nation. The 3 friends sometimes faced life-threatening situations.

From time to time, the police arrested them. Sometimes crime figures threatened their lives.

Disgruntled players who lost money at the table also threatened the 3 men. The 3 gamblers spent long hours on the road. They lived in a series of living in motels and hotels much of the time.

Slim used personal charm and charisma to minimize conflicts. He excelled at telling elaborate tales at the card table.

Other players found his stories so captivating that many didn’t even begrudge losing money to Amarillo Slim. Most card players considered him likable.

Slim perfected his poker playing skills during the years he spent as a self-described “rounder.” He made keen observations about human nature and wagering.

For example, Slim famously compared the people who played cards with him to sheep. He noted he could shear a sheep multiple times. Yet, he could only skin it once.

During his lifetime, Slim probably became most famous for helping to introduce Texas Hold’em to Las Vegas casinos. By the late 1960s, he frequently gambled in legal venues in Nevada.

Slim possessed amazing endurance during the long games of Texas Hold’em. He sometimes played for 24 hours or more at a time.

Slim won the 1972 World Series of Poker. The publicity resulting from this victory made him a popular talk show guest for several years.

Amarillo Slim continued to play poker full time as a professional gambler. His skill at the game allowed him to travel widely.

5- Amarillo Slim Perfected the Art of the Proposition Bet

Slim also gained notoriety for mastering the proposition (or “prop”) bet. This type of gambling resembles a game of dare.

Prop bets are bets made on the possibility of something happening during an event and not on the conclusion of the said event.

Yet Slim carried this technique to new heights. He attracted attention by using cunning to prevail in prop bets.

Amarillo Slim believed in either setting conditions allowing him to win this type of wager, or he would not gamble using a prop bet at all.

For example, Slim famously claimed he once trounced the famous card player Rudolf Wanderone (aka “New York Fats”) in a pool game played with broom handles instead of pool cues.

Of course, Slim had practiced playing that way extensively beforehand. He felt confident in his skills before making the wager.

Slim often used prop bets to enhance his image and generate publicity. This type of match helped promote charitable events during the 1970s and 1980s in Las Vegas.

After garnering celebrity as a result of his 1972 World Series of Poker victory, Amarillo Slim received an offer to join the motion picture cast.

He appears on-screen briefly as a poker player in California Split(1974). Robert Altman directed and co-produced the film.

Despite winning at the tables, they lose much in the end.

Slim’s fame as a poker player helped launch his fame. Filmmakers would later produce documentaries about his career as a professional gambler.

Despite all the hype surrounding Slim, plans to develop a fictionalized account of his life as a Hollywood picture ultimately failed.

One of the most interesting facts about Thomas Austin Preston, Jr. relates to his overall impact. His fame possibly eventually helped contribute to the wider legalization of gambling in the USA.

Slim’s history as a poker player spanned both illicit and legal gaming venues. In 1992, he received the honor of induction into the Poker Hall of Fame.

During the 1980s, Slim published several books about his life and times. He also spent time promoting his own competition: the Super Bowl of Poker.

The event vied for attention with the World Series of Poker for some 13 years. It generated a lot of public interest in the game of poker.

Slim encountered challenges because he did not own a casino. Unlike Benny Binion, who promoted the World Series of Poker at the Horseshoe, Slim’s annual event relocated from one casino to another.

It took place variously at the Sahara Tahoe, Caesar’s in Tahoe, and Caesar’s Palace in Las Vegas. Eventually, the tournament moved to the Flamingo Hilton in Laughlin, Nevada. Frequent relocations limited the expansion of the tournament.

The activities of tournament promoters, like Slim, undoubtedly increased public awareness about poker. Fans of the game began taking trips to casinos to compete in legal tournaments.

This change impacted high-stakes poker status from a large backroom activity to a more public form of gambling.

During this time, interest in legalized gambling grew in several states outside Nevada. New Jersey had passed a referendum that allowed casinos in 1976.

Gaming establishments opened in Atlantic City during the late 1970s and the 1980s. Deadwood, South Dakota, welcomed casinos in 1989. Riverboat gambling became legal in Iowa in 1991.

Amarillo Slim is a Legend

Ultimately, the celebrity Slim acquired as a poker player and his efforts to promote Texas Hold’em generated attention for the game. His enduring legacy today probably lies in helping to create a wider interest in this form of gaming.

Although the Super Bowl of Poker ended as a business venture, the World Series of Poker continues to this day. The event’s success can partly be attributed to Amarillo Slim’s contributions to the gambling world.

Yet his advice about detecting “tells” and playing suckers for fools safely at cards continues to inform full time poker players even today.

Perhaps nothing sums up Amarillo Slim’s contributions to society better than the title of his autobiography: Amarillo Slim in a World of Fat People (2003).

I would love to hear your feedback and any thoughts you might have about the man, the myth, the legend, Amarillo Slim. Happy Gambling