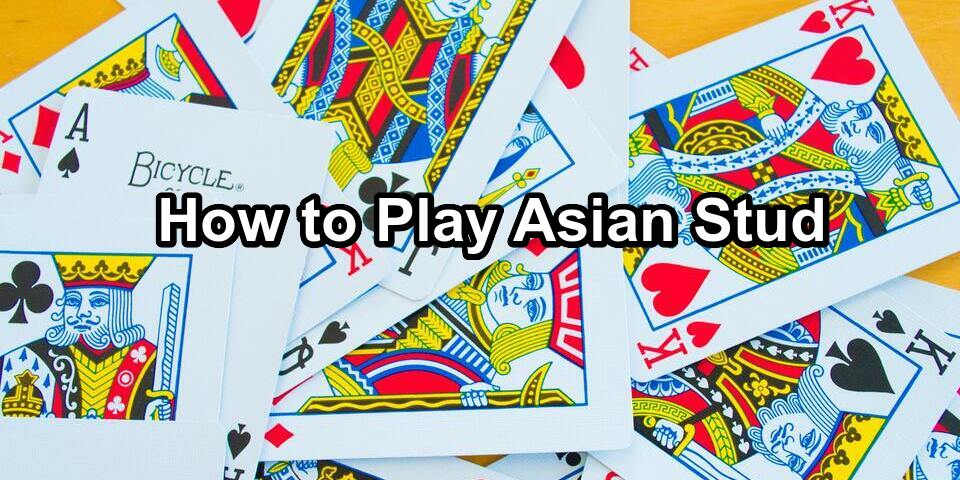 I’ve noticed a lot more questions and search queries about Asian Stud in 2022. “How do you play Asian Stud?” is become one of my more common poker questions, along with who goes first in poker and how does the casino make money from poker.

This post talks all about how to play Asian Stud. In 2022, you’re probably starting to see Asian Stud games popping up in your area casinos. The game is spreading from the Seattle-area casinos where it premiered.

Learn the rules of Asian Stud and how to play this new casino poker variant in this post.

What Is Asian Stud?

Asian Stud is a stud poker variant played in casinos. It’s not a head-to-head game. It’s designed to be played on a stylized table game surface on a casino floor. I don’t think Asian Stud is available at online casinos yet, but I’m sure it will be there soon.

Asian Stud is a single deck stud poker game played with the addition of a joker card.

I’d describe Asian Stud as a combination of Pai Gow and baccarat. That’s probably where the word “Asian” in the title comes from.

Below is a guide to Asian Stud rules and how to play.

Asian Stud: Rules for How to Play

This section gives you everything you need to know how to play Asian Stud.

The deck consists of a standard 52 cards plus a joker.

Cards have the same values they have in baccarat:

Card values are different for the game’s side bet. This is explained further down.

Each player makes an ante wager. Casinos will have table limits in place depending on their preferences. For the purpose of this description, assume a $10 table minimum.

Each player and the dealer get five cards face-down. Players are allowed to look at their own cards.

At this point in the game, each player can raise or fold.

Players who raise have to add a bet equal to their ante. There’s a spot on the table for this additional bet.

Players who fold give up their cards and their ante.

Every player who remains in the game breaks their hand up into two separate hands. That means each player makes a three-card hand and a two-card hand out of their five dealt cards.

The three-card hand must be worth 10, 20, or 30 points exactly in order to qualify. If a player doesn’t form a qualifying hand, they can only win if the dealer’s hand fails to qualify.

A player’s two-card hand is then judged based on a new card value hierarchy.

This sounds more confusing on paper than it is in the real world. If a player’s two-card hand is a 5 and a 9, the point total is 14, so the two-card hand value is 4.

Once all players have arranged their hands, the dealer attempts to qualify. If the dealer does form a qualifying hand, his two-card hand is judged like the players’.

A dealer hand that doesn’t qualify pays out even money to player ante bets, minus a 5% commission. All raise bets are push.

Note that some tables don’t charge a commission in this situation. Check the rules before you play to be sure.

6 – Determining a Winner in Asian Stud

When both the player and dealer’s three-card hands qualify, the game continues.

Now it’s time to compare the values of the two-card hands still in the game.

When the dealer hand outscores a player’s hand, the player loses their ante and raise.

When a player’s two-card hand beats the dealer’s hand, the player wins on both their ante and raise bets, according to the common pay table below:

You may pay a 5% commission at this point in the game, or you may not. House rules apply.

7 – The Asian Stud Side Bet

Most Asian Stud games allow players to place a small side bet ($1 or $5) to chase a bonus payout.

When you place this side bet, the poker value of your combined five-card hand is rewarded based on standard poker hand hierarchy.

For the purpose of Asian Stud, the deck’s lone joker card is only wild when used to complete a straight, flush, or straight flush. Otherwise, it counts as an ace.

The game’s house edge depends largely on the 5% commission rule.

All three have relatively low house edge figures, though one version of the game is clearly better for gamblers looking for an advantage.

The bet in Asian Stud that gives the house the biggest edge is the side bet. Different casinos have different pay tables for the side bet. The house edge on Asian Stud’s side bet averages around 14.5% no matter what table is in play.

You don’t pay a commission on side bet winnings. That’s good, because the casino’s advantage is something like five times higher than any other bet in the game.

Asian Stud: Strategy for How to Win

Asian Stud strategy is simple. It’s one of the easiest card games for gambling.

The first piece of advice I have for new Asian stud players is to ignore the side bet. The house edge might be as high as 20% depending on the pay table. Even on the best tables, you’re giving the casino something like 13-14% edge to chase payouts that are probably only going to be worth a few bucks. If you really like side bets and understand that it’s a sucker bet, go ahead and make it for the entertainment value.

The second piece of advice for newcomers to Asian Stud – play only on ante bet commission games. These give the house the smallest edge at just under 1%. If you can’t find that game, play a raise bet commission game. The worst option in terms of advantage is the game that charges commission for both.

My third and final tip for people trying Asian Stud for the first time – you should always raise. Smarter people than I (like the Wizard) have looked into the game and decided that raising every time you have the option is the best way to play the game. This is apparently even true when you don’t hold a qualifying hand. Find an ante bet commission game, sit there and make raise after raise after raise, and you’ll be facing the best-possible Asian Stud odds.

If you enjoy casino-style poker and you can find a game near you, you should try a few rounds of Asian Stud. In 2022, it’s one of the how new casino table games. It’s popping up in casinos across the country, moving in a generally easterly direction from its home in the Pacific Northwest.

The game’s simple strategy and unique play are helping to draw crowds to Asian Stud tables. Asian Stud combines a few different Asian-style poker games into one easy-to-play game with a relatively-low house edge and an available side bet.