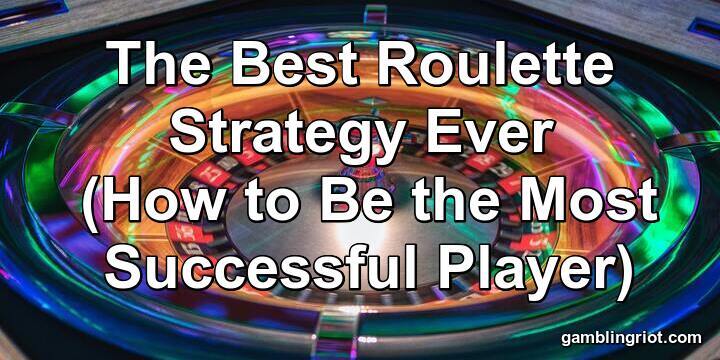 Test your roulette strategy here. Free games, Get a 350% bonus with your first deposit. WildVegasCasino.

The goal of this post is to offer you the best roulette strategy ever.

It’s true that this is a game of pure luck.

But you can be a successful roulette player.

All you need to do is find other roulette players who’ve succeed and implement the same strategy.

The Best Roulette Strategy Is a Biased Wheel System

Here’s the thing about this game:

There’s no such thing as a flawless roulette wheel. All mechanical devices are slightly imperfect. If you can find a wheel that’s imperfect enough, you can get an edge over the casino.

The best roulette strategy involves writing down numbers as they come up during play. Eventually, you’ll find a wheel where some numbers come up more often than they should statistically.

When that happens, you’ve got ’em!

Think about this, too:

Because of their physical imperfections.

Roulette wheels have physical imperfections, too, but they’re too expensive to replace that regularly.

And even a wheel that’s close to perfect when it’s first bought and installed develops a bias after the wear and tear of regular use.

My plan for the rest of this post is to look at a few examples of players who’ve used this “best roulette strategy” to see how they did it:

How Much Money Did Vladimir Granec Win Playing Roulette?

Vladimir Granec Won money playing roulette at international casinos during the 1970s. Many huge, almost un-explainable casino losses were reported to Interpol and European police departments in France in 1975. Those complaints also started coming in from other countries, too, like Africa and Yugoslavia.

And it took these police years to catch up with Granec and his confederates.

In France in 1978, The Municipal Caisno in Canne and La Siesta in Antibes lost $3.2 million on their roulette tables. When you added in the losses on roulette from other French casinos, the total came to $6 million.

Of course, it’s not illegal to exploit a bias in a roulette wheel. It’s the casino’s responsibility to ensure their equipment works properly, and if they don’t, it’s on them.

But it IS illegal to create a bias in a roulette wheel, and that was apparently Granec’s big game. He had several confederates, at least one of whom was an expert mechanic. This mechanic was able to not only fix the wheel, but he was also able to “unfix” it after they’d won their money–leaving the casinos confused about what had happened.

To this day, no one knows how this crew got access to the roulette wheels to fix them. We do know what they did to fix them–they loosened the slots on the wheel to either side of the 20. (The 7 neighboring numbers were 9, 31, 14, 20, 1, 33, and 16.) To the croupiers, the player just seemed really lucky.

To try to thwart his luck, the croupier spun the roulette wheel faster, which had the effect of causing it to land in the desired series of numbers even more often than it should have.

Finally, in 1981, the police caught up with the ringleader of this scheme–Vladimir Granec–the so-called “King of Roulette.” He was a Czechoslovakian living in Munich. Granec had a storied career prior to his life as a roulette cheat–he’d been 2nd in command of the Czechoslovak Department of Radio Free Europe, owned casinos in both England and in Yugoslavia, and he ran a real estate business.

They were finally able to arrest Granec in 1984. They took him to trial again in 1986 after failing to convict him in 1984. During his trial this time, he explained that he’d merely tracked where the ball landed. When he found a number that came up 10% more often than it was statistically supposed to, he started betting on it.

He was again acquitted.

The French courts were finally able to convict him when they found 3 of his confederates who were willing to testify against him. Each of them admitted that they’d worked for Granec in exchange for 2% to 20% of the winnings.

But since he’d won over$10 million or more at the roulette tables, he’d come out way ahead. In fact, Vladimir Granec is the largest roulette winner in the history of the game.

This does not mean that I think the best roulette strategy is to cheat. But it’s hard to talk about biased wheels without telling the story of Vladimir Granec.

Watching the Wheels Go Round and Round

Several winners demonstrated their best roulette strategies by just watching the wheel. One of them was William Nelson Darnborough. From 1904 to 1911 he beat roulette consistently. He won $415,000 from the Monte Carlo Casino alone. He was famous for how fast he placed his bets when the croupier started spinning the wheel.

Here’s how the wheel-watcher system works:

The bettor estimates the speed of the ball and the wheel relative to each other. Then he looks at the relative position of the ball compared to the numbers on the wheel. He then calculates the average point of fall for the ball. Once this is done, he immediately places his bet.

Users of the wheel watcher system lose more often than they win, but when they do hit a win, the amount compensates for the losses and then some.

They’re able to make these calculations within just 1 to 3 spins of the wheel.

Another player to beat roulette was Edward Thorp, who’s better known for inventing card counting in blackjack. Thorp was a professor of both physics and mathematics at MIT. He and Claude Shannon, both professors, bought a regulation wheel in Reno, Nevada and set it up in Shannon’s basement.

They wrote an academic paper where they’d determined that they could reach a +15% expectation by betting on the 5 numbers they predicted the ball would land on–again, just by eyeballing the speed of the ball compared to the speed of the wheel. They were able to increase this to +44% by using a computer. (I should note that using a computer for such a purpose would be considered cheating in a real casino and would be illegal.)

You can read about their experiments in a book called The Eudaemonic Pie by Thomas A. Bass.

It recounts how in 1962, Thorp had already been banned from some casinos because of his card counting. But he used sunglasses and a fake beard as part of a disguise to get past this. And there were still some casinos where he hadn’t been banned.

Thorp and his friends spent a week at the Riviera. They had repeated problems with the wires in the microcomputers they were using, which were the size and shape of a cigarette case. They didn’t win at roulette and eventually gave up.

A later team of roulette players used the same principles with a computer that worked, though. They won $55,000 at the Valkenburg Casino in Holland. At another casino in Germany, the casino took countermeasures and stopped allowing players to make bets after the wheel had been spun.

It’s probably hard to become a wheel-watcher, but it’s probably not impossible, either. Laurence Scott wrote a book called How to Beat Roulette which explains a one-person and 2-person wheel-watcher system.

How Can You Become the Most Successful Roulette Player of All Time?

On an American roulette wheel, the probability of the ball landing on any specific number is 1/38.

Here’s how the math works on that:

If the wheel is perfect, and the number comes up once every 38 spins, the house has an edge of 5.26%. You calculate that by taking a statistically perfect set of spins and averaging the amount lost per spin.

But let’s do the math behind a number that comes up 1/30 of the time.

But how do you find a number that’s actually biased?

Any given number then has a 50% chance of coming up more often than statistically likely during any given 8-hour shift.

This is just the probability that a number is coming up more often than it “should” just because of random chance.

Creating a Roulette Betting System Based on This

The casino provides cards for tracking which numbers come up as you’re playing. You’re going to keep track of how many times a specific number has come up.

After the first spin, the ball will have landed on a number once. That number is the number you bet on the next spin, because it’s the number that has come up most often. It’s unlikely that this number has a bias, because the wheel is still random.

When another number comes up, you switch to that number.

Once a number has come up 3 times, it becomes the theoretically most likely number, and you switch to that number.

You continue to switch to the number that has come up most often throughout your time on the wheel.

The more spins that are made, the likelier it is that you’re betting on a biased number, increasing your probability of winning.

It might take several days of play for this system to bear fruit, but when it does, you can make a lot of money. Winning 35 to 1 on a 29 to 1 event is an advantage that most gamblers dream of.

This betting system comes from the book Beating the Wheel: Winning Strategies at Roulette by Russell T. Barnhart.

Of course, to place this many roulette bets, you’d need a bankroll sufficient to cover the action. At a $5 table, if you lost every spin, you’re looking at $1500 to $1750 in losses per day. (This assumes you’re playing for 8 hours day.)

Your goal, too, is to stay in action until your long-term edge kicks in. This means you don’t want to go broke just because you were unlucky. Even if you’re betting on a number that’s statistically more likely to come up, you could go broke during a cold streak.

In blackjack, card counters use “risk of ruin” as their guideline for how big a bankroll they need. They set a goal of 80%, 90%, 95% or 99%, which is their probability of NOT going broke before they run out of money. The number of betting units needed for each level goes up as your probability of not going broke goes up.

To best avoid going broke before your edge kicks in, you should have at least 200 units to bet with, but 700 to 1000 units would be even better.

You should also avoid betting on a single number throughout your play, as it will become obvious to the casino what you’re doing.

This, of course, requires a larger bankroll than if you were just betting a single number every time, so if you’re a $5 bettor, try to have $3500 to $5000 in your total bankroll to play with.

I can’t guarantee that the best roulette strategy will result in you becoming the most successful roulette player of all time. Modern roulette wheels tend to be well-made, after all. If you’re searching for a biased wheel, you should go to a smaller casino that only has a single wheel. You should also keep in mind that a wheel might not be biased at all.

You can easily go broke playing roulette, and all the theory in the world isn’t enough to win if you’re consistently unlucky.

At any rate, I wish you luck on the Devil’s Wheel.