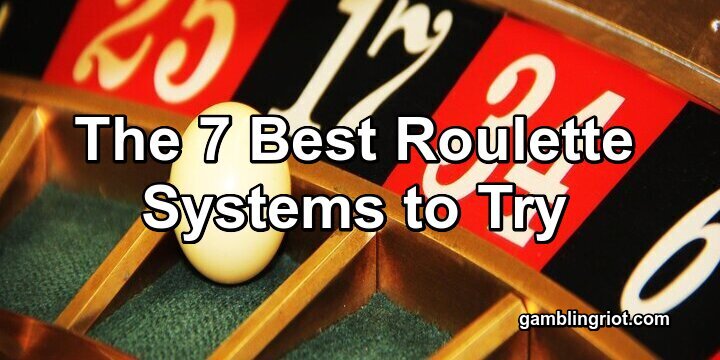 Before I list the 7 best roulette systems to try, I need to explain that roulette is  a game where the house as a mathematical edge that can’t be beat in the long run. I explain in a little bit of detail in my previous post, 7 Ways to Win at Roulette, how the math behind the game works.

For the purposes of this post, let me reiterate that the house edge for roulette, in most United States casinos, is 5.26%. This is a mathematical estimate of how much money you’ll lose on average per bet over time. None of the 7 best roulette systems described on this page will enable you to overcome that edge.

But you and I don’t gamble in the long run. Casino gamblers who play roulette care about short term results. And while betting systems don’t work in the long run, they often work surprisingly well in the short run.

Also, some roulette systems are just plain fun to try–even if they won’t help you win in the long run.

Below I list the best roulette systems to try along with the pros and cons for each of them.

The Martingale System is the most famous and popular roulette betting system. It’s used in some other casino games, too. But it’s most famous as a roulette system.

One of the biggest pros of the Martingale System is that it’s easy to implement. You start by placing a bet on one of the even-money bets on the roulette table. These include betting on red or black, or on odd or even, or on high or low.

If you win, great! The system worked. Now you can start over and bet on the next spin of the wheel.

If you lose, you move on to the next step of the system. You place another even money bet. This time, you bet twice as much as you did last time. For example, if you bet $5 on black on the first spin and lost, you now bet $10 on red or black. (It doesn’t really matter.)

You double the size of your bet again, this time to $20.

The Martingale System is what you call a “progressive betting system”. You bet progressively higher every time you lose. Eventually, when you win, you win back your previous losses and show a one-unit profit.

I’ve already mentioned that the biggest pro to this system is its simplicity. Anyone can figure out how to use the Martingale System. It also works pretty well a lot of the time.

The biggest con with the system is the same as with all these systems:

It doesn’t work in the long run.

Eventually you’ll have a losing streak that’s long enough that you’ll be unable to place the next bet in the sequence. You’ll either run out of money or you’ll bump into the casino’s betting limits.

It seems horribly unlikely that you’ll lose X number of times in a row, but it always happens eventually. When it does, you’ll lose enough money to make up for all the small wins you’ve had.

Here’s an example of the progression starting with a $10 bet:

That’s what happens when you have a losing streak that lasts for 7 or 8 spins in a row.

Most casinos have betting limits on their roulette games. If they accept low wagers, like $5 or $10 per spin, they usually cap the betting at $500. You might run into a maximum bet of $1000, too.

Think about this, too:

Sure, in the short run, you’ll often see some small profits using this system. I think it’s fun to do, too.

But the casinos aren’t worried that you’ll put them out of business using the Martingale System. They understand the math better than that.

Since the Martingale System was so simple, I thought it might be appropriate to follow that up with an explanation of a more complicated system–the Labouchere System.

Like the Martingale System, the premise behind the Labouchere System is that you’ll recoup your losses on previous bets with wins on subsequent bets.

The first step in the Labouchere System is to choose a series of numbers. It doesn’t matter what they are, but the potential profit for the betting sequence is the sum of the numbers in that sequence.

Here’s an example sequence to start with:

Your potential profit is $30.

If you win that bet, you cross the first and last number of the sequence off the list.

But if you lose, you add another number to the end of the sequence–the amount you just bet. (In this case, $20).

You continue this system until you only have a single number left in the sequence. When that happens, you bet that amount. Win or lose, the sequence is over, and you start a new sequence.

Let’s look at a longer example:

This continues until you’ve crossed off all the numbers on the list but one. That’s the amount of your final bet in the progression.

The Labouchere System runs into the same problem as the Martingale, eventually. You’ll sometimes hit a losing streak that’s long enough that you’re placing huge bets. You might not be able to afford those bets. Or you might run into the table limits.

In the short run, sure, the Labouchere System can win you some money. It’s a more fun system than the Martingale if you’re looking for a more robust system to keep track of.

But in the long run, it can’t beat the math behind the game.

Your goal is to win 3 bets in a row, doubling each of them. When you succeed, you start over with a single unit bet.

If you lose a bet, you continue to bet the flat amount.

Here’s another example where you don’t win on the first spin:

The ultimate goal is to book a 7 unit win.

The theory behind this system is that winning and losing comes in streaks. When you get hot, you want to take advantage of it.

I think this is a fun way to play roulette, too.

The D’Alambert System, like the Martingale System, requires you to raise the size of your bets after losing bets.

Unlike the Martingale System, you don’t have to double your bets, though. The progression is gentler. You might consider the D’Alambert System to be a “lite” version of the Martingale.

You start by placing a single-unit bet. For example, you might decide that a unit is $10.

If you win, great–the system worked.

If you lose, you increase the size of your next bet by a single unit. In this case, you’d bet $20 on the next spin.

Every time you lose, you increase the size of your next bet a single betting unit. In the example above, if you lost again, you’d bet $30 on the next bet (not $40, as in the Martingale).

Every time you win, you reduce the size of your next bet by a single betting unit. This is a major difference from the Martingale System.

Here’s how that works in the example above:

As long as the number of winning bets and losing bets are roughly the same, this is a winning system.

But as you already know, over the long run, you won’t have the same number of winning and losing bets. On an American roulette wheel, over 100 spins, you’ll see about 47 winning spins and about 53 losing spins.

But over the course of 1000s of spins, you will get into the long run. And the D’Alambert System will eventually become a net loser.

Still, it’s a fun system, and a little less likely to result in the eventual huge losses you’ll see using the Martingale System.

The Fibonacci sequence turns up in nature and in math more often than you’d expect. Computer programs use the sequence for search techniques, data structures, and graphs of systems. In nature, the branching of trees, the leaves of plants, and fruit sprouts often follow this sequence.

The Fibonnacci System in roulette uses a little bit of magical thinking. Since this sequence is so popular in nature, it stands to reason that arranging your bets according to that sequence will result in winning more often at roulette. It doesn’t work in the long run, but it can be a fun way to play. It can also win in the short run.

Here’s how the Fibonacci System in roulette works:

When you finally win a bet, you cross of the last 2 numbers in the sequence and set your bet at that number. In the above example, say you win the $50 bet. You’d cross the $50 off the list and the $30 off the list. Your next bet would be $20.

If you were to continue losing, it would eventually star tot look like this:

Like the Martingale System, the Fibonacci System eventually presents you with a long losing streak and a large bet.

Really, the Fibonacci System isn’t much better or worse than any of the other systems on this list. It’s a little more complicated involved, but not much.

But there’s no magic to the numerical sequence that enables it to beat the house edge in the long run.

The Hollandish System is another system where you increase your bet size after losing bets.

But instead of re-sizing your bet after each spin, you place 3 bets at each betting increment.

Here’s how the Hollandish System works:

You start by betting $10 on one of the even-money options at the roulette table.

You don’t increase your bets until you’ve won, but once you’ve won, you’ll place 3 bets at the next level of the system. The goal is to recoup any of your previous losses.

You continue to increase your bet sizes until you’re profitable. At that point, you start betting $10 again.

The progression continues until you’re either in the black or you run out of money.

This isn’t my favorite roulette system. It seems needlessly complicated. I get a little bit of a headache just trying to explain it. I can’t imagine trying to use it.

Finally, I present Oscar’s Grind, which is an easy to understand system. The main thing to remember is that as soon as you’re up a single unit, you go back to the beginning.

Oscar’s Grind has you raising your bet by one unit until you eventually get to 4 units. You don’tt raise your bets when you lose. You just keep moving through the stages.

You raise your bets after a win.

If you win the next bet, you’re back to break-even. But since you won, you move on to bet $30.

This is a fun little system that makes the game more interesting. The main downside is that you don’t need a very long losing streak to fall behind.

The best roulette systems are labelled “best” because they’re fun and interesting. Some of them are more effective at winning in the short run than others.

But they all have one thing in common:

They won’t help you win in the long run.

Roulette is a negative expectation bet, no matter what kind of betting system you use. That doesn’t mean you can’t have fun and win in the short run with one of these systems.

My favorite 2 systems on the list are the Martingale and the D’Alambert. Your mileage may vary.