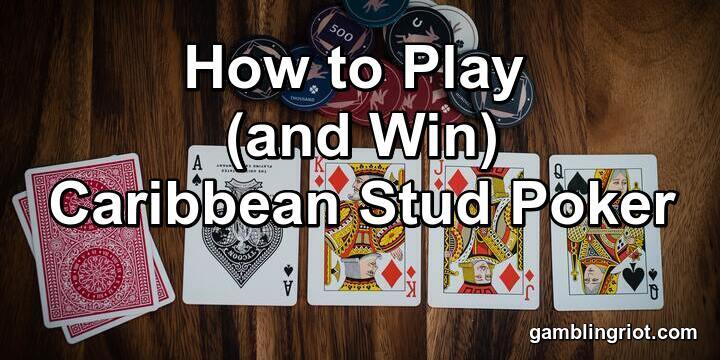 Caribbean Stud is a popular casino table game based on simple poker rules. Learning how to play (and win) Caribbean Stud means learning the rules, the odds, and a few simple strategy tips.

What Is Caribbean Stud?

Caribbean Stud borrows the rules of five-card stud poker and applies them to a Vegas-style gaming table. In Caribbean Stud, each player at the table competes only against the dealer, like in blackjack.

Besides the availability of some unique side bets, Caribbean Stud follows traditional five-card stud rules closely, with a mix of face-up and face-down cards dealt with each player.

Though not a popular game in traditional poker rooms, Caribbean Stud Poker as a table game is a standard feature in US casinos and is also popular online at American-facing online casinos.

What Does the Name Caribbean Stud mean?

It’s a fun tradition in poker rules to name games after the place where they were first played or popularized. Something about the regional nature of games of skill led to a hyperlocal naming tradition. Think of games like Texas hold ’em, Chicago, and Omaha.

The same goes for Caribbean Stud, which was first popularized (among American gamblers) on the island nation of Aruba. First exposed to the game during the warm glow of a beach vacation, US tourists spread the game by word-of-mouth and eventually wanting to play the game in American casinos.

Why Should I Play Caribbean Stud?

Caribbean Stud is easy to learn, easy to play, and softens poker rules for casual gamers who may be intimidated by the poker room.

Removing the “dog eat dog” element of traditional poker allows the bettor to focus on just their own hand and that of the dealer.

Also, plenty of casual gamblers look for slower paced games, and Caribbean Stud is famous for the slow pace at which it is played – strategy guides suggest that 35 rounds per hour are about average. After reading this guide and watching a round or two of live play, you should feel totally confident placing wagers.

How Much Does Caribbean Stud Poker Cost to Play?

The house edge on a standard Caribbean Stud table is 5.22%.

Yes, pay tables and house rules vary according to location, but this is a good number to consider when considering beating the casino at this popular table poker game.

A casino edge of 5.22% puts Caribbean Stud outside the domain of gamblers playing for an advantage. Having said that, many options on a casino floor offer a steeper edge to the house.

Compare Caribbean Stud Poker to roulette or craps, and you’ll see some clear advantages to choosing this table game over others. Bettors who stick to advantageous situations will recognize that this game is about par with even-money bets on other table games.

At a normal table that gives the house a 5.22% edge, a bettor placing those $10 minimum wagers (and following basic game strategy) should expect losses of around $20 an hour. That’s cheap entertainment considering the average cost of a night at the movies or a day at a theme park.

How to Play Caribbean Stud

The game of Caribbean Stud uses a standard poker deck. Your purpose, as a player, is to beat the dealer’s hand after two rounds of betting. Hands are ranked according to traditional poker hand values, and though pay tables may vary a little, every table follows the same basic rules.

A round of Caribbean Stud Poker gambling begins with a wager known as an ante. The ante is the player’s first move and counts as your “buy-in” to the next round.

In most modern casino versions of the game, players are offered a progressive side bet for an additional $1. The top prize of every table of Caribbean Stud is this progressive jackpot that grows over time until someone wins it. I discuss this side bet further down the page.

After antes and side bets are settled, each player (including the game’s dealer) receives five cards. One of the dealer’s cards is dealt face-up – other than that, no other cards at the table are visible.

What about the other players at your table?

Ignore them – their result occurs independent of yours and won’t affect you in the least.

By folding, you’ll end the game and lose your ante.

By placing an additional wager, you’re continuing the contest.

How should you make this decision?

This is the crux of the game – by looking at the quality of your five-card hand and considering the strength of the dealer’s face-up card, you’ve got to decide whether to forfeit your initial bet or push ahead for greater winnings.

Basically, if you think your hand is strong enough to beat the dealer, you should place a second bet.

If not, it’s time for you to fold and cut your losses.

Caribbean Stud is distinct from poker in another important way:

The size of the second wager is fixed.

In this table poker variant, the second wager is always double the size of the table’s ante. The size of that ante depends on the rules of the table you’ve chosen – in Vegas, it’s typical for tables to require a minimum bet of $10 and set a maximum of $2,000. Betting at the table minimum, you’d ante $10 to get the ball rolling, then bet another $20 to try your luck against the house, for a total outlay of $30.

Bettors who place that second bet are treated to an immediate reveal of the dealer’s hand. At this point, the game is over, but there’s a catch:

Don’t be too salty about this late folding rule – you’ll still win a 1:1 payday on your ante.

What happens when the dealer folds?

The winnings on your second, larger bet.

When the dealer’s hand fails to qualify, your second bet is a push, meaning it goes right back into your pocket with no additional winnings.

When the dealer’s hand contains at least an ace and a king, his hand qualifies, and payout occurs according to standard poker rankings. Your ante wager will still payout at 1:1, but the quality of your winning hand after the dealer’s hand will determine your payout.

You’ll want to check the paytable for the specific game you’re set to play, but generally, the paytable will look something like this:

An Example Caribbean Stud Poker Round

A gambler walks up to a typical Vegas-style Caribbean Stud table. She places her $10 ante (the table minimum) and draws three queens. Confident against the dealer (who is showing a king), she makes that fixed second bet of $20, and the dealer reveals two pairs of kings, a fully qualified hand. The bettor collects $70 – $10 for her successful ante and $60 for her winning three-of-a-kind.

Why didn’t the gambler in this example place the progressive side bet?

Progressive bets are almost always sucker bets, and the same is true here.

Gamblers have the option of placing a $1 side bet at the time of their ante. The side bet pays out if the player is dealt a specific hand (flush, full house, four-of-a-kind, straight flush, or royal), with the size of the payout depending on the quality of their hand.

The lowest payout for this additional side wager comes with hefty odds – statistically, the odds against drawing even a flush are 508:1.

If you want to play this progressive side bet, be sure, you understand the associated rules and pay tables.

How to Win at Caribbean Stud Poker

Caribbean Stud is not a strategy-intensive game, and luck is a big factor. That makes it a perfect fit in the table games section and a bad game for players hunting for an advantage. Still, it’s important to enjoy your time gambling, so I offer a few rules of thumb to help you do that:

1- Raise with a Pair or Greater

If you get a pair, even a small pair, place that second wager.

By the same token, you should probably fold your hand if you hold anything smaller than A-K. Some bettors will fold their smaller pairs or even an A-K hand, but there’s strategic value in playing those hands against a dealer that may qualify a totally useless hand.

Caribbean Stud isn’t a time to become a conservative gambler – go ahead and trust those low pairs.

If the strategy is all about minimizing losses, placing the progressive bet is a bad idea.

The house edge on this side bet is 26%. These are bad odds, among the worst in any gambling hall on the planet.

While the $1 bet may seem small, especially compared to the $10 minimum bet, you’re looking at an average of $35 an hour spent exclusively on a long-odds proposition.

Plus, by avoiding the progressive wager every hand, you’re cutting into the casino’s edge just that much more.

The payouts for progressives are appealing. But remember this:

They’re in the casino’s best interest and not your own.

Good bankroll management will prevent you from spending too much and acts as fun insurance. Setting an hourly loss limit, or a limit of your total gaming losses for the day or the trip, is as much about protecting the entertainment value of gambling as it is about protecting your bottom line.

The same goes for win limits. So, if you’re lucky enough to take a big payout on a hand of Caribbean Stud, your victory will be all the sweeter by virtue of having not stuffed it right back into the casino’s coffers.

Managing your money better won’t make you win more at the tables, but it will help you enjoy it.

Caribbean Stud isn’t as heavily represented on casino floors as it once was. But basically, every online casino offers it, And it’s far more common in casinos outside of Vegas and Atlantic City.

The game is easy to learn, an entry-level contest that takes seconds to learn. As a luck-based game, with only some small element of skill involved in deciding whether or not to place the second bet, it’s a favorite of newcomers and casual bettors.

Serious gamers overlook it, mainly because of the lack of head-to-head competition. But it’s a classic for a reason – this game is fun.

Caribbean Stud Poker is the casino’s version of a schlocky horror movie or a daytime soap opera.

Featuring better-than-average odds, provided they follow our basic strategy tips above. This slow game made an impression on American tourists decades ago. And it continues to thrill with simplicity and potentially huge payouts.