You’ll find plenty of pages on the Internet about casino games. Most of those pages list the main 5 or 6 games you hear about all the time, and that’s it. I’ve set my goal a little higher–to create the most complete list of casino games ever.

I’ve organized this “most complete list of casino games ever” according to rough categories based on what made sense to me. You’ll also find descriptions of each gambling game and the pros and cons for players.

You can consider this post a close companion to my post about the 7 best online casino real money games, which offers suggestions about which games are worth gambling on for real money on the internet.

This post is probably more of work in progress than most of the posts on the site. That’s because people are inventing new casino games all the time. 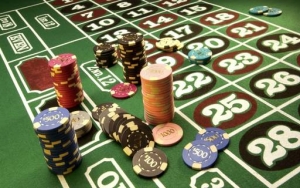 I should point out that this list of casino card games doesn’t include poker games where you play against the other players. I’ve devoted this page to casino games. The house banks those games, rather than the other players at the table.

The list does include poker games where the house acts as the bank. In such games, the players compete against the dealer rather than against each other.

Dice games like craps aren’t as popular as they once were, but you’ll still find plenty of people rolling the bones in the casino. Here’s as complete a list of dice games played in the casino as I could think of:

In most modern casinos, gambling machines account for over 70% of the casino’s revenue. Most of these games are slot machines, but not all of them.

I love casino games with spinning wheels even though the house edge on such games is usually high.

You can find a tremendous number of casino games. Some of them are here today and gone tomorrow. Others seem to stick around forever.

The goal of this post was to offer you the most complete list of casino games ever.

Let me know in the comments if you think I’ve succeeded.

5 thoughts on “The Most Complete List of Casino Games Ever”