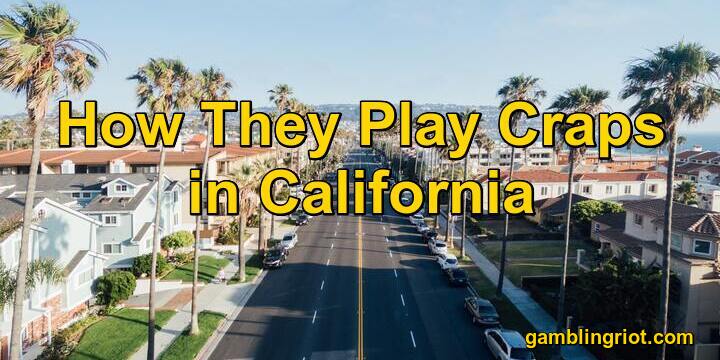 The game of craps in California casinos doesn’t use dice. This might be confusing to some of my readers, so I thought I’d write a blog post about California craps games.

This post examines how California craps is played and why the odds aren’t really any different — even though they’re using a different mechanism to arrive at the outcomes.

Also, if you love “shooting dice,” you might want to play craps in a different state.

You can play craps online for free, no matter which state you live in. And when you play for real money, you’ll get a 350% deposit bonus on your first deposit. WildVegasCasino.

Craps in California Is Played with Playing Cards, Not Dice

In some states, it’s illegal to use certain devices for gambling purposes. Until recently, Oklahoma didn’t allow spinning wheels or dice, but it did allow cards. They’ve recently changed their laws regarding that, so now you can shoot dice and play roulette in Oklahoma just like everywhere else.

But California still doesn’t allow casinos to use dice.

They still want to offer craps, though, so they use a deck of cards as a workaround.

You can use a deck of cards to duplicate the odds in a craps game in 2 different ways:

You still have the same probability for each of the 2 “dice” this way — each number comes up 1 out of 6 times.

You also have the same bell curve that you’d see when rolling a pair of dice.

The other way is to have a deck consisting of 36 cards, each of which represents a possible outcome of a die roll. This is the method that the Winstar used until recently.

Why Are There 36 Possible Outcomes in California Craps?

There are 36 possible outcomes in craps of all kinds, not just in California craps. Understanding that is the key to understanding how craps probability works.

You only have 11 possible totals in craps:

But some totals can happen in multiple ways.

But look at the probability of rolling a 3. You have 2 ways you can get an outcome of 3:

It might not be immediately or intuitively obvious why that’s 2 different ways of accomplishing this, but that’s why you have a bell curve in craps.

The least likely totals are 2 and 12.

The totals of 3 and 11 are the next least likely outcomes.

Finally, the most common outcome is 7 — you have the following ways of getting a 7 on a roll of two dice:

No other combination of dice has that many possibilities.

An Example of California Craps at the Pala Casino

The Pala Casino uses a deck of 36 cards, each one of which is mapped to a combination of 2 dice. The craps dealer deals 2 cards, one in a blue box and one in a red box.

The shooter still gets to roll dice in this version. One of the dice is blue, the other, red.

The die with the higher number determines which card determines the outcome of the throw.

It’s funny how the casino still uses dice, but they’ve added the cards to randomize the outcome for legal reasons. The Pala Casino’s version of craps probably “feels” more like craps than other versions.

You could, in fact, just draw a card from either of those decks and have an outcome in line with the probabilities involved in craps.

But that would make the gameplay so fast that it wouldn’t feel much like craps at all.

Craps at the Viejas Casino

When you play craps at the Viejas Casino, NO dice are used for any reason. This version of craps isn’t even played at a craps table. Instead, it’s played at a table that looks more like a blackjack table.

This version of craps uses 264 playing cards numbered 1 through 6 dealt from a continuous shuffling machine. The cards get put back into the shuffler after every roll.

But there’s a catch with the Viegas Casino craps:

Some of cards remain in the shuffle’s chute after each deal, so multiple rolls are dealt at one time.

What does this mean, probability-wise?

It slightly changes the odds by removing some of the possible outcomes. You just don’t know which outcomes have been removed.

The don’t pass bet becomes a better bet than it already is, so if you ever play at the Viejas Casino, stick with being a wrong bettor.

My daughters sometimes ask me, “Dad, why are you like this?”

They’re usually frustrated with me, and I get that. I’m frustrating, as people who are from a different generation often are.

But why are California casinos the way they are?

California passed a constitutional amendment in 2000 legalizing gambling on American Indian land. Each tribe negotiates its own arrangement (a “compact”) with the state government regarding what games and activities they can offer.

Some types of gambling are more acceptable than others.

California law is specific about one thing, though:

You can’t determine game results using dice. This would seem to eliminate craps because this law applies to Indian casinos.

The only way California casinos can offer craps at all is to modify their versions of the game to use playing cards instead of just dice. Even in casinos that allow the players to throw the dice, the outcome of the dice only determines which cards get drawn.

It’s a weird loophole. Casinos can use dice to determine part of the outcome, but the playing cards are like a buffer that keeps the dice from determining the final outcome.

Can You Count Cards in California Craps?

The first question that springs to my mind when I find out about card-game-based craps is whether I can get an edge at the game by counting cards.

This would be possible if you didn’t face a casino that shuffles the deck after every “roll of the dice.”

The way card counting works in blackjack is by keeping track of which cards have been dealt in a general way — high versus low. Aces and 10s in blackjack are considered high cards, and they’re better for the player. When a lot of them have already been played relative to the lower valued cards, you should bet the minimum.

But when a lot of low cards have been played when compared to the high cards, it’s time to raise your bets.

In other words, you don’t keep up with specific cards that have been played or that are left in the deck.

Theoretically, if you found a casino that didn’t shuffle the deck every time a card got played, you might be able to get an edge by betting one way or the other.

Imagine, if you will, a huge deck of cards where most of the cards that resulted in a 7 were already gone from the deck.

Would you know which bet would offer you an advantage in that situation?

That’s what I thought.

What’s the House Edge for Craps in California?

In Oklahoma, the casinos charge an ante for playing table games. That ante increases the house edge dramatically, but it’s based on how much you’re betting on each round. Usually, the bigger your bets are, the less of an effect the ante has on the house edge.

As far as I know, though, California craps doesn’t require an ante.

Since the odds of getting all the various results at a craps game in California are the same as they would be if you were rolling 2 dice, the house edge is the same, too.

In other words, stick with the pass, don’t pass, come, don’t come, and odds bets. All those bets have a house edge of less than 1.5%.

And you also want to avoid the prop bets that are also available in card-game-based craps. Stick with the simple, boring bets because those are the bets offering the best odds for the player.

In fact, the house edge on many of these proposition bets at the craps table is in excess of 10% and closes in on 20% in some instances.

You don’t need to play games with such lousy odds, ever — in California, online, or anywhere else.

Can You Play California Craps Online?

Can you play California’s version of craps online? Let me ask you a better question… why would you?

I did some research and couldn’t find any online casinos offering California craps. This version of craps was originally adapted to meet the state’s brick and mortar gambling laws so there isn’t really a demand for the altered game online.

A lot of craps players consider California craps, not a “real” craps game. This is up for debate, especially among players who love California’s version of craps. I’ll keep an eye and if I do run across an online casino that starts offering California craps I’ll update this post.

I hope I answered all your questions about craps in California. Have you played California craps?

If I left anything out, or if you have something you’d like to add, I’d love to hear from you in the comments section.