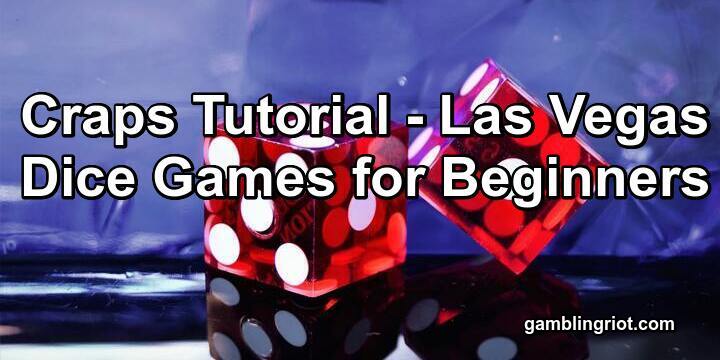 Are you a beginner to Las Vegas dice games? If so, this craps tutorial is for you.

I cover the basics of how to play craps in one of my other posts, but I want to expand on some of the information in that post in this tutorial.

The Easiest Way to Understand Craps Is the Pass Line Bet

First, think of craps as being a game that’s played in rounds. A round starts when the shooter — the person throwing the dice — make a come-out roll. That’s the first roll of the dice in a round.

The basic bet in craps is the pass line bet. It’s just a bet that the shooter will “succeed.”

How do you define that success?

If he rolls any other number, his goal is to keep rolling until he rolls that total again or rolls a 7. If he can avoid rolling the 7 before rolling the point number, a bet on the pass line pays off at even money.

That’s the whole game in a nutshell.

Everything else about craps relates to the other kinds of bets you can place.

The Basic Game of Craps

But the basic game boils down to this:

Craps is WAY simpler than you, though, right?

The other big bet at a Las Vegas craps table, though, is the don’t pass bet. You can think of that as betting on the shooter to fail.

In other words, on the come-out roll, if the shooter rolls a 7 or 11, the don’t pass bet loses immediately.

A 12, though, is treated as a push on the don’t pass bet. You get your bet back, but you don’t get any winnings. At least you didn’t lose your bet, though.

If the shooter rolls a 2 or 3, the don’t pass bet wins immediately.

My favorite bet at the craps table is one that isn’t listed on the table. It’s called the odds bet, and you can only make this bet after the shooter has set a point.

You take odds after a shooter sets a point if you made a pass line bet.

You lay odds after a shooter sets a point if you made a don’t pass bet.

To make this bet, you just put it on the table behind your original pass or don’t pass bet. Ask the dealer if you need help.

The great thing about this bet is that it pays off at its true odds — in other words, it doesn’t have a house edge.

If the only bet you ever made in the casino was the odds bet, you’d break even over time.

The Strategy Section of this Craps Tutorial Starts Here

The first thing to know about craps strategy is that you should always bet as much as you can on the odds bet.

The reason you want to get as much money into action on the odds bet is that it reduces your overall house edge dramatically.

Payouts for the Odds Bets

Here are the payouts for the odds bet:

The payout odds on that bet are exactly the same as the odds of winning.

Why Does the Odds Bet Break Even in the Long Run?

That’s why it’s a break-even bet.

Let’s look at why that is for a minute:

Suppose the point is 6. What are the odds that you’re going to roll a 6 before rolling a 7?

You don’t have to worry about any other results. None of them amount to a win or loss.

You can roll a 6 in the following ways:

How many ways can you roll a 7?

Over time, that bet will break even.

This holds true for the other odds bets, too.

The casinos have set the odds up for the game in such a way that you’ll lose in the long run. Even when you throw in the odds bet, you have to place a negative expectation bet to take that odds bet.

Your overall expectation is still negative.

What about abnormal craps players?

I’ve read several accounts of players who qualify as “rhythmic rollers” — at least, that’s what gambling author Frank Scoblete calls them. He claims that you can tell who the rhythmic rollers are by watching their results.

Other craps experts offer to teach you how to become a rhythmic roller. The idea is that you become good enough at setting the dice and throwing them softly enough to shift the odds.

If you could exert some control over the outcome of the dice, you could turn craps into a game of skill in the same way that darts is a game of skill. There’s a random element to it, but you’ve reduced the element of chance.

And since the house edge for the basic bets in the game are already really low, you don’t have to affect the odds by much to flip that house edge into an edge for the player.

How do you get good at dice setting or dice control?

The same way you get to Carnegie Hall:

I suggest buying or building a craps table that has the same dimensions as a casino craps table and practicing in your garage or basement.

If you leave this craps tutorial with one resolution, I hope it’s this one:

I won’t place sucker bets at the craps table.

I didn’t cover the come and don’t come bets in this tutorial, but they’re basically the same thing as the pass and don’t pass bets. They just treat the next roll as if it were a new come-out roll, regardless of where you’re at with the rounds.

Those are the only bets worth making at the craps table, though:

None of those bets has a house edge greater than 1.5%.

All the other bets at the craps table have a significantly higher edge for the house.

In fact, the edge is so high on those other bets that the casino has a staff member on hand whose job is to encourage you to place those bets. Pay no attention to the guy at the craps table who’s providing the chatter and narration.

He’s the casino equivalent of Vince Offer. If you thought Sham Wow was a great deal, then you might be okay taking some of the proposition bets available at the craps table.

You’ll be making a big mistake, though.

I hope this craps tutorial provided you with the insight and skill you need to play craps in Las Vegas for the first time in 2019.

If you still have questions about the game, leave them in the comments, and I’ll answer them for you.