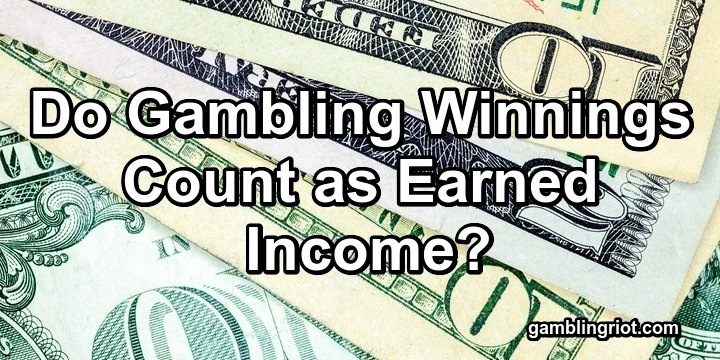 Rarely does a casino gambler consider what happens following a significant casino score. They may spend hours dreaming about spending their new money, but they aren’t inclined to weigh the financial implications. They need to ask themselves, do gambling winnings count as earned income?

I’ve spoken to several gamblers through the years who were dismayed by the final amount of their jackpot win. These casino patrons never weighed the outside influences that would later impact their vast success.

It seems logical that the IRS would tax your casino wins. If there’s one thing I’ve learned about governments, it’s that they will take any opportunity to bring a few more dollars in the door.

Yes, gambling winnings DO count as earned income. And there are stiff penalties for not adhering to federal guidelines. Let’s examine the way casinos and the IRS handle taxes wins and tips for making those wins go further.

You’ve Just Won a Huge Pile of Cash, Now What?

The first thing casinos will ask you for on wins over $5,000 is two forms of identification. That allows the casino to file the standard W-9.

They don’t tie this form directly tied to any money; it’s simply for the casino and the IRS to know who the casinos are paying. If you left your social security card or passport at home, the casino would hold the money for you for up to 90 days.

The casino will then help you in procuring your wins, and typically you’ll get most of the cash immediately. You’ll be offered your prize via check, cash, or casino chips.

The most prudent play is taking the check and putting that money in the bank. However, I understand that’s unrealistic for many gamblers.

So, most players will take a check and cash hybrid payment. Unfortunately, you’re going to see less money than you won in many instances.

Do Gambling Winnings Count as Earned Income? Yes, You’re Going to Take a Hit on Your Win

The standard tax rate on gambling wins is 24%.

For non-residents, that number jumps to 30%.

Some players become irate that the federal government insists on taking such a substantial piece of their lucky wins. Still, I’d always rather have 76% of a jackpot than zero.

It’s best to know beforehand. That will soften the blow when the reality sets in and you go to collect your wins.

If you think that you’ll merely take the cash and skip town, that may be impossible. Most casinos will force players to complete a W-2G before collecting their wins.

The Casino Will Likely Have You File a W-2G

The W-2G is the federal tax form designed to track individuals’ gambling winnings. This money is earned income and, as such, is subject to the same tax laws of other income.

When the casinos have players file, a W-2G varies depending on how they made their money. It all comes down to the casino as far as when you’ll file the appropriate paperwork, but there are basic parameters most U.S.-based casinos follow.

Here are a few examples of when you’ll be expected to complete a W-2G before cashing out:

The $5,000 threshold in poker does not apply to cash games. But those winnings are still required to be reported to the IRS for tax purposes.

Also, the same $1,200 or higher figure for the slot machines applies to bingo. You need to make sure your nana knows to report her wins, or she may receive an audit.

The 300x or higher guideline most directly pertains to sports betting and table games but serves as a blanket rule for all areas of the casino.

Remember that regardless of whether or not the casino makes you document your wins, they need to get reported when you file your taxes.

Some Casinos Take the Governments Cut Off the Top

Many casinos will take 24% off the top and cut the IRS a check on your behalf. This service may seem like a way for the casino to pay you less than you’ve won.

In reality, having your tax bill paid automatically takes the burden off the player. Imagine winning $6,000 in February; you won’t file taxes on that money for over a year.

It’s not unreasonable to see how some players may forget about the wins or become confused about whether the cash applied to the previous year. However, the IRS knows when the money is due and expects payment in full.

You don’t want to be caught off guard when the tax professional you’ve hired alerts you to the $1,500 you owe the federal government. I’d prefer to have the casino pull the cash straight from my gambling winnings and pay the IRS.

Gamblers Are Required by Law to Report All Winnings

Anything you win gambling is subject to federal income tax. Your gambling wins come at the standard 24%, but players sometimes win prizes in place of cash.

What happens when a player wins a car or a new boat in the casino?

The IRS doesn’t need another boat or a new sports car, so they take a piece of the prize another way. Winners get taxed on the value of the prize with one substantial difference.

Your prize gets taxed at 33% instead of the more standard 24%. That can add an additional burden to players; most winners are forced to sell the prize to cover the taxes.

The point is that even when you’re not winning money, you’re required to report all winnings.

Luckily, Your Gambling Losses Are Deductible

Before you start losing all hope, I have good news. In the same way that your gambling wins are taxed, your losses may be deductible.

A couple of rules pertain to this stipulation. First, you cannot be a professional gambler and report your losses as deductions. Second, you can’t claim the standard flat deduction.

Many of us use the flat deduction to make the tax filing process less complicated. But if you want to claim all of your gambling losses, you need to file an itemized tax return.

You’ll also be asked to report all winnings and losses independently. You must claim your wins as income and your losses as a deduction.

Players often make the mistake of merely subtracting their total losses from wins and claiming that number as earned income. It makes complete sense but will raise red flags with the taxman.

Because you have a lot resting on your total wins and losses, it’s vital to keep detailed records on gambling winnings and losses.

Each time you gamble on anything, you should keep a detailed log of all losses or wins. That includes pay stubs, bank withdrawals, and all expenses associated with the trip.

Yes, you can write off travel and accommodations as part of your losses. Taking these steps may not do much for the typical recreational gambler.

The hardcore casino patrons will benefit from taking the maximum benefit allowed. That’s especially true for players who won a significant prize.

The more you’re in the casino, the smaller the wins for the year will become. You’ll be leaving a chunk of money on the table by not receiving credit for your losses.

What Happens When Players Refuse to Pay?

Depending on your situation, refusing to pay taxes on your casino winnings will typically amount to nothing. That’s not to say that you shouldn’t report all income, but a $2,000 slot machine prize may not catch the IRS’s attention.

They have much bigger fish to fry than hunting down players that had a good night in Vegas and refused (or forgot) to share. Still, repeatedly failing to report gambling winnings on your income taxes could become an issue down the line.

The IRS is most likely to go after only the most egregious offenders, which leaves the once-a-decade winner in the shadows. But I’m not keen on the idea that the IRS could come knocking at any moment.

I recommend you seek counsel from someone qualified to advise on the matter, like a tax professional. The tax laws dictate that winners report all gambling winnings as earned income.

I also advise you to pay your taxes. Risk assessment and decision-making is up to you, but I always advise you to obey the law — including the tax laws.

They do, and they always will. That’s not a massive problem for the majority of us. But my first order of business will be hiring a team of lawyers, should I ever win the lottery.

I know what a bummer it can be to have thousands pulled out of your pocket by the federal government, but it beats never winning at all.