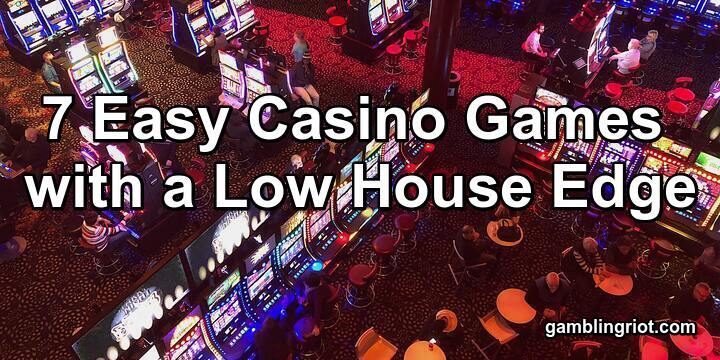 But you should also choose games with a low house edge.

My goal with this post is to give the beginner to gambling some options to choose from in the casino that don’t require a lot of skill. But I also want the beginner gambler to have a decent shot at winning some money.

The games with the lower house edge are the ones where you have the best chance of winning some money.

What is the house edge and how does it work?

The house edge is a statistical prediction of how much money you can expect to lose from each bet. It’s based on the difference between the odds of winning and the odds that are paid out.

Let’s look at an easy example:

In roulette, you have a 37 to 1 chance of winning a bet on a single number. That’s because there are 38 total numbers on the wheel. Only 1 of them is a winner, the rest are losers. That’s why the odds are 37 to 1.

If you want to figure out the average amount of money you can expect to lose, you can calculate it this way:

Of course, these are just estimates. In the short run, anything can happen, and in fact, if you look at enough of a short term, it’s impossible to see results that even come close to the expectation.

Here’s an example of that:

You place one bet for $100 on a single number on the roulette wheel. You only have 2 possible outcomes:

But statistically, you’re supposed to lose $5.26.

Even if you increase that to 2 spins, it’s still impossible to see the predicted result. Here are the possible outcomes:

None of those outcomes come even close to your expected loss of $5.26.

Your actual results only start to resemble your house edge over the course of hundreds–maybe even thousands–of spins.

The casino counts on this in 2 ways:

Now here are some easy games to play with a relatively low house edge:

Baccarat is an easy game to play because it requires no skill. You sit down and place your bet on one of the following 3 options:

Baccarat has silly, complicated rules for determining how the game plays out. But at the end of the day, it’s all about who has the better hand–the banker or the player. You can bet on either.

The banker bet has a house edge of 1.06%. That’s almost as low as blackjack. In fact, if you’re not good at basic strategy in blackjack, your house edge at that latter game is probably worse than the house edge on this bet.

The player bet, on the other hand, has a house edge of 1.24%. That’s not terrible, but it’s not as good as the banker bet. You should opt for the banker bet every time.

Finally, the tie bet is awful for the player. The house edge is 14.36%, which makes it one of the worst bets in the casino.

The only skill necessary to achieve that 1.06% house edge in baccarat is the ability to stick with the banker bet every time. That’s the only strategy for the game. Other than that, it’s entirely random.

The pass line bet in craps has a house edge of just 1.41%. Craps, like baccarat, doesn’t require much skill from the player other than being able to choose the best bets. The don’t pass bet is slightly better, with a house edge of 1.36%.

I normally recommend staying away from any bet with a higher house edge, but craps is an exception.

You can make the effective house edge of this bet even lower by taking the odds bet every time. This bet is always a multiple of your original pass or don’t pass bet.

But the odds bet has a house edge of exactly 0.

This creates a situation where your overall house edge is even lower.

The house edge at a standard American roulette table is 5.26%, which is honestly a little rich fr my blood.

But if you can find what’s called a “European” roulette wheel–one that only has a single green 0, the house edge is only 2.70%.

You can even do better than that if you can find a casino which has the “en prison” rule in effect. That reduces the house edge to 1.35%.

It only applies to the outside bets at the table:

If the ball lands on a loser, instead of losing your bet, it’s placed “in prison”. It doesn’t lose unless it loses again. This cuts the house edge in half.

You’ll still lose in the long run, but you won’t lose as fast.

Sic Bo is a fast-paced Asian dice game where you bet on the outcome a roll of 3 dice. The only bet you should consider making at Sic Bo is the “big” or “small” bets. The house edge on each of those is 2.78%.

Here’s how those 2 bets work:

Most of the other bets at Sic Bo are awful. Some of them has a high house edge as high as 30%.

I think most players will enjoy craps more than Sic Bo, but still, Sic Bo requires no skill to play. And the odds aren’t awful.

Blackjack is more complicated than most of the games on this list, as it requires making the correct decisions to achieve the low house edge. The right decision for every situation in blackjack is called “basic strategy”.

If you play blackjack with perfect basic strategy, the house edge can be as low as 0.5%. It might be 1%, depending on the rules in place at the table. If you ignore basic strategy and just stick with your hunches, blackjack isn’t such a great game at all. You’re looking at a house edge of probably around 4%.

Why did I include it on a list of easy casino games with a low house edge?

As long as you don’t hold up the game by playing slowly because of the basic strategy card, the casino won’t give you a hard time at all.

The charts are color-coded to make them easier to understand, too.

I’m not a fan of casino war, because the game plays super-fast. And one of the biggest things to affect your average hourly loss at a casino game is the number of bets you’re making per hour. Since casino war is such a fast game, you’ll probably be making a lot of bets per hour.

I’ve seen some sites estimate the number of hands per hour at casino war at 900 per hour. That’s ridiculous and almost certainly untrue.

I’ve also seen sites suggest that the game averages 65 hands per hour. I can’t believe that, either.

At the blackjack table, on the other hand, you’re looking at 70 hands per hour. You’re only putting $7000 into action per hour. And since the house edge is only 1% when you’re using that little basic strategy card from the casino, you’re only expected to lose $70/hour.

So even though I’m recommending casino war as a low house edge game that requires no skill, I think blackjack is a far better choice. It just requires more skill to play well.

Spanish 21 is the hardest game on this list because it’s basically a variation of blackjack with a bunch of rules changes. Even if you know how to play blackjack well, Spanish 21 is an adjustment.

As luck would have it, the house edge for Spanish 21, if you play with perfect basic strategy is 0.76%. You might even find a table where the rules variations are a little more favorable for the player, in which case the house edge is 0.4%.

Here’s one thing to think about as you leave this post:

The house edge matters, but not that much. If a casino game has a house edge, and if you play it long enough, you will eventually lose all your money.

A more accurate way to analyze a casino game’s odds is to look at your expected hourly loss. That formula is simple enough, too:

It’s possible that a game might offer a lower hourly predicted loss even if it has a higher house edge. That’s become some games play much more slowly than others. For example, at a busy roulette table, you’ll be lucky to place 40 bets per hour.

But an average slot machine player gets in 600 spins per hour.