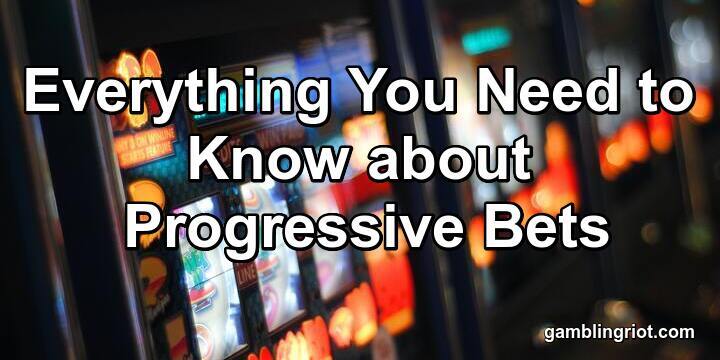 I give a lot of Vegas advice, including advice about progressive bets. I’m the degenerate gambler in the group, the guy with the most casino experience, and I talk about games of chance often enough that when someone plans a weekend getaway to Sin City, I’m the guy they come to.

I act like it bothers me a little, but to be honest, I wouldn’t want it any other way.

Giving some advice recently, I found myself on a tangent about progressive bets. That got me thinking about how much progressives changed the industry, and how that change predicted the much larger changes caused by widespread Internet access just a couple of decades later.

Lost in a daydream, it came to me that I have a lot of things to say about this popular jackpot format. That means it’s time to write a blog post detailing my thoughts on progressive bets.

In the mid-80s, the casino games manufacturer IGT developed something outlandish. By connecting slot machines to one another using phone lines (sound familiar, fellow Internet-obsessed citizens?) they could have these machines communicate to one another. What’s the use of that?

IGT’s Megabucks slot had a top prize like no other game in the world. A prize that grew a little bit every time someone played. A prize that had the potential to upend a gaming industry that had seen very little in the way of disruption.

A progressive prize is one that doesn’t reward a fixed amount. Instead, a progressive payout increases over time. Each time someone places a bet but doesn’t win the jackpot, the prize grows a little bit more. When a player does finally hit that progressive jackpot, the payout resets to a predetermined amount, and players can go back to chasing that ever-increasing prize.

Launched in 1985, IGT’s Megabucks had just such a progressive jackpot, and players chased it for a little over a year before the first big payday. The winner? A plumber from Reno. His progressive payout was $4,988,842.17. The date was February 1, 1987 – in 2021 dollars, that’s about $11.4 million, paid out for a single pull of the one-armed bandit.

These days, progressives don’t rely on a clunky phone line system to communicate with each other and build progressive prizes. Thanks to the Internet, you can play progressive slot games at home, with machines linked virtually across global networks. Some games now offer multi-tiered progressive jackpots, and it isn’t limited to just slot machines, either.

The prizes have grown, too.

How Much Money Can I Win with Progressive Bets?

As amazing as the infamous Reno plumber’s Megabucks prize was, it wouldn’t even crack the top ten list of largest progressive payouts in history. Web-based progressive play has completely changed the landscape, and the most obvious symptom of that change is the size of the checks casinos are cutting to their customers.

Pretty much all of the headline-worthy payouts in brick & mortar casinos these days come from progressive slot games. I can take that a step further and say that most of these ridiculous payouts come from the tried-and-true Megabucks game. Here’s a story about a software engineer claiming a $37 million prize from a $3 wager. The game? Megabucks. In this story, an active-duty soldier turns a $0.25 bet into a $15 million jackpot. His game? Mega Moolah, an early imitator of IGT’s popular Megabucks title.

Okay, so not every progressive prize is going to turn you into a millionaire. Plenty of companies use progressive jackpots to entice players to try out their game, and some of them pay out in amounts starting in the thousands or even hundreds of dollars.

Still, the fact that the jackpot ticks up literally as you play, and the specter of a huge windfall, drives players to games featuring progressives, almost to the exclusion of non-progressive gambling.

What Casino Games Include Progressive Bets?

I’ve stuck mainly to descriptions of slot progressives because slots were the foundational progressive jackpot game. Obviously, slots are big purveyors of this kind of wager.

However, you’ll also find that most state and national lotteries exist as progressive bets. You pay your $1, select your numbers, and if nobody wins, the jackpot grows. By repeating this process week after week, some lottery payouts swell into unimaginable amounts.

Because of the popularity of this kind of bet, game designers have learned to cram them into places you might not normally expect to see them. Live and online versions of table games now have progressive side bets, as simple as adding $1 to each roulette or blackjack bet in the hopes of claiming an ever-increasing payday.

What Are the Drawbacks of Progressive Bets?

I’ve managed to write most of this post without editorializing or offering much in the way of my personal opinion about progressives. At this point, I have to take that neutral hat off and consider why it isn’t always a great idea to bet this way.

The biggest drawback of placing this kind of wager is the fact that the odds against you winning are almost always incredibly long. Consider that first big Megabucks win described earlier in this post – a linked group of hundreds of machines being played around the clock at multiple casino venues took over a year to pay out the progressive jackpot everyone was chasing. How many millions of plays did it take before Joe the Plumber lucked into early retirement?

IGT says the odds of claiming one of their top progressives is 1 in 16.7 million. If that’s an accurate estimate, it means you’re 1,000x more likely to be struck by lightning than win this payout. You’re also 4x more likely to be eaten by a shark than you are to win this kind of payout.

I hope you see what I’m getting at – if you’re adding $1 to each of your bets in hopes of winning a life-altering check from the casino, you’re wasting a lot of cash chasing an outcome that is the definition of unlikely.

Here’s an example – let’s say I’m playing Caribbean Stud on a cruise ship. I’m placing $5 bets per hand and adding $1 each time for the ship’s progressive-linked top prize. At 35 hands per hour, I’m essentially sacrificing 7 wagers an hour to the gods of luck, hoping for the least-likely possible outcome.

What Are the Benefits of Progressive Bets?

The biggest benefit of progressive wagering is also the most obvious – large amounts of money available for relatively tiny wagers.

I’d like to take a second to appreciate all the amazing things I could do with, say, $20 million. I could build an amazing house on a beautiful piece of land in the Texas hill country and still have money left over to enjoy fine cigars and collect rare books or whatever. Or I could really build out my business, re-invent myself as a business tycoon, and blog full-time. I could buy pretty much whatever I wanted and not have to worry about it.

Yeah, it’s easy to see the appeal of the winnings. I don’t need to lecture anybody on the benefits of having money.

If progressive bets make your entertainment money stretch a little further, then it’s a good thing. If, by placing a progressive bet, you’re going to have a better time on your trip to Vegas, by all means do it.

Anyone who tries to moralize you or browbeat you into never placing a progressive bet is taking themselves too seriously. Think of the Caribbean Stud example I gave earlier – what’s an extra $35 an hour if I’m having the time of my life?

As soon as your gambling becomes less of a fun thing and more of a frantic errand for profit, it’s probably time to take a break.

I’m not a salesman. I don’t have an angle.

And I hope that this post shows a side of me that I’m proud of – I try to be even-handed, even when faced with something like progressive bets, which have a rotten reputation in the online gambling community.

My other hot take in life? Progressive wagers are fine, under the right circumstances.