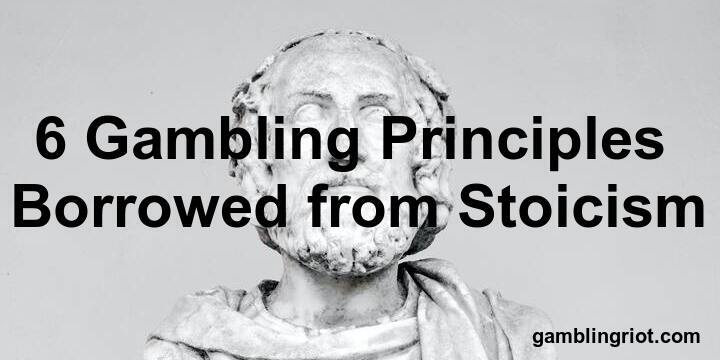 Gambling, like any other activity you engage in during your life, can be a blessing or a curse. This post aims to borrow 6 gambling principles from the philosophy of Stoicism. I believe that having a philosophy of gambling (and indeed, a philosophy of life) can improve the quality of your life.

Since this blog is about gambling, it made sense to apply a philosophy to that activity.

First, let me explain what Stoicism is:

Stoicism is a real-world philosophy that’s meant to change the way you live. Instead of reflecting on the nature of things and how we think about them, Stoicism focuses on what we DO.

You can put your gambling principles to work online right now. Get a 350% deposit bonus if you play for real money, too. WildVegasCasino.

Below, I’ve listed and explained some gambling principles that I’ve derived directly from the Stoic way of thinking.

1- Your Emotions Come from Within

The most important of these gambling principles relates to managing your emotions. The Stoics believed that your emotions about events were within your control–even when outcomes were outside your control.

I used to play poker with a great player who was nicknamed “Lobster”. He often told me, “DBSRO”.

That was his acronym for “don’t be so results oriented”.

The amount of wisdom in that simple homily astounds me. It’s deeply Stoic in nature, too.

They then spend their time, energy, and emotions on those things that they can control. In poker, you can control how much money you put into the pot. You can control whether you raise or fold in a given situation.

But you have no control over how the cards eventually fall.

If you measure your success as a player by how much you win or lose in a single session, you’ll be frustrated and angry. You’re measuring your success on something you’re unable to control.

On the other hand, if you measure your success in terms of making the mathematically correct play most of the time, you’ll have serenity. You’ll be able to play better poker than your opponents. And in the long run, you’ll win more money than they will.

Gamblers who let their emotions control them almost always lose in the long run.

So start learning Stoic gambling principles by getting control of your emotions.

Many people spend a lot of time on positive visualization. They set goals and picture themselves achieving them. This is common advice from people in the self help industry.

The Stoics have another technique that I find more useful. It’s called “negative visualization”. The idea is that you spend time contemplating what life would be like if you lost something important to you.

Suppose you’re a father, and you have a 10 year old daughter. She means everything to you.

But she can also be taken away from you at any time.

Children get sick. They’re hit by cars. Anything can happen.

Someone who practices negative visualization contemplates this possibility occasionally, imagining what life would be like after losing his daughter.

This doesn’t mean you morbidly dwell on such things, by the way. You just think about them sometimes.

There is at least 2 results:

If you’re grateful for the time you have with your kids, you’ll behave differently as a parent. You’ll spend more time with your kids. And you might even treat them better.

When you lose them, you won’t sit around regretting how little attention you paid to them. Someone who occasionally contemplates losing his children is more attentive. The parent who thinks about the worst that could happen will usually treat his children better, too.

How does this apply to gambling?

It prepares you for losing all your money. If you’re ready for that eventuality, it will hurt less when it happens.

Also, if you’ve visualized what it would be like to go broke gambling, you’ll make different decisions. The goal is to make better decisions.

If you’ve visualized losing all your money, you won’t be scared any more. You’ll be prepared. You won’t hesitate to make positive expectation moves for fear of losing your entire bankroll.

In fact, you’ll be more likely to have the rest of your finances in order so that you won’t be at risk because of your gambling hobby.

3- Realize That This Too Shall Pass

One of the gambling principles you can take away from Stoicism is that everything is temporary. Remember the $1000 you won last night at the Texas holdem tables? You could lose it today at the craps table.

I read on William B. Irvine’s wonderful blog about Stoicism that there are 2 formulas that can help you live the good life:

x = the number of days you have left to live

How does this become one of these gambling principles?

The most important thing to understand about “x” is that it’s unknown. We do know that it’s a finite number, though. And eventually, x will = 1.

In other words, one of these days will be your last day alive. You don’t know when it will be, either. So maybe you should treat every day as if it were going to be your last?

The 2nd formula is similar. The lesson to take away is that no matter what you’re doing, it might be the last time you get to do it. The next shower  you take might be the last shower you ever take. Your next meal might be your last.

The next game of blackjack or craps you play might also be your last.

If that’s the case, shouldn’t you pay complete attention?

Shouldn’t you put everything you have into that activity?

This line of thinking applies to gambling, sure. But it applies to everything in your life.

4- The 4 Cardinal Virtues are Wisdom, Courage, Justice, and Temperance

How do these virtues translate into gambling principles?

Let’s talk about wisdom first. A wise gambler only gambles money she can afford to lose. She also makes the mathematically correct decisions. This means avoiding bad bets when you can get just as much entertainment from good bets.

A wise poker player only plays good hands, and she bets and raises a lot. (She’s tight-aggressive.) A wise blackjack player uses basic strategy for her playing decisions. She doesn’t rely on hunches. A wise roulette player chooses a wheel with a single zero instead of a wheel with 2 zeroes.

Now let’s talk about courage. A courageous gambler doesn’t avoid a good bet just because it might lose. If she sees a potentially profitable situation, she takes it.

Weak poker players are the best example of how a lack of courage can lead to bad gambling. Fearful poker play results in losses that could have been avoided had you the courage to bet and raise with your good hands.

But how on earth does justice apply to a gambler? Think in broader terms. What’s the just or fair way to manage your gambling bankroll?

Wouldn’t it be more just to your family and friends if you only gambled money you didn’t need for the other essentials of life?

Wouldn’t it be unjust to risk the mortgage payment on a game of craps?

Temperance, of course, refers here to moderation and reasonableness. If you can’t gamble moderately, you shouldn’t gamble at all. You can find thousands of horror stories in the rooms of Gamblers Anonymous about how many lives have been ruined by compulsive gambling.

In fact, if you’re unable to gamble moderately, abstinence might be the wisest, most courageous, most just, and most temperate decision you could make.

5- Having a Role Model

One suggestion for aspiring Stoics that I’ve seen is to find a role model to pattern your life and activities after. For a gambler, this might be someone who gambles professionally and successfully.

Blackjack players might use Ken Smith as their role model. If you’re a webmaster publishing a gambling information site, Michael Shackleford might be the appropriate role model.

Those are, of course, gambling-specific role models. But you don’t have to limit yourself.

Many of the Stoic philosophers also make excellent role models, and they can offer you a mental picture of good decisions to make in gambling situations. Marcus Aurelius, of course, is a legendary Stoic role model. Reading Meditations is something every would-be Stoic should do.

James Stockdale is another Stoic worth studying. You might have heard of him because he ran for vice-president as Ross Perot’s running mate. He credits his practice of Stoicism for helping him maintain his honor and dignity as a POW for 7 years.

These types of role models teach lessons that can be applied to gambling even though they’re not directly related.

Much of Stoic thought resembles Zen Buddhism, but the 2 philosophies take different routes to their truths. Zen Buddhism focuses on meditation and clearing of the mind to reach a state of mindfulness. Stoicism encourages rational thinking and contemplation to get at the truth.

Both encourage mindfulness, but it’s mindfulness of a different flavor.

You don’t know if you’ve exercised reason, courage, justice, and temperance in your gambling career unless you pay attention to your behavior. Without mindfulness, it’s impossible to practice Stoic gambling principles.

When I talk about mindfulness in this context, I’m suggesting that you pay attention to what you’re thinking and doing right now. That probably sounds obvious, but it’s less common than you think.

In fact, we live in an age of distraction. If you’re playing poker with headphones on with your favorite music going, you’re not entirely present in the game. You might not hear some of the clues that come from listening to the conversation of the other players.

When you practice being mindful, you start to make decisions and take actions that fit with your philosophy. You improve at being a Stoic. And the goal of being good at Stoicism is to live a good life.

You also should pay attention to your emotions, especially when you’re gambling. Your best decisions come from reason, not emotion. You can’t be more reasonable if you’re not paying attention to what’s causing your behavior.

One of the most important tools in the Stoic toolkit is their daily review. It’s similar to the 10th Step in Alcoholics Anonymous. The idea is to review your day and how you behaved so you’ll know how close you came to living your principles, gambling or otherwise.

Ask yourself questions. You can write down the answers or just think about them.

1- Did you accomplish anything worthwhile today?

2- Was there anything you could have done better? How might a better version of yourself handled a certain situation that came up?

This kind of review before going to sleep at night will train your mind to pay attention to these things throughout the day.

If you want to see an example, read The Meditations of Marcus Aurelius. This is basically a collection of his daily reviews. He might not have been much of a gambler, but he’s an excellent role model for any kind of Stoic.

Stoicism isn’t for every gambler, but if the gambling principles I’ve mentioned in this post resonate with you, great.

You can find more resources on the internet about Stoicism than ever before. It’s been growing as a “mind hack” and entrepreneurial philosophy for several years now.