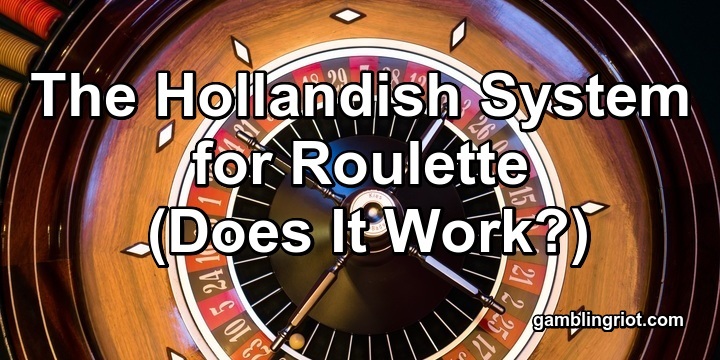 Try the Hollandish System for roulette free. Get a 350% deposit bonus. WildVegasCasino.

The Hollandish System is one of many different roulette betting systems, None of these systems work in the long run, by the way.

But they can work in the short term.

And sometimes they can make playing roulette more fun or more interesting.

My goal with this post is to write the most complete and comprehensive post on the internet about the Hollandish System.

What Is the Hollandish System?

Generally, roulette systems involve raising and lowering your bets based on what happened on the previous spin of the wheel. The goal is to either take advantage of winning or losing streaks. Most roulette systems (including this one) focus on the even-money bets.

The even money bets include red or black, odd or even, or high or low. All these bets pay off at even money. In other words, if you bet $100 on an even money bet and win, you get $200 in winnings.

All these even money bets have something else in common, too. They each have a 47.37% chance of winning. If you see the inequity in that, you probably already realize that it’s impossible to win at roulette in the long run.

How Does the Hollandish System Work?

In most progressive betting systems, you raise or lower your bet after a win or a loss.

But in the Hollandish System, you make 3 bets at a certain betting level before raising your bets.

The betting progression isn’t  as straightforward as doubling the size of your bet, either. (That’s The Martingale System).

The Hollandish System uses any of the following progressions:

As you can see, there’s no real difference between the 2 progressions. They just have a different size starting bet. You could easily choose progression #3, below:

If you think of the bet sizes as “units” instead of dollars, these progressions make more sense.

How to Use the Hollandish System:

You’ll start by making 3 consecutive $10 bets on one of the even money bets above.

If you show a profit after those 3 bets, that’s considered a winning set. You start over at the beginning.

If you show a loss after those 3 bets, that’s considered a losing set. In that case, you move up to the next betting level.

Here Are 2 Examples of Winning Bets:

Here Are 2 Examples of Losing Bets:

You continue to go up a betting level until you have a net win for your session. At that point, you always return to the original starting bet.

Here’s a Longer Example that Might Make More Sense:

Can You Win Money at Roulette Using the Hollandish System?

What you’re really wondering is if the Hollandish System will give you an edge over the game. This it won’t do.

Roulette is a game with a house edge of 5.26%. That’s the mathematical projected estimate of how much of each bet you’ll lose over the long run. The more bets you make, the closer your actual results should come to your expected results.

The reason it has this edge is because the payout odds aren’t the same as the odds of winning. On a standard American roulette wheel, you’ll find 38 numbers. 18 of them are black, 18 are red, and 2 are green. 18 of them are even, 18 are odd, and 2 are 0.

You have the same number of black results and red results. The odds of getting black or red are the same. But you’ll also lose if the ball lands in one of those green pockets.

And each spin of the roulette wheel is an independent event. What happened on the previous spin doesn’t change the probability of what will happen on the next spin. Those pockets are still open for business.

If someone invented a game where a roulette pocket filled in after a ball landed in it, the odds would change after every spin. But that’s now how the game works.

Changing your bet size because of what happened on previous bets doesn’t change the math of the game. The expected loss is going to stay the same, regardless. Countless computer simulations have proved this.

In the short run, sure, you can have fun and win some money using the Hollandish System.

But in the long run, if you keep playing roulette, you’ll eventually lose all your money. That’s just what happens when you play a negative expectation game.

The Pros and Cons of Using the Hollandish System for Roulette

That doesn’t sound like a big deal, but look at the 2 progressions side by side:

Let’s assume hypothetically that you lose 6 bets in a row. This doesn’t happen often, but it’s far from unheard of. In fact, it’s certain to happen occasionally.

That doesn’t mean the Hollandish System is perfect. It just means that it’s a slower, gentler progression than the Margingale System.

The danger with the Hollandish System is that “true believers” will think they’ve increased their odds of being a net winner by using this system.

“Bankroll management” gets a bad rap in the gambling writing niche. I think some writers and some readers misunderstand the concepts, though.

The first rule of bankroll management is that you only gamble with money you can afford to lose. If you haven’t paid the rent, if you need money for an electric bill, or if you’re behind on the child support–you shouldn’t be gambling at all.

The second rule of bankroll management is that if you insist on playing a negative expectation game (like roulette), you’ll lose all your money if you play long enough. The house edge is like compound interest. It’s one of the most powerful forces in the universe.

The other aspects of bankroll management are more controversial. The first is having a loss limit. This is an amount of money you’re willing to lose before you call it a night.

If you sit down at the roulette table with $1000 in chips, you might decide you’re going to quit if you lose $400. That’s called a stop-loss limit.

The second is a win goal. This is the amount of money you hope to win. When you’ve won that amount, you quit playing.

The idea behind a stop loss limit is that you always walk away from the table with some money left in your pocket. Of course, this assumes you don’t make your stop loss limit your entire bankroll. That’s acceptable, too, though–it’s an arbitrary amount.

The idea behind a win goal is that you sometimes will quit while you’re ahead. I have many gambler friends who never walk away from the tables with any winnings. They just keep playing until they lose.

These bankroll management techniques help you enjoy the short-term variance present in all casino games. They don’t increase your chances of winning.

You should use the same bankroll management strategies for roulette using the Hollandish System as you would any other negative expectation game.

Which Other Roulette Systems Resemble the Hollandish System?

Really, any negative progression betting system resembles the Hollandish System. The most notable example is the Martingale System. It’s a sharper progression upward in the size of your bets, but it recoups your losses immediately following a win.

Here are some other negative progression systems:

None of these systems work in the long run.

But they’re all a lot of fun in the short term.

Once you understand the gambler’s fallacy and the nature of the house edge, you’ll realize that systems like the Hollandish System don’t work in the long run. Raising and lowering your bets based on the results of your previous bets doesn’t affect the math behind the game.

A lot of writers are more down on systems like the Hollandish than I am. I get where they’re coming from. Too many gambling novices think that systems like this can beat the house in the long run.

But if you use the Hollandish System with the right attitude–with the understanding that you’ll lose all your money in the long regardless of which betting system you use–then you can use this betting system to have more fun at the table.

You’ll occasionally run into a winning streak that’s so impressive that the other gamblers at the roulette table will want to know your secret. You can tell them that you’re using this system, and that you learned it from Jim Wagner over at Gambling Riot.

Let me know in the comments below.