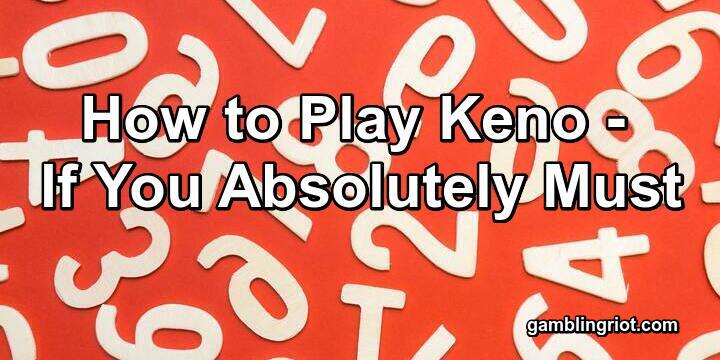 You’ve probably seen keno in the casinos, but maybe you haven’t played yet because you didn’t know how it worked. If that’s you, then this is the post you should be reading.

Keno’s not my favorite game in the casino, but I prefer it to the lottery, which it closely resembles. I think casinos are in the business of gambling. I don’t think state governments should be, and that’s what the state lottery is–a game of keno being run by the state government.

Play keno for free online. Or play for real money and get a 350% deposit bonus. WildVegasCasino.

What is keno, and how does keno work?

If you’ve played the lottery, you probably have a reasonable idea of how keno works. You choose several numbers, the numbers you’ve chosen are displayed on the keno ticket, and if the numbers drawn by the casino running the game match–you win.

The house edge for keno, explained.

Here’s the biggest problem with keno, though:

If you’ve read many of the other posts on this site, you already know what the house edge is. But if not, here’s a quick refresher:

The house edge is a mathematical estimate of how much you’re expected to lose of each bet that you place. It’s expressed as a percentage, and it exists because of the difference between the odds of winning and the payout odds.

The house edge isn’t the only factor in describing how good or bad the math behind a casino game is, by the way. You also need to look at how much you have to spend per bet and how many bets per hour you’re making.

Casinos estimate how much they expect you to lose per hour playing a gambling game via a simple formula:

Keno versus blackjack, for example.

The house edge in a game of keno is 25%. Compare that with the house in blackjack, which is about 1%, and you’d say that keno is an awful game. And maybe it is, but that’s not looking at the whole picture.

When you’re playing blackjack, you’re probably getting in 70 hands per hour. That’s $350 per hour that you’re putting into action.

At most casinos, you’ll probably only get in 6 or so games of keno per hour. Since you’re only playing for $1 per game, you’re only putting $6 per hour into action.

With a 1% house edge at blackjack, you’re expected to lose $3.50 per hour in the above scenario.

Who should play keno in a casino?

Who’s a good candidate for the keno lounge?

Suppose you’ve lost most of your gambling bankroll. But you want to  stay in action and spend some time in the casino. Keno might be your best way to stretch what remains of your bankroll.

Online keno games usually have a lower house edge, but the online game runs fast. It’s more like a slot machine than a true keno game. My suggestion is to stick with slots if you want to hit a big bankroll online.

How to play keno in the casino.

Let’s talk about the nitty gritty of how to play keno:

The first step is to find a casino that offers the game. At many casinos, you can play keno in the keno lounge, but that’s not the only place. You can also play keno in some of the restaurants and even from the casino bar.

Keno runners have the cards, which are numbered from 1 to 80. You just buy the cards from the keno runner, usually for a dollar, although you can pay more if you want to put more money into action.

The casino will have a limit to the number of spots on the keno card you can buy. Usually it’s 10, but it might be as many as 20. Like the lottery, you might even have the opportunity to buy a “quick pick”. That’s when a computer with a random number generator picks your keno spots for you.

There’s no advantage to picking your numbers over letting the game pick for you, either.

Once you’ve picked your numbers, you give your ticket and your money to the keno runner. He gives you back a receipt with your numbers on it. Then you get to watch the keno machines pick numbers. They’re using the same kinds of numbered ping pong balls you’d see in the lottery.

The more numbers you have that match the numbers that were drawn by the keno machine, the more money you win.

The probability and odds of getting specific numbers in keno games.

The odds of each number coming up in a keno game are easy to analyze, too. Since there are 80 numbers, and each one has an equal chance of coming up, the probability of getting any particular number on any particular draw is 1 in 80, or 79 to 1.

Is keno rigged? Do casinos cheat at keno?

Some superstitious types think these games are rigged, but they’re not. For one thing, the casino has no incentive to rig their casino games. The payouts are already set up mathematically so that the casino wins an average of 25% of every dollar you wager on keno.

Why would they need to cheat?

By the same token, there’s no strategy to picking keno numbers that will help you win more often. Hunches don’t matter, either. Let’s face it. You’re not psychic.

If someone did have psychic powers and were able to win at keno, the games wouldn’t exist anymore. The casinos would have gone out of business years ago.

Keno variations and their fancy names.

There are many different variations of keno to choose from, too, with all kinds of interesting names. Michael Shackleford’s Keno Scouting Guide names several of them:

Each of these has subtle variations that distinguish it from other keno games:

Caveman Keno, for example, has animations of dinosaur eggs that hatch, providing bonus payouts for players with the right numbers.

Cleopatra Keno offers players free games if you wind up drawing the last number as one of your choices.

Power Keno quadruples your winnings if the last ball drawn matches one of your numbers.

Super Keno is like Power Keno, but your winnings quadruple if you match the first number drawn (instead of the last one). See, I told you some of these variations were subtle.

Triple Diamond Keno has diamond animations that are hid and give a player the opportunity to triple his wins.

Here’s the thing about progressive jackpots, too:

Once you have a big enough jackpot, you’re playing a positive expectation game. Some players look for these opportunities, but I think it’s so hard to hit a keno jackpot that it’s not worth the trouble to find them.

To be clear, your odds of winning don’t increase the higher the jackpot grows. The payback percentage for the game does.

Some casinos cap the size of their progressive jackpots to avoid this situation, too.

The different kinds of keno bets.

The most common keno bet is called a straight ticket. This is the easiest way to play. You just make a single wager on the numbers you’ve marked.

It has some variations, though. The way ticket is one variation of a straight ticket. You might mark 8 numbers, and then circle 2 groups of 4 numbers. You could then bet on both groups of numbers.

A king ticket is a ticket where one number is considered the “king”, and all the combinations of the numbers on your ticket include that number.

A combination ticket is also common. That’s just a fancy way of saying you have a ticket with several groups of numbers on it. You’re betting on each of those combinations. The more combinations you bet on, the more the ticket costs.

Keno’s a lark with a lousy house edge. There’s no skill to playing casino. You put up your money and cross your fingers. Sometimes you get lucky.

One thing you can do to make sure you’re getting your money’s worth is to enjoy the free cocktails that most casinos serve players in the keno lounge.

Other than that, the only strategy is to do some scouting and find casinos where the keno games offer favorable pay tables. The link to the scouting report earlier in this post includes details about the payback percentages for some of these games.

According to Yelp, there are plenty of places where you should consider trying keno games in Las Vegas.

Ellis Island Hotel, Casino, and Brewery is the highest rated keno in Las Vegas. They also have karaoke and cocktails.

The Buffet at Bellagio is also a highly rated place at which to play keno.

I’d be remiss in my duties as a casino gambling blogger if I didn’t point out that you have better options than keno at the casino.

If you’re looking for a game that doesn’t require any skill and offers a better payback percentage than keno, consider trying the slot machines.

If you like buying cards with numbers on them, consider trying bingo. The payback percentages there are superior, too.

If you don’t mind learning how to play the game with some degree of skill, blackjack is far superior to keno. The house edge, with expert play, is less than 1%.

Craps is another game where no skill is required. It’s the opposite of keno in terms of pace and excitement level. Keno is a stately, almost dull game. Craps, on the other hand, is the most exciting game in the casino.

Keno versus the lottery.

The lottery has sold us a bill of goods. The states which legalized the lottery all claimed that this money would go toward education. If you research the subject, it won’t take you long to realize that in most states. education expenditures did not go up after instituting the lottery. They stayed the same.

In most states, the lottery pays for corporate tax cuts.

If keno’s your cup of tea, go ahead and play it. Don’t pay any attention to the gambling writers who tell you to avoid it because the house edge is too high. As I demonstrated, the hourly cost of playing keno makes  it one of the best bargains in the house.

That being said, keno isn’t the perfect casino games. You have lots of other options in the casino where you have a better chance to win.

So have fun playing keno if that’s your bag.

2 thoughts on “How to Play Keno (If You Absolutely Must)”