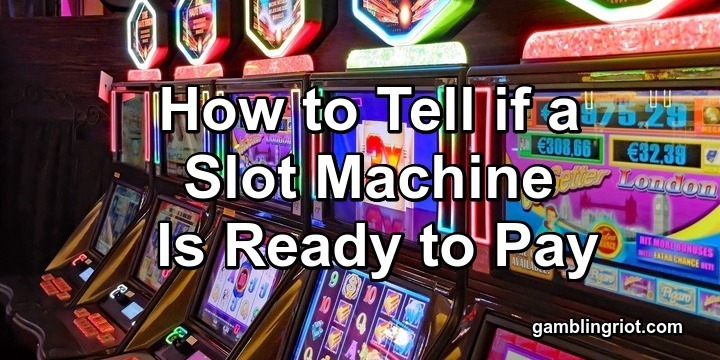 If you knew how to tell when a slot machine was ready to pay out, you would have an incredible superpower. The wealth you could amass from knowing exactly when to bet on which machine would be not just life-changing but world-changing, a windfall so large you’d immediately have an outsized influence on world events.

If your mind could interpret slot machine patterns and guide you toward the game that’s due for a big hit, you’d be the most popular guy on the casino floor. So long as the casinos would allow you to enter and sit in front of a loose slot machine, you’d never need to worry about money.

Of course, all of this is nonsense. That’s not how slot machines work. It’s also not how the human mind works. It’s impossible. You cannot tell when a slot machine is ready to pay. The machine has no memory, no knowledge of what’s going on around it, no sense of who is playing it or how that person has performed in the past.

You can’t tell if a slot machine is ready to pay – and that’s a very good thing. The randomness built into the games is the reason they’re profitable. Because the games are profitable, they’re easy to access, and we slot players have a lot of choice in terms of which machines to pick. If slot games were predictable, no casino operator would host them, and we’d be stuck playing online slots or pretend-money games on our phones.

The natural up and down swings of luck are mostly responsible for the various casino gambling myths that have popped up over the years.

It’s hard for people to accept that numbers in roulette can easily win back-to-back within the confines of normal operation – but it happens about twice a day at a typical Vegas roulette wheel. You’re likely to see several back-to-back dealer blackjacks in a typical session, but it still confounds blackjack players when it happens.

Slot machines produce wildly inconsistent results when you look at their outcomes over a short period. A single pull on a slot machine doesn’t tell you much about the game’s relative likelihood of paying out – neither does a ten-pull session or even a few hours playing the same machine. These games are designed to produce random results at a mathematical scale that’s difficult for us to comprehend.

No wonder people have completely insane ideas about slot machines being due to win, or hot and cold.

When Are Slot Machines Ready to Pay?

A slot machine is ready to pay when the conditions for payout have been met. These conditions are programmed into the game and are based on the game’s paytable and the slot machine designer’s choices. Except for in the case of very few slots with a skill element, player results are totally random. Players have no input on the game’s readiness to pay or anything like that.

A slot machine is not necessarily ready to pay after it produces a string of losing results. It’s also not necessarily cold, or not ready to pay, just because a large payout has recently occurred. A slot machine’s random results take place within a predetermined range of possible outcomes, all of which are factored into the game’s design and reflected by its statistics, including win percentage and return to player.

It comes down to a simple rule of thumb – you can’t tell when a slot machine is ready to pay, and neither can anybody else.

Slot reviewers and gambling writers talk about gambling in terms of one-hour chunks, not because games are somehow designed around a one-hour playing time, but because it’s the smallest unit of meaningful time we have a word for. Sitting at a slot for an hour and recording your results won’t give you a realistic sense of its hit frequency or return to player percentage. It would require many hundreds of thousands of hours of tracking to come up with a number anything like a game’s real-world odds.

Slot Machine Wins are Based on Random, Independent Events

What makes a slot machine result a random event? The design of the game. Modern slots used something called a pseudo-random number generator to produce endless numbers of random results. By pressing the “spin” button on the face of the slot, you’re capturing a random set of these numbers, which is tied to a specific outcome in the game’s programming.

What makes a slot machine result an independent event? In probability terms, an event is independent if it occurs regardless of any previous results. When you flip a coin, it doesn’t matter what outcome just occurred, the odds of heads or tails occurring on each flip are 50%. That’s an independent event. A slot player’s outcome has nothing to do with previous outcomes – it relies instead on those captured strings of randomly generated numbers.

A slot machine isn’t due to pay out any more than it is due to take your money. A machine can’t be hot or cold, since each outcome is random and independent. Previous results have no predictive value, so tracking your performance in this way is meaningless. It’s much more meaningful to attempt to determine a machine’s RTP or hit frequency, though that isn’t always possible either.

These strings of wins and losses only seem like streaks to use due to the natural variance built into the game and the human mind’s predilection for looking for (and finding) patterns.

For example, if a slot machine is programmed with a hit frequency of 33%, you might expect to win on one out of every three spins. You’re not very likely to see that exact outcome until you’ve played hundreds of thousands of spins. Variance means the fewer results you see, the less likely your results will look like the theoretical results posted by the game’s manufacturer.

The Impact of Variance on Slot Machine Play

I’ve had slot machine-playing buddies insist that I leave a machine when I don’t win within the first five spins. This is ridiculous advice, and it uncovers a total misunderstanding of how slot machines work.

Here’s why I don’t quit after a few losing spins in a row – I have no idea what my future results will be based on a couple of contemporary results. Some slot machines are set to pay out relatively few large payouts to hit their programmed RTP figures. Other games payout relatively frequent but small wins. Regardless of how they get there, all slots in US casinos are required to perform to a certain standard.

When you bail out after just a few bad pulls, you’re literally handing the casino a huge win, because you’re most likely missing out on the few small wins (or one larger one) that would return your performance to the machine’s average.

If you think about it, you’re creating a losing streak by bailing out before you have a chance to see some wins that push you back toward average performance.

Slots players stand to gain a much bigger advantage by researching slot payout percentages by denomination in a given gambling jurisdiction, or by choosing games based on features like bonus rounds or licensed themes.

Slot machines aren’t rigged to rip off customers – they’re designed around a mathematical principle that guarantees a profit over time while keeping players interested thanks to small cash prizes. Rather than attempt to predict a win or a loss, you should focus on finding and playing the slot games you enjoy, the ones that give you the most entertainment value.