So. You want to know how to win a million dollars.

The thing to remember about trying to win a million dollars online or even on Wheel of Fortune is that it’s never guaranteed. Big rewards come with big risks and long odds.

But it IS possible.

How to Win a Million Dollars Online

When I searched Google for “how to win a million dollars online,” I got back lots of results about how to become a millionaire. All involved starting your own business on the internet.

Becoming an entrepreneur is arguably a more “legit” way to become a millionaire. But how-to articles about becoming an internet entrepreneur wasn’t quite what I was looking for. This is a problem with how Google generates results these days, but I’ll save that rant for another day.

When I try the same search on Bing, I get articles about gambling online, which is more what I was looking for. It’s an interesting contrast in the search results.

If you want to win a million dollars online, probably the easiest way is to live in a state where you can buy lottery tickets online. Then you have to win the lottery. I think you already know that’s a long shot.

No lottery? You can always try the PCH Sweepstakes. I knew a guy who won that 20 years ago.

But I’ll have more to say about that later in the post.

You can also win a million dollars online by betting on sports or by playing progressive slot machines on the internet. I’ll have more to say about both those subjects later in this post, too.

How to Win a Million Dollars on Wheel of Fortune?

Another option is to get on Wheel of Fortune. This kind of large jackpot wasn’t always available, and it’s only within the last couple of years that anyone has won a million playing Wheel of Fortune. The million dollar wedge on the wheel, though, has been there since 2008.

And it’s not enough to just get lucky and have the wheel land on the million dollar wedge. You not only have to get it to land there twice, but you also have to solve both puzzles.

Here’s a step-by-step guide to winning a million dollars on Wheel of Fortune:

Without accounting for the odds of failing to solve the puzzle, the odds of winning a million dollars on Wheel of Fortune are close to 2000 to 1. That’s still not bad compared to other methods.

Has Anyone Won a Million Dollars on Wheel of Fortune?

Even though it’s a huge longshot, people HAVE won a million dollars on Wheel of Fortune.

Here’s a list of people who have won that much money playing Wheel of Fortune:

If so, please let me know in the comments. 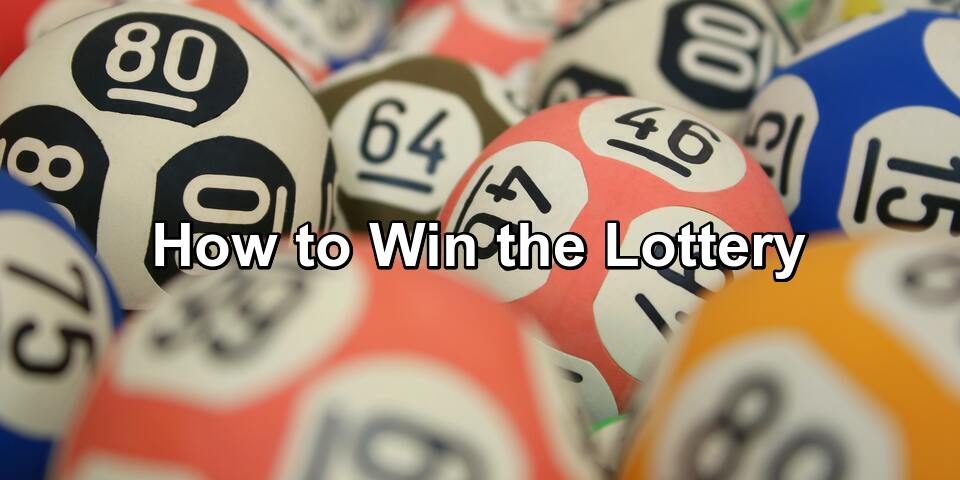 How to Win a Million Dollars Playing Mega Millions or Powerball

Winning the lottery might be the first thing you think of when brainstorming ways to win a million dollars. When I was growing up, that’s the ONLY way I’d ever heard of.

Different states have their own draw games, and these often hit $1 million.

But the big multi-state games always offer well over a million dollars. Those games are Powerball and Mega Millions. Both have starting jackpots of $20 million.

And tickets for these games cost $2 for the basic game, but you also have the option to place another $1 bet to activate the “Megaplier” in Mega Millions. This increases the potential jackpot, but it also means spending $3 on a ticket.

Richard Lustig is one of the worst purveyors of this kind of nonsense. Please don’t waste your money on such.

The Best Ways to Win the Lottery

He suggests in his strategy for winning a million dollars to take a spin on a Megabucks slot machine once a day. If you don’t want to go to the casino once a day for this, you could go once a week and make 7 spins.

You could translate this into one of the best ways to win the lottery easily enough.

Set a budget for how much you want to spend on lottery tickets, and then buy that many tickets during the weekly drawing. If you’re playing a lottery that has 2 drawings a week, just split that budget in two.

For example, the Texas Lottery only costs $1 to play, and they have 2 drawings a week. Let’s say you’re willing to risk $20 a week on lottery tickets.

Of course, this means you’re buying $1000+ in lottery tickets a year, but that might be worth it for you.

I don’t suggest spending more than 1% of your annual income on gambling, though. Anything more is just a foolish waste of money.

How to Win a Million Dollars on Progressive Slots Like Megabucks

This site has a detailed post explaining everything you might ever want to know about Megabuck slots from IGT. In many ways, it’s a slot machine that’s not much different from one of the big lottery games.

Like MegaMillions and Powerball, Megabucks is a progressive jackpot game. The word “progressive,” in this context, means that it progressively gets larger until someone wins.

Also, Megabucks is a dinosaur of a game. IGT launched the game in 1986 as the first WAP (wide-area progressive) slot machine in the world. A “wide-area progressive” jackpot is one in which machines over a large geographical area feed the size of the jackpot.

It costs $3 per spin to play Megabucks, and the biggest difference between this slot machine game and a lottery drawing is the rate of play. It’s relatively easy to make 500-700 spins on a slot machine game in an hour. That’s an outlay of between $1500 and $2100 in wagers.

Also, depending on which lottery game you play, your probability of winning a jackpot is often at least twice as good as that, even if the jackpot is smaller. (See the article from Michael Bluejay that I linked to earlier in this post.) 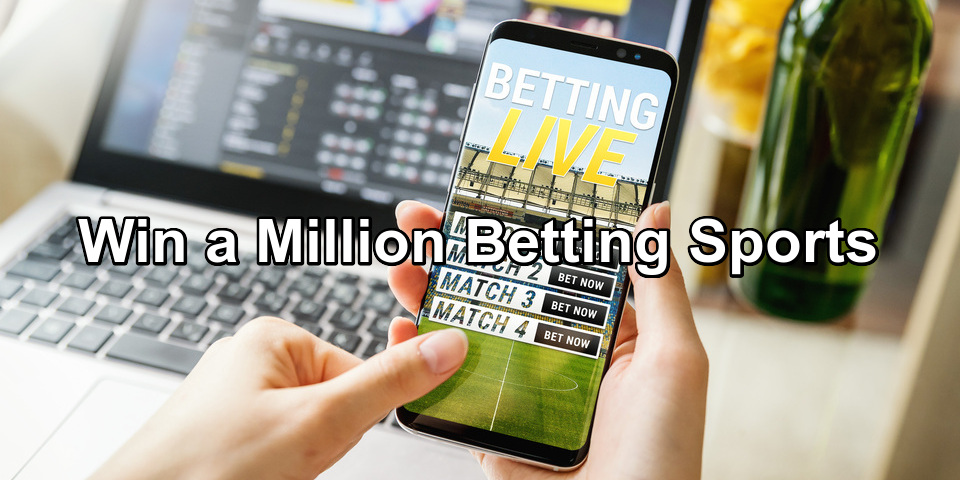 How to Win a Million Dollars Betting on Sports

Betting on sports is one of the few ways where a gambler can gamble with a mathematical edge. Most sports bettors have a different strategy than getting lucky and hitting a big one-time jackpot, though. They try to stay in action with bets that are a low percentage of their bankroll so they can make money consistently from their sports betting activities over time.

Also, let’s be honest — most (maybe all) sportsbooks are going to turn down a $1.1 million bet that pays off at $1,000,000. Even sportsbooks that cater to whales limit the size of their sports wagers.

Besides, most people reading blog posts about how to win a million dollars don’t have $1.1 million to risk.

Legit advantage gamblers in the sportsbetting game risk 1% of their bankroll per bet. This means that if you want to bet $10 per event, you need a bankroll of $1000.

It might seem impossible to achieve $1 million in winnings at that rate, but keep in mind a couple of things:

Winning a million dollars in sports betting is also something you can do overnight, but that means placing parlay bets. You can find detailed parlay betting strategy advice here.

Check out this interview with Billy Walters — he’s one of the most successful sports bettors in the history of gambling.

Winning a Million Playing Texas Hold’em or Other Poker Games

But you can also go for the big jackpot overnight by playing in big tournaments. The most notable of these is the World Series of Poker, although you CAN find other poker tournaments with a top prize of $1 million or more.

My favorite guide to the World Series of Poker can be found at Beat the Fish. It’s one of the rare gambling information sites run by an individual — and an individual who knows what he’s talking about.

The trick with the World Series of Poker and other big poker tournaments is being skilled enough to achieve a positive ROI. The other trick is having a big enough poker bankroll to handle the swings — even the best poker player in the tournament is likely to lose.

Profiting from big poker tournaments doesn’t just to have to involve winning, either. Steve Badger has a great article on his site about getting sponsored to play in the World Series of Poker. If you’re interested in that, you should read his page and pay attention to what it takes to pull this off.

The Easiest and Fastest Way to a Million Dollars

The easiest and fastest way to win a million dollars is to play the lottery. The only flaw with this strategy is that the odds of winning are so low. And the expected return for lottery games is so low that in the long run it’s a losing proposition.

Basically, you should spend money on lottery tickets the same way you might “invest” in Bitcoin. Don’t risk a lot of money. If you’re putting more then 1% of your income into any kind of gambling, you’re doing it wrong.

Other ways of winning a million dollars have similarly low odds.

If I were on a quest to make a million dollars, I’d open some kind of online business. Another option might be to play poker or learn how to win at sports betting. The odds are way better, but the time frame is different.

It’s not easy to win a million dollars playing poker, and it’s not fast, either.

But, the probability of success is much greater if you’re willing to do the work.

What to Do if You Win a Million Dollars

If you do win a million dollars, your headaches are just beginning. It would be unrealistic to say that your life won’t improve, but you should still be smart about your new riches and try to make sensible decisions.

I’m the type that would want to share the good news with family and friends. I think that’s a mistake, though. Keep your mouth shut. You might tell your AA sponsor, your priest, or your therapist.

The truth is that when people know you’ve won a million dollars, they’re going to assume that you have infinite funds, so why shouldn’t you help them out.

The problem is — and this is from firsthand experience, by the way — “loans” and gifts of $1000 add up faster than you think. One of the reasons I’m not longer rich after making a million dollars is because of the death of a thousand cuts by helping out so many friends.

My other suggestions probably seem obvious. Find an attorney and a financial advisor that you trust. Their fees will be worth it.

Pay your taxes right away. Don’t delay this. Depending on how you win your million dollars, that might be taken care of you at the time you win, but if not — take care of it immediately.

Also, pay off your debts. There’s no point in paying outrageous interest rates on debt when you have the money to pay it off. Debt can also be part of the death of a thousand cuts I mentioned earlier.

The answer to the question how to win $1,000,000 is “any way you want.” I’ve listed multiple routes to that destination, but it’s up to you which routes you want to take.