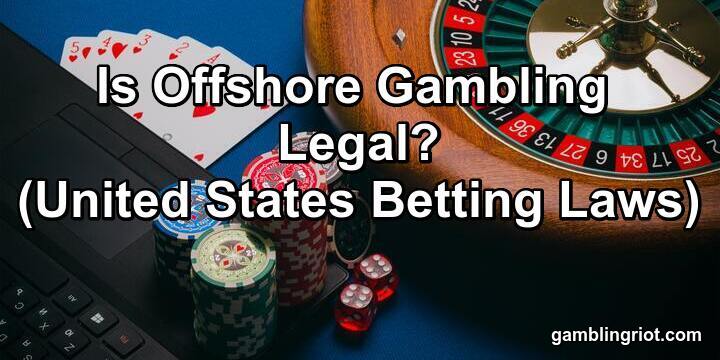 Gambling law in the United States has undergone a transformation in the first two decades of the second millennium. This has a big effect on the answer to the question, is offshore gambling legal.

A timeline of American gaming law would be quite crowded starting in the early 90s.

The question of legal gambling in America is riddled with difficulties. Not only do bettors have to contend with multiple layers of regulations – federal law, state law, local laws, not to mention several layers of federal and state gaming regulations – but in many cases the law hasn’t caught up with the industry.

This is particularly true when it comes to bets placed online. Offshore betting sites existed in a legal gray area for many years, as few state or federal laws existed to control the behavior of gamblers based in America but sending and receiving gambling cash to a client outside US borders.

To understand the legality of offshore betting, you need to understand about 30 years of gambling law changes in America.

The modern offshore gaming question begins with the introduction of PASPA – the Professional and Amateur Sports Protection Act. Passed in 1992, this law banned any American government (local, state, etc.) from legalizing bets on sports at any level. This put an immediate end to the few American sports betting options that existed outside of Nevada.

Justification for PASPA was mostly emotional, with testimony from athletes and sports figures about how sports betting would negatively affect “the character of team sports,” emphasizing that both pro and amateur sports in America are about “clean, healthy competition,” and not “the fast buck.”

After PASPA, only bettors living in Nevada, Delaware, and Oregon had access to legal sports bets, and in the case of Delaware and Oregon, this action was limited to a few parlay ticket options, none of which ever caught on. PASPA did what it was designed to do – kill an industry that was barely getting off the ground.

The next major legal innovation that affects offshore betting to this day is the 2006 UIGEA bill. The Unlawful Internet Gambling Enforcement Act has a really tough-sounding name, but all it really does is restrict the way banks and credit card companies can do business with known offshore casinos. How did it pass? It was slipped into a can’t-lose set of anti-terror regulations.

The UIGEA locked US players out of the majority of online casinos and sportsbooks. The effects were more serious than a few “404” pages on laptop screens – the bill led directly to 2011’s infamous Black Friday. That was a government action against the four biggest poker sites in April of 2011. These sites and many of their operators were found to be in violation of the UIGEA and also accused of bank fraud, money laundering, illegal gambling, and other serious federal charges.

The past few years have seen luck change for American bettors. Though offshore gambling is still very much in peril, gamblers are gaining new options along the way. The government of New Jersey took the United States to court several times between 2009 and 2018, seeking permission to provide regulated sports and casino bets in spite of the government’s existing PASPA regulations. Ultimately, New Jersey was successful, with the US Supreme Court deciding to strike down the 26-year-old law. The Court’s majority opinion found that the Constitution doesn’t give Congress the right to intervene in the gaming laws set by state governments.

This led to an explosion in new betting options – state-sponsored casino gambling, state-sponsored sports betting, and a whole new industry in the form of daily fantasy betting. While some states have already acted to outlaw these new forms of legal betting (Texas is particularly nervous about daily fantasy and other accessible betting options for its citizens), others are embracing DFS and state-regulated sports and casino bets.

Laws that Apply to Offshore Gambling in America

Now that PASPA is off the table, what restrictions stand between Americans who want to play Bitcoin roulette, participate in a Texas hold ‘em tournament, or bet on a few Olympics events with offshore casinos and sportsbooks?

Understand that federal law makes it a crime for people to participate in “illegal gambling.” That means you, the gambler, are at risk for legal intervention, not just the provider of the illegal game. At the federal level, the biggest impediments to legal offshore gaming are:

I want to say this clearly – offshore gambling, the placing of any wager on any game of chance or skill through a provider located outside of the United States, is illegal.

At the same time, I’d like to point out that it’s technically illegal to drive over the speed limit or use the regular price while weighing organic fruit. My point is that people do things that are illegal all the time in the name of convenience or saving a few bucks.

A better question than “Is it legal to gamble at offshore sites?” would be “Will anything bad happen to me if I get caught placing an offshore bet?”

The answer to that question is a resounding “No.”

The US government hasn’t ever acted against gamblers in any meaningful way using the Wire Act, UIGEA, PASPA, or any other such law. While you will eventually be ticketed for parking in a handicapped spot or driving 55 in a 30-mph zone, the likelihood of a bettor ever being penalized for placing a wager at an offshore casino or sportsbook is as close to 0 as it gets.

What are the downsides of placing offshore bets? You won’t get arrested, you won’t have a cop at your door in the middle of the night, and you won’t be penalized for it. However, if you have a financial dispute with an offshore casino, you won’t have any legal recourse. Since playing blackjack through an offshore gambling website isn’t a legal activity, you can’t for example sue the provider in court for issues with your withdrawals or deposits.

While offshore gaming isn’t technically legal, bettors like you and me don’t face any threat of legal action against us when we play our favorite offshore games of chance and skill. It’s the providers of those games that are in legal jeopardy. While downsides to playing at offshore casinos and sportsbooks exist, for many Americans these bets are the only ones they have access to.

Be smart when choosing an offshore casino or sportsbook website, do your homework, read reviews, and use the experience for entertainment. Don’t be afraid that you’re committing a crime – focus instead on finding a legit operation that won’t try to rip you off.