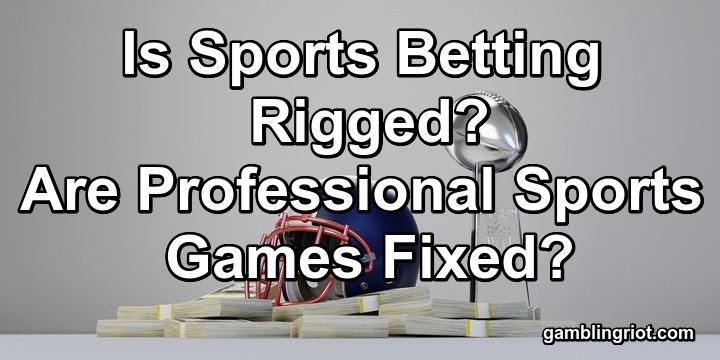 You’ll have many opposing views depending on who you ask and when you ask them. You’ll hear sports bettors in casinos across the country crying foul on any given day.

The sport seems inconsequential, and disillusioned fans claim games are rigged as it suits their narrative.

But most of the wailing you hear in the sportsbook or local bar are cries of a loser.

But if the system were really rigged, the sports betting complex would crumble. The notion that professional sports could be fixed seems unthinkable, but we’ve had scandals that prove anything is possible in recent years.

Also, if YOU could rig sports betting (and you can’t), that would be one of the easiest ways to win a million dollars ever.

Why do so many gamblers believe sports betting is rigged?

It’s because they don’t understand how sports betting works.

First, you have the vig to contend with on every wager. Sportsbooks charge a vig for every losing bet, so gamblers lose more than they win by only being right half the time.

To earn a profit in sports betting, you need to win almost 53% of the time. That will wipe out your losses, cover the vig, and leave you with a profit.

Many amateur sports bettors fail to recognize this until it begins to bite them.

Then you have the brilliant handicappers working to make the lines challenging to overcome. The sportsbook employees behind the scenes are masterful in how they craft the lines to draw in action on both sides.

It can seem like the sportsbooks never get it wrong, which gives the impression that the entire system is rigged.

There are solid arguments on both sides of whether professional sports are fixed. The past scandals that rocked the sports world are well-documented.

The last major blow to the integrity of professional sports came in 2007 when NBA official Tim Donaghy used his inside track to bet on games and provide information to organized crime syndicates.

Is it possible that an MLB squad could get together and shave runs like the 1919 Chicago White Sox?

The Black Sox scandal is one of the most notable cases of a fix in sports history. But the punishment for the players who threw the World Series included a lifetime ban from baseball.

In today’s climate, the risk doesn’t match any potential reward. The players across professional sports make too much money to tarnish their livelihoods.

I can’t conclude that they aren’t entirely legitimate until concrete evidence shows that professional sports games are fixed.

Above, I talked some about the Black Sox scandal that nearly destroyed public trust in America’s pastime and how a rogue NBA referee used his position to influence games. These cases brought the far-reaching influence of organized crime to center stage.

The problem many have is that they are hardly isolated incidents. Major sports around the globe have had nefarious activity tied to them.

Boxing is one of the most prolific sports on the planet. At the height of boxing’s popularity, it overshadowed what we consider to be the big four in the United States.

For most of the 20th century, the sport was thought to be steered by the Mafia. Making the claims of fixed fights, cheating, and bribes even more plausible.

Horse racing is another sport where we have clear-cut examples of fixed races. However, today’s horse racing climate is more prone to cheating than throwing races.

That’s true across sports and is made evident by cases like the New England Patriots and Houston Astros. The fact is that there’s more money to be made from winning than losing.

Gone are the days when professional athletes were working part-time jobs in the off-season to keep the bills paid.

One of the most straightforward ways of getting to the bottom of anything is to follow the money. In professional sports, that’s as easy as looking at the salaries.

Professional athletes are making millions per year. You can’t find any logical explanation why any of these elite athletes would risk their fortunes to fix games.

When they finally slipped, the league would strip their ability to earn at such an incredible level from them, and they’d get booted from the game they love. The same is true for the coaches who spend years ascending the ranks to call the shots finally.

Losing goes against every fiber of their being, which is how they got to their position in the first place. I doubt any top professionals will throw that away to snake a couple million from the sportsbook.

You shouldn’t forget the role that ego plays in the minds of owners, players, and coaches. Being ousted from the game over fixing games would mark you a pariah. Many people in professional sports wouldn’t dare risk their beloved statue.

The Leagues Take Exhaustive Measures to Maintain Integrity and Trust

The professional sports leagues go to extensive lengths to maintain the integrity of the game. You’re probably familiar with the lifetime ban on baseball levied on Pete Rose for betting on games.

There’s never been any evidence that Rose was fixing games; he bet on his team most of the time. Still, the all-time hits leader has gotten blacklisted.

The same stringent safeguards get put on officials. NFL referees undergo background checks that rival the high-security clearance jobs with the U.S. government.

Even mid-tier NCAA basketball referees are prohibited from making sports bets and notify the governing body before visiting any casino.

The juice isn’t worth the squeeze for professional referees to risk their careers by getting involved with fixing games. Not to mention it’s a felony, which adds a whole new level of nope.

Bad Calls Are a Part of Sports

If you’ve ever seen a referee blow a call at a crucial point of the game and launch the television remote, a drink, or your phone across the room, you’re not alone.

Bad calls seem to come at the most inopportune times and can make it appear as though the officials or the league as a whole is out to get your team. But the truth is that officials are human and, as such, are prone to errors.

It’s a rare occasion when a single call holds enough wait to change the outcome of a game. If the officials were out to make something happen, people without a rooting interest would notice. Yet, 99.9% of all cries of a referee fix come from the losing team’s fans.

One of the most significant advantages of point shavers and game fixers was the lack of social media and smartphones. It is proven over and over those cheats and crooks are notoriously poor when it comes to keeping secrets.

So, the idea that there’s a widespread conspiracy to fix professional sports games and defraud the public is ludicrous. It would be too large a scale of an operation for somebody not to slip up and spill the beans.

By now, there’d be a jilted lover or comforting bartender that came forward and blew the lid off the entire operation.

Sharp Bettors Are the Proof in the Pudding

Sharp sports bettors win, and they win consistently. It’s a tall order, but they prevail despite the odds against them.

The margins to be a profitable sports bettor are minute, and the gamblers have to put vast amounts of cash in play to see significant returns. If the system were rigged, it would make it all but impossible for the sharp bettors to win millions annually in the sportsbooks.

No, the conspiracy would reach too far, and the gaming commissions would have caught wind of the discrepancies long before now. The truth of the matter is that sports betting is so tricky it’s easy to make that leap.

Probably not, but you can’t be 100% sure 100% of the time. History has shown that the unthinkable is a possibility.

Furthermore, greed is every bit as alive and healthy today as it was ten, twenty, or one hundred years ago. So, at some point, you have to understand that people are fallible and prone to making the wrong choice when it’s a matter of black and white.

When you consider the gravity of sports betting being rigged or professional sports games being fixed, it becomes evident how much sports are intertwined with our daily lives.

Sports provide a much-needed break from the daily grind and bring us together in ways that other forms of entertainment only dream about at night. It would be a tragedy for the man behind the curtain to reveal that it’s all a lie.

Also, if you’re looking for a bookie, you can find a guide to finding a local bookie right here on this site. I also offer a list of the best offshore betting sites.