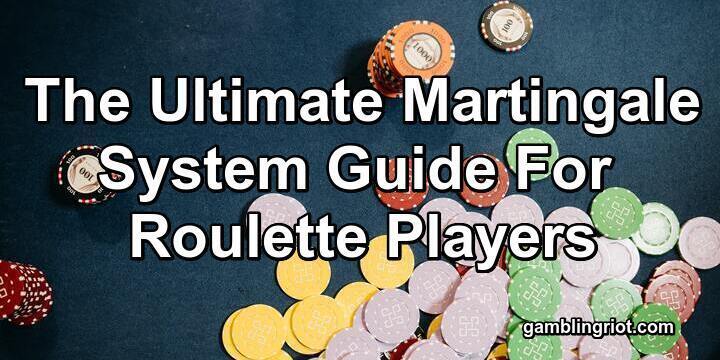 If you’re a roulette player who’s read about The Martingale System before, you probably know that this roulette betting system (nor any other) can change the house edge. But, as Michael Bluejay points out on VegasClick, the goal of the Martingale System isn’t necessarily to make you a long-term winner.

The goal is to increase your probability of walking away a winner during a short gambling session or a quick weekend in Las Vegas.

If you’re a roulette player who’s new to the concepts behind The Martingale System, this post explains in detail how the system works and what it’s good for.

My goal in writing this post is to provide the most readable, complete, and useful guide to The Martingale System for roulette players on the internet. If I dropped the ball somewhere in this post, let me know in the comments. I’ll revise this post accordingly.

Try the Martingale System for yourself online for free or real money. You can even get a 350% deposit bonus on your first deposit. WildVegasCasino.

What Is The Martingale System and How Does It Work?

The Martingale System is a betting system where you raise the size of your bets when you lose. It’s used in gambling games with even-money payouts. Most of the people I know who use this system use it in roulette, where you have 3 different even-money bets available:

You start by placing a low-sized bet that you’re comfortable with. For example, you might start with a $10 bet on red. If you win, you quit or bet $10 on red again. (You could switch to black if you wanted to, or any other even-money bet. The system doesn’t care which even-money bet you make.)

This progression can continue as long as you need it to, as long as you’re able to cover the size of the next bet. In fact, the word “progression” is important, because The Martingale System is an example of a progressive betting system.

It sounds foolproof, doesn’t it?

At least as long as you can multiply by 2.

Here’s a list of what your bets would look like in The Martingale System if you lost a bunch of bets in a row:

Notice how big your bet becomes if you lose 9 times in a row with this system?

That’s the reason this system can’t guarantee that you’ll be a long-term winner.

Here’s the Biggest Drawback to The Martingale System

You will inevitably hit a long, large losing streak that will make it impossible to continue your progression. You face 2 problems with the size of the bets. You’ll eventually need to place a bet you can’t make, for one of the following reasons:

Even if you started with $4000, if you lost 8 times in a row, you wouldn’t be able to place the $2560 bet on the 9th spin, because the casino doesn’t take a bet that large on the roulette table.

You’d be justified in thinking that losing streaks that last 7 or 8 spins in a row don’t happen often. In fact, a losing streak that long is unusual.

But it does happen, and it happens more often than you think.

When it does happen, you’ll have a huge losing session.

And, in fact, that’s what the standard gambling writers are complaining about when they say The Martingale System doesn’t work. In the long run, it doesn’t work. You’ll inevitably hit a losing streak that wipes out all your previous winning sessions.

Does This Make The Martingale System Useless for Roulette Players?

This does NOT make The Martingale System useless for roulette players. It just means that you can’t count on making a profit every time you play roulette. You can, in fact, expect to make a profit in most of your sessions, provided you have a reasonable-sized bankroll.

But in some of your sessions, you’ll have a big loss. According to Michael Bluejay, who I referenced earlier, the probability of having a winning session for an hour is 86%. But the size of that profit is small–a little over 13 bets, or about $132.

Over 100 sessions starting with a $10 bet, what does this translate to as an average loss per session and per spin?

Since we know the house edge for the game of roulette is 5.26%, that’s right in line with what you should expect. The house edge hasn’t changed, and if you play enough sessions, your actual results will resemble the expected results.

Can You Use The Martingale System with Other Casino Games?

That’s because the variance when playing slots is large. Also, most slot machines have small ranges between the minimum bet and the maximum bet. You’d have to switch to higher denomination machines on a relatively constant basis to keep up with the changing bet sizes.

The Martingale System CAN be appropriate to use with other casino games which have even money payout bets. Here’s a list of games that are most appropriate for Martingale players:

Blackjack is an okay choice for The Martingale System. The house edge for blackjack is tiny, but the variance is somewhat higher. It also has the same problem that baccarat has–a lot of bets per hour. If you know basic strategy well, it might be worth trying. But you’ll get into the long run much faster in blackjack.

Craps is a good choice for The Martingale System. But you want to stay away from the odds bet and stick with the pass/don’t pass bet. Putting more money into action on the pass bet just puts more of your money into action, increasing the size of your next bet even faster when you hit a losing streak. If you can avoid the odds bet, craps is just as good (or even better) for Martingale players than roulette

Of course, it probably also goes without saying that European roulette is far superior too American roulette for Martingale players. You can measure this by looking at the probability of winning a single even-money bet at each game.

On an American roulette wheel, you have 38 numbers. All of the even money bets are bets on 18 of those numbers, so the probability of winning any of those bets is the same–18/38. That’s 47.37%.

If you want to try The Martingale System, here are some tips and tricks that can save you a lot of heartache:

This isn’t a hard system, and it doesn’t require anything from you in terms of skill. Just stick with the above tips, and you’ll be fine.

The implications of this are probably clear. You wait until you have a win, and then you’re “using the casino’s money” to continue betting. Your losses are limited to small losses.

This does not change the house edge for roulette at all. It also gives you the opportunity to have the occasional really big winning session. But the rest of the time, you’ll have small losing sessions.

I haven’t double-checked the math on it, and I haven’t asked an expert, but it seems like you’d wind up with the same kinds of probabilities you’d have with The Martingale, only in reverse. You’d have lots of losing sessions, but you’d only lose relatively small amounts of money during. You’d also have the occasional big winning session.

I’ve used The Martingale System personally and had a lot of fun with it, but I’ve never used The Paroli System. So I have no practical results to share with you.

6 thoughts on “The Ultimate Martingale System Guide (For Roulette Players)”