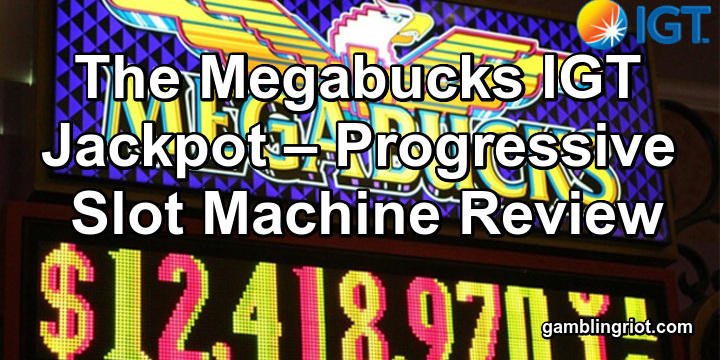 The Megabucks IGT jackpot was the first WAP (wide-area progressive) jackpot game in the world. They launched this series of games in 1986, and since then, dozens of people have won enough money to change their lives.

The Megabucks IGT jackpot resets to $10 million immediately after being won. You can view the most recent size of the jackpot by visiting their online jackpot ticker here.

Not all Megabucks slot machine games are the same game, but they all carry the “Megabucks” branding on the machine, along with the now-recognizable logo on the face of the machine.

Megabuck isn’t available online, but WildVegasCasino has 100s of slots game to choose from. You can play for free or get a 350% deposit bonus when you play for real money. WildVegasCasino.

Where Can You Play Megabucks IGT Slot Machines

Most people who want to play Megabucks IGT slot machines find them in Las Vegas, which used to be the only place offering the game. Now, the games are available throughout the state of Nevada, and that’s not all.

You can find smaller versions with the same Megabucks branding in other states and even other countries. In fact, you’ll find Megabucks machines in almost every casino in Macau.

I mentioned in the introduction that Megabucks was the first wide-area progressive jackpot in history, but I didn’t explain what that phrase meant.

The first concept to understand is that of a progressive jackpot. Such a jackpot is one that grows over time as players put money into the machine. A progressive jackpot takes a tiny percentage of each bet to “fuel” that jackpot.

The second concept to understand is how many machines share such a jackpot. Some games are standalone progressives, which means that the game only has its own jackpot. Others are local-area networked machines, which are machines within a single casino or even an area of the casino which shares the same jackpot.

A wide-area progressive jackpot has hundreds or thousands of machines sharing a jackpot across a wide geographical area.

This is the kind of jackpot Megabucks is, and it’s also why the jackpot is able to grow so large.

How to Play a Megabucks IGT Jackpot Game

Megabucks slots, as far as I know, are only available in land-based casinos. I don’t know of any online casinos offering games that participate in the jackpot. If I’m wrong about that, please correct me in the comments.

I recommend playing Megabucks in Nevada, which has the biggest jackpots.

Playing isn’t hard. You insert money into the machine, which awards you with credits. You decide how many pay-lines and how many credits to wager per line. Then you push the spin button or pull the lever on the side of the slot machine.

Most Megabucks games are just standard 3-reel slots with a single pay-line, which makes it even easier to play than that. You can find 5-reel versions, but they’re less common.

As far as I know, the big Megabucks jackpot games require you to wager 3 coins per spin, and they’re all $1 machines, so you’re looking at $3 per spin.

The main version of Megabucks is almost boring in its simplicity. Your goal is to get 3 matching symbols to line up across a single pay-line on the machine. The symbols are bars, fruit, and 7s.

The big, important symbol, though, is the Megabucks symbol.

To win the progressive jackpot, you want to line up 3 of these in a row.

There’s no skill to that, though — you’ll just have to get lucky.

To win the jackpot, you must make the maximum wager of $3. Don’t ever play Megabucks for just 1 or 2 coins; always bet 3 coins.

The Megabucks jackpot always starts at $10 million and grows from there, so you’re always looking at a life-changing jackpot.

How big can the jackpot get?

Jackpots of $20 million or more are relatively common throughout the history of the game.

What are the odds of winning?

The odds of winning the Megabucks jackpot are terrible by any standard — about 50 million to 1.

Apparently, the odds of getting a Megabucks symbol on each reel on the pay-line are 367 to 1, so you can do the multiplication to see how I came up with that 50 million to 1 number.

Does the Megabucks Jackpot Ever Offer a +EV Situation?

When you’re dealing with a bet where you know what the odds of winning are, you can calculate how good a bet it is.

That’s measured by the expected value of the bet, or EV.

Most casino bets, especially slots bets, are negative EV, or -EV. You expect to lose a certain amount on average over time when making that bet. This phenomenon is what makes professional roulette play impossible.

But when the jackpot for a game gets high enough, the expected value for the bet becomes profitable. This is what makes card counting in blackjack profitable. It’s also what makes professional poker play possible.

Here’s an example of how that works:

With Megabucks, when the jackpot gets over $32.2 million, you’re dealing with a +EV bet.

Should You Try to Become a Professional Megabucks Player?

If you can get an edge at Megabucks, can you just wait for a big enough jackpot and start playing and become a professional gambler?

Michael Bluejay has an excellent post about how expected value is useless when dealing with the lottery.

Megabucks isn’t exactly a lottery, but it’s the same concept.

When the odds get that long, they become essentially meaningless, even when you’re making multiple bets per hour.

The odds of being attacked by a shark are 1 in 3.7 million.

The odds of dying in an airplane crash are 1 in 5.3 million.

The only meaningful question about Megabucks is whether it’s worth $3 to play for entertainment value?

If it is, then a single spin on the game makes sense.

That’s about what it would cost to play Megabucks for an hour. Remember, you’re going to make 600 spins per hour at $3 per spin, putting $1800 per hour into action.

If you want to play for an hour, it’s probably going to cost you about $180 to play.

You only have 2 options if you want to win over a million dollars:

I think you’re better off just playing the state lottery every week if you want to try to win a million dollars. You’ll lose less money that way in the long run.

After all, if you spend $2 on a lottery ticket each week, it’s not going to change much about your lifestyle.

But if you’re putting money into a Megabucks slot machine, you’re going to lose a lot of money (probably) in the quest for that jackpot.

You’d be better off playing another slot machine game.

Or trying to parlay your winnings at a table game into a million dollars.

More about that in this next section:

Michael Bluejay has written the best page about trying to win a million dollars that I’ve read.

He provides an unmatched amount of detail on the odds for various games like the lottery and Megabucks.

But what’s better is the table game strategy he offers for winning a million dollars.

I don’t have the space to cover that strategy in detail here, but here’s the basic idea:

You choose a table game where you have a reasonable probability of winning, and you let your winnings ride in an attempt to work your way up to a total win of a million dollars.

Basically, if you start with a $5 bet and double it 18 times in a row, you have a million dollars. That results in odds of 200,000 to 1, which is still 3 times the odds of being struck by lightning.

But it’s still a way better number than the odds of hitting the Megabucks IGT jackpot.

What’s the big drawback of this strategy?

Most people won’t be able to put their winnings back on the table once they get to a certain point. Bluejay suggests that most people will reach that point somewhere between $2500 and $20,000.

The other big problem is finding a casino that will allow you to make a $500,000 bet. Good luck with that.

That’s the best I could do at providing comprehensive coverage of the Megabucks IGT slot machine game. Hope you enjoyed reading it.

Please leave a comment and let me know if I missed anything.