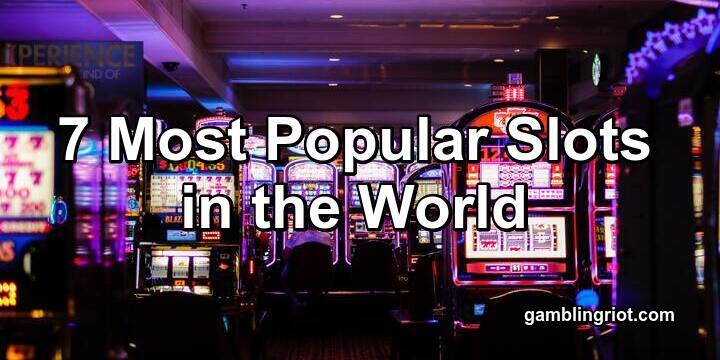 If you’re a fan of slot machines, as I’m sure most of my readers are, you might want to know which games constitute the most popular slots in the world as of 2021.

It’s hard to answer this question definitively, as most slot machine manufacturers don’t publish details about how many of their games are extant or how much money each machine averages. Also, which slot machines are near you vary according to where you live.

But I can draw some conclusions about which are the most popular slots based on projected search volume from various web marketing tools.

You can try hundreds of online slots for free or real money online right now. If you decide to play for real money, you’ll get a 350% deposit bonus on your first deposit. WildVegasCasino.

Using those tools and some common sense, as well as my own intuition, I’ve created this list of the most popular slot machine games as of 2020:

1- The Most Popular Slots Are ALWAYS Wheel of Fortune Slots

I read a book not long ago called Addiction by Design. It’s about slot machines and how they become so addictive. It also covers some of the marketing practices used by casinos and slot machine manufacturers.

The book made it clear that the most popular slots game in almost any casino is the Wheel of Fortune game.

The author related an anecdote about how IGT was trying to duplicate the success of Wheel of Fortune slots, so they surveyed players at casinos and asked them why they liked the game so much.

A huge percentage of them replied that it reminded them of their grandparents’ house.

Also, who doesn’t enjoy getting an opportunity to spin the “Wheel… of… Fortune…”?

I’m beginning to think that the most popular slots are the ones that remind us of our childhood. Monopoly is as emblematic of the board game experiences I had growing up as anything I could think of.

So why wouldn’t Monopoly slots be among the most popular in the casino?

Of course, as you might expect, the Monopoly slots game has reel symbols based on the game — you can expect to see the little dog, the thimble, the racecar, and the wheelbarrow, among other symbols.

As with many of the more popular branded slots out there, Monopoly slots come in multiple “flavors.”

Some of them you can even play online.

The game also has wild bonus symbols and a free parking bonus game.

The free games are a lot of fun, too.

When I was a kid, you could only see The Wizard of Oz once a year when it was on television. It was possibly the greatest film from Hollywood’s greatest year (1939), and watching it on TV was an annual family event.

Again, no surprise here — take a childhood icon and trade on its nostalgia for the sake of making money with a slot machine.

Like the other 2 brands mentioned so far, you can find multiple variations on this theme. “Ruby Slippers” and “Wicked Riches” are 2 more versions of Wizard of Oz slots.

The game symbols are characters from the movie — Dorothy, the lion, the scarecrow, and the tin man, but they also feature some of the iconographies from the film, like the ruby slippers and the cyclone.

The variations are available for various levels of rolling — low rollers and high rollers both like Wizard of Oz slots. The best variation is the penny slots version, in fact.

Da Vinci Diamonds’ popularity probably stems from its unique game-play. Instead of using spinning reels, the symbols just drop from the top of the computer monitor. Winning lines blow up, which means you get more symbols dropping down and more winning opportunities.

Most people know who Leonard Da Vinci was, too, even if he’s not as famous as Pat Sajak. He was a genius and a polymath, much like my hero, Benjamin Franklin. He was an architect, an artist, an engineer, an inventor, and a musician — and he was good at all of it.

The Da Vinci Diamonds slots game uses his artwork for the reel symbols. Some of the paintings used for symbols on the game include:

The other symbols in the game consist of diamonds and other precious stones.

The game is aimed at more high rolling clients, with a minimum bet of $1 per line on 20 paylines. You can also bet as much as $50 per line.

Besides the exploding gems and tumbling symbols, the game only offers free spins for a bonus game.

I’ve seen claims that Buffalo slots are the most popular slot machine games ever made, but I don’t believe it. Still, they’re popular enough to include on this list. Besides the classic game, you can find variations of Buffalo slots with intriguing names like Buffalo Gold and Buffalo Grand.

Are there more Buffalo slots in the casino than Wheel of Fortune games?

I don’t know. I’ve never counted. That might be a worthwhile project sometime, though.

It’s also popular in other gambling destinations like Australia, Canada, and Europe.

They keep releasing new variations, too. No matter what the new version does, it turns out to be popular with players.

The first variation was just called “Deluxe Buffalo slots.” It had adjustable multipliers, so you could decide to trade fewer free spins for bigger multipliers.

They also released a version called “Stampede.” I like this one because you get to actually watch the buffalo stampeding across the monitor.

Buffalo Gold and Buffalo Grand are both big-screen versions with spinning wheels — they’re clearly trying to compete with Wheel of Fortune.

I’ve even seen Buffalo slots where you could change the volatility setting of the game.

Volatility is an interesting concept on a slot machine game. The idea is that the fewer times you get paid off, the more volatile a game is, and you get bigger prizes on the relatively rare times you do hit a winning combination.

I remember when The Walking Dead was just a comic book series, long before it became a hit TV show for AMC. Once the show took off, though, Aristocrat wasted no time getting a license and manufacturing a game based on show. Casinos saw The Walking Dead slots hit casino floors in 2014.

It’s an award-winner, too — The Walking Dead slots were voted Casino Product of the Year at the Global Gaming Awards in 2014.

And gamblers love it.

Aristocrat is good at coming up with games that gamblers love, which is one way to create slots that casinos love, too. After all, if gamblers don’t play the game, it doesn’t make any money.

The Walking Dead is a penny slot machine game, but it’s also a progressive jackpot game. You can win half a million dollars or more when the jackpot gets big enough.

Zombies were all the rage before superheroes became the genre du jour. You’ll see plenty of zombies in The Walking Dead slot machine game, too, because they use them as reel symbols. They’ve also added videos from the television series to the game-play experience.

The official The Flintstones slot machine is a WMS product, and it’s also available online from casinos powered by Playtech. It’s an example of these new 1024 ways to win slot machine games. You can play for anywhere between 40 cents and $40 per spin.

The game is hosted by the main characters from the show — Barney, Betty, Fred, and Wilma are all on hand. The Great Gazoo is also included as a bonus symbol. I loved the bonus game where Fred does some bowling.

This is another great example of a slot machine game that became popular because of its nostalgia value. If you’re my age, or maybe even a little older, you have fond memories of watching The Flintstones on TV. After all, they were The Simpsons before there was The Simpsons.

The one thing I don’t like about the game is its use of playing card icons. That always seems lazy to me.

The Most Popular Slot Machines Aren’t Always the Loosest Slots

I’m always fascinated by the folks who are desperate to find the loosest slots. You’d think that the most popular slot machines would also be the loosest slots, but that’s not necessarily the case.

In fact, it’s almost impossible to define what exactly constitutes “loose” with a slot machine game. Do you measure it by hit frequency or payback percentage? Or do you use some other metric entirely?

“Hit frequency” is just a metric that describes how often you’ll see a spin with some kind of payout. Hit frequencies generally range from 20% to 40%. Usually, the higher the hit frequency is, the lower the average prizes are.

It’s easy to see how a low payback percentage can cost a slot machine player a lot of money. After all, most slots players make at least 500 spins per hour, and every spin exposes you to that house edge.

But those are the games that seem to be most popular.

Those are my best guesses as to which games are the most popular slots in the casino.

Did I get them out of order?

Did I leave out a popular game?

Let me know how I did in the comments. I hope you enjoyed the post.