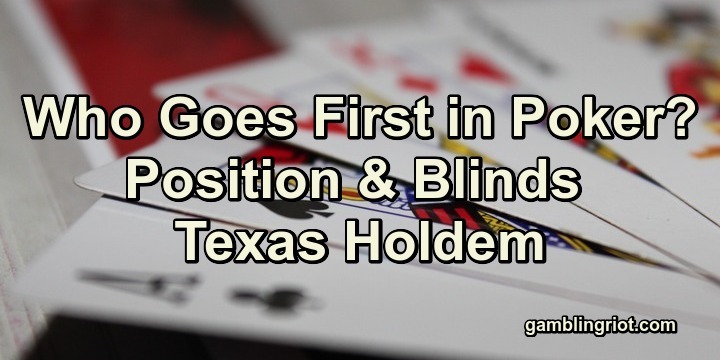 If you’re new to Texas holdem (or any other poker game), one of the first things you need to learn and understand is who goes first in poker. In Texas holdem games, this is related to your position relative to the blinds. In other games, other criteria determine the order in which you bet.

The purpose of this post is to explain poker rules related to the position and who bets first and reveals first. It can be a complicated subject if you’re new to the game, but it’s hard to overstate how important it is.

You can play Texas Holdem Bonus Poker and other poker games free online right now. Or you can play for real money and get a 350% deposit bonus. WildVegasCasino.

How the Blinds Work

The blinds are forced bets, similar to antes that stimulate the action at the poker table. Unlike an ante, you only need to post a blind twice every rotation around the table.

For example, if you’re playing in a $4/$8 Texas holdem game, the bets during the first 2 rounds are made in $4 increments. During the second 2 rounds, the bets are made in $8 increments. The blinds for such a game are usually $2 for the small blind and $4 for the big blind.

Texas Holdem Rules Related to Position, or Who Bets First in Texas Holdem?

The rules for Texas holdem related to position are actually simple enough, especially if you just look for the button. Preflop, after you get your first 2 cards, the players bet in order starting with the player to the immediate left of the big blind. The player in the big blind is the last to act in this betting round.

Betting always happens in turn, moving clockwise around the table.

Here’s a list of who bets and in what order in Texas holdem :

It’s rude and inappropriate to bet when it isn’t your turn. Even if you’re going to fold, wait until it’s your turn to act. It’s not fair to the players acting later to know what action you’re planning to take.

What Position Is Best in Texas Holdem Poker?

If you’re smart, you’ve probably already started to think about the strategic implications related to position. That’s good, because position is one of the most important aspects of the game.

It seems obvious to some, but not to others, that the later you get to act, the better off you are. The later you act, the more information you have about the other players and their plans.

Let’s say you’re the first person to act preflop, and you have a pair of 10s. That’s a playable hand. You raise the big blind, so you put $8 in the pot.

When it’s your turn to act again, you really don’t have much choice but to fold. The probability that at least one of those players has a higher pair in the hole than you do is just too great to continue to put money in the pot.

On the other hand, if you’re the last person to act before the blinds, and all the players before you either limped in or folded, you might well be justified making a raise here. Since none of those players showed any strength before you acted, there’s a good chance you have the best hand preflop. If one of them is sandbagging, you can still play and see what the flop looks like.

To win at poker, you need to understand positional advantages.

This position advantage–the knowledge of what the others players who’ve acted first has done–continues throughout the game until the showdown. (I’ll have more to say about the showdown soon, too.)

By the way, this is how position is handled in related games, too, like Omaha and pineapple.

First, let’s talk about position and betting in the other popular variations of poker.

Who Goes First in Draw Poker?

5 card draw poker is mostly played with an ante, but that ante doesn’t affect the order of betting. Everyone has to place an ante before getting a hand.

In fact, in 5 card draw poker, the order of action is simple.

Betting just goes in clockwise order, starting with the player to the immediate left of the dealer. This is the order of action throughout the game, which only has 2 rounds of betting anyway.

Who Goes First in Stud Poker?

Position and betting in stud poker is more complicated than in draw or stud poker. Most stud games have an ante, but during the first round of betting, the player with the lowest face up card must place a “bring-in” bet. The size of the bring-in bet is usually half the size of the lower betting amount. (In a $10/$20 stud game, the bring-in would be $5.)

The bring-in also has the option to “complete” the bet, which would mean raising the size of the bet to $10.

Betting continues around the table clockwise, with the person to the immediate left of the bring-in continuing to act.

In all the subsequent rounds, the first player to bet is the player with the best hand showing. Since there are usually fewer than 5 cards showing, the best hand is usually determined by who has the highest card, the highest pair, or even 3 of a kind.

But there aren’t usually enough cards showing for someone to have a flush or a straight and bet first. Incomplete hands like this don’t count toward who goes first.

This has the interesting effect of changing who the first player to act is every round.

In all poker games, if more than one player stays in the pot (doesn’t fold), the game ends with a showdown. During the showdown, the players reveal their cards. The player with the best 5-card poker hand wins the pot.

There are a couple of things to remember about the showdown:

The first is that you must expose all your cards to win the pot, even if not all those cards count toward your final 5-card hand.

The second is that “the cards speak.” You get credit for the best possible 5-card hand you can make, regardless of what hand you announce.

Who Has to Reveal His Cards First in Poker?

Some players prefer not to reveal their cards at the showdown if they’ve lost. They don’t want to give any information to their opponents about how they play. This is good strategy.

But who has to reveal his cards first?

This is the same regardless of which variation you’re playing.

The last player to bet or raise is the player who must show his cards first. If everyone has checked or is all-in, players reveal their hands clockwise starting to the left of the dealer.

If you don’t have the winning hand, you can “muck” your cards, which means you put them in the pot without revealing them. You also give up any claim to the pot. Depending on the cardroom, you might be allowed to ask to see the mucked cards.

When Are You Allowed to Show Your Cards in a Poker Game?

You’re only allowed to show your cards at the showdown or if there’s no more action following you. To show your cards before that provides information to the other players that they don’t need to have.

Different casino cardrooms handle this situation differently. In some casinos, if you expose your cards early, they muck your hand. In others, play continues, but the other players will almost certainly be irritated by your behavior.

Also, it’s considered unsporting to show your cards to another player without showing them to all the other players.

If you accidentally show one card, most players don’t get too upset, especially if it’s an honest mistake. If it happens repeatedly, expect to get a warning.

Just like any other skill, practice is key. When I first started playing poker I would just play hands over and over again when my college buddies. Now that online card games are available you can practice until you’re comfortable with all the positions and always know who goes first in poker.

Online casinos are a fantastic way to try different positions and hands when you play demo versions of the poker games. You are usually given free hands to play and there’s no money stake so if you make a fumble your wallet won’t feel any pain.

Another way to practice and who goes first in poker is to visit a casino during slower times. Dealers are usually more than happy to show you to play poker if their table is empty. This is great opportunity to get inside advice from an industry professional/ I’ve found dealers to be the best at practicing poker positions with and get under tips. Just make sure you tip them for their time and the free coaching.

Who goes first in poker is one of the most important rules you can learn, in Texas holdem or any other variation. I’ve covered the basics in this post, but you should study this until you understand position and its implications well.

If you need to, practice online in free poker games until you grok all the concepts above.