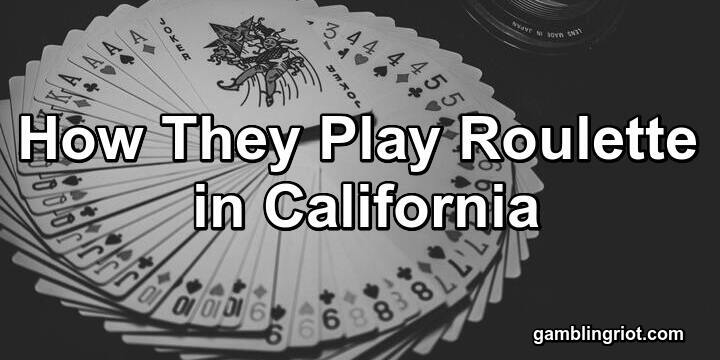 Casinos in California host roulette games that don’t use roulette wheels. I want to write a post to clear the air about California-style roulette, similar to what we did for California craps.

This post offers all the details you need to understand the game of roulette in California. Luckily, the roulette with no roulette wheel game in California is almost identical to the standard American roulette game with different game equipment used to arrive at the same kind of outcome.

Because the traditional spinning-wheel and bouncing-ball setup of roulette is literally illegal in California, if you enjoy playing roulette mostly because of the game’s props, you should make the drive to Vegas to play.

Also, if you love spinning a roulette wheel you might want to play roulette in a different state.

You can play roulette online for free, no matter which state you live in. And when you play for real money, you’ll get a 350% deposit bonus on your first deposit. WildVegasCasino.

California Casinos Use Playing Cards Instead of a Spinning Roulette Wheel

American gaming law can be both maddeningly vague and hilariously specific.

In California, a few traditional casino games are explicitly outlawed. Among them are games that are no longer in high demand – care for a round of Hokey-pokey or Rondo, anyone? – but also some casino classics. California roulette represents a successful attempt to get around gambling law that disallows props like wheels and dice.

In California, playing card games are seen as rewarding skill at least as much as luck, regardless of the rules of the game. Without getting too deep into legalese, just know that the only legal gambling device is a deck of playing cards.

You can’t use a wheel, dice, or any other gadget besides playing cards to produce results. As a result, crafty Californians figured out how to use playing cards to reproduce roulette and craps play.

California isn’t alone in this kind of legal nitpicking. Oklahoma casinos currently offer craps games based on playing card outcomes, due to a ban on the use of dice for gambling in the state.

California Roulette – How Does It Work?

The slots on the roulette wheel are replaced with larger ones designed to hold playing cards. Just like in typical American roulette, the wheel has 38 slots, alternating between red and black suits to replicate the red and black pockets on a typical wheel.

These playing cards aren’t standard – they’re numbered between 1-36, and there’s one card marked 0, and another marked 00, again to replicate a traditional double-zero roulette wheel.

Once you get used to the different wheel, actually playing the game will seem familiar. The dealer spins the wheel, and eventually the wheel’s pointer will indicate which card (which number) wins.

Because California roulette is based on American roulette, with the same number of spots and the same types of bets and payouts, the odds are no different. American roulette gives the casino a 5.26% advantage. There’s one bet, the “basket” bet, that gives the house a slightly better edge at 7.69%.

The house edge in double-zero roulette mainly comes from the inclusion of the zero and double zero spaces, which aren’t red or black. That’s because a bet on black, for example, is a bet against 18 red numbers plus the 2 green numbers. That gives bets on black real odds of 18/38, or about a 47.4% chance of winning. If these bets paid out at better than even money, they might offer value. That’s where the casino makes their money.

It would be much in the player’s favor to find a single-zero California roulette wheel. Taking away one green zero space reduces the house edge to 2.7%. almost half the casino’s take for American style roulette. They exist, but they’re rare. Further down in this post, I’ll share a little bit about the one single-zero California roulette game I’ve played.

La Partage is a roulette rule variation most often found in European style games, particularly tables identified specifically as French roulette. You’ll sometimes find La Partage or some other form of this rule in American casinos, but it’s uncommon.

Some California roulette games use the La Partage rule, so I thought I’d share a little about that.

If you find roulette in California with this rule, you should check it out. Basically, when this rule is in play, you can reclaim half of your losing even-money wagers if the result is a green zero space. If you’re making a La Partage-eligible bet (any even-money wager, like black/red or odd/even), the casino’s edge is cut almost in half, to 2.63%.

Casinos don’t mind offering this rule because it only affects some even-money bets, small potatoes. I think of this rule as a loss-leader for California casino roulette play in general, bringing in bettors who might otherwise scoff at a 5.26% edge.

I’m having a hard time finding a California casino roulette game with an active La Partage rule, though I know they existed as recently as a couple of years ago. If you know of one, please leave a comment and I’ll add it to this post.

The dealer deals three cards from a 37-card deck, with cards numbered 0 to 36. Each card represents a region on the table, 0-12, 13-24, and 25-36. The spot where the ball lands is used to determine which card, if any, is flipped over. That card’s number determines the outcome.

The only real benefit to this setup is that it looks and feels a little more like traditional roulette, though the inclusion of cards for the real result is still “other” enough to make the game feel truly like California roulette.

How They Play Roulette at Pala Casino Spa Resort

At Pala, the roulette wheel has 38 slots, making it a traditional double-zero roulette game. Instead of playing cards, each slot has one of four colors. There are 12 red, 12 white, and 12 blue slots along with 2 green slots.

Alongside the wheel is a 38-card deck, numbered 00-36. The dealer deals four cards and puts them on four different colored regions of the table, one for each color. The ball lands in a colored slot, which determines which of the four cards is flipped over. That card determines the outcome.

It’s a little convoluted and doesn’t play even as smoothly as the game at Barona. There’s also an additional bet, called Super Green, which offers a 275:1 payout for the ball landing in a green space and the drawn card representing a green space.

It’s a sucker bet, but if it adds to your experience, and you understand the long odds, I say go for it. The house edge here is 23.55%, only about 4 times worse than a standard roulette bet. You have about a 0.28% chance of winning.

There’s no way to beat the house playing a game like roulette. The inclusion of playing card props doesn’t do anything to change the mathematics behind the game, the same math that guarantees the house will always win.

Anyone looking to strategize their California roulette play should stick to basic roulette strategy. That means controlling how much you bet, searching for games with the best odds, understanding game odds and payouts, and only playing roulette when you’re having a good time.

Following things like the Martingale system can make roulette play more fun, but it can’t help you win more. In fact, some casinos discourage this kind of betting, and may ask you to cut it out.

Can You Play California Roulette Online?

I hadn’t considered this question until I started doing some reading on the subject of California-style roulette and noticed in some forums and other places that people were asking to play California roulette on their laptop or phone.

As far as I can tell, there’s nowhere offering card-based roulette games for play online, for free or for real money.

Really, it’s kind of an odd request. You have plenty of options to play either single-zero or double-zero roulette online, there’s no need to seek out a playing card-based game like California roulette.

If you live in California and want to play roulette, I found a list of 62 active sites offering the game, in 27 different counties, literally dotting the state’s big population centers. Go try it out in person.

The goal of this post was to answer any questions people might have about how they play roulette in California. Did I nail it, or did I leave something out?

I’d love it if some regular California roulette players chimed in with comments and helped me develop this post a little more.