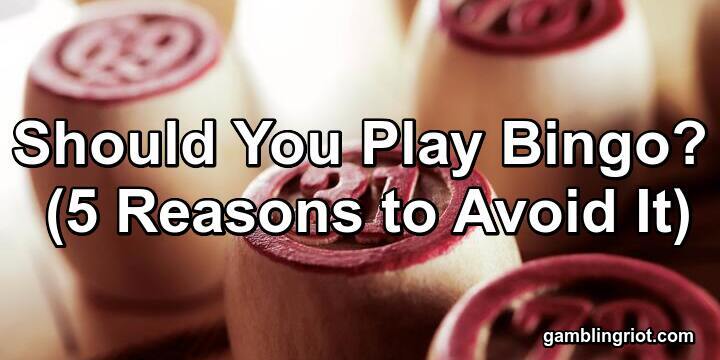 This might sound kind of strange, but it’s true:

Bingo is most common, most popular, and most widespread form of gambling in the United States.

Does it sound funny to call bingo “gambling?”

You pay an entry fee, there’s an element of chance that can’t be influenced by skill, and you stand to profit if you win.

If you’re a gambler you might think to yourself, “Should you play bingo?”

Should you playing bingo?

Here are 5 reasons why you should never play bingo:

1- The Odds Are Easily the Worst in All of Gambling

So I don’t say this lightly, but the truth is that the odds in bingo are going to be worse than in any other form of gambling you can think of.

And that includes keno, which is known for having atrocious odds.

Okay, I take that back a little bit. You’re going to find worse odds when playing the lottery or playing scratch cards.

But other than that, you’ve got a snowball’s chance in Scottsdale’s chance of winning.

The only way you can increase your odds of winning is to do the same thing you do in the lottery or with scratch-offs:

But in the scenario above, you’d have to play with 20 cards to increase your odds significantly.

That means you still have 90% chance of losing.

That all sounds good until you realize that everyone else knows this is the way to win as well. So in reality, most rooms with 200 players are going to have an average of 5+ cards per player.

Do you really want to play a game where you have almost no chance of winning?

And worse, where even if you win you don’t really win that much?

And do you want to spend hours doing it?

No, of course you don’t.

Spend 15 minutes at the blackjack table instead.

You’ll have a much better chance of winning.

I don’t know about you, but spending hours in a smoke-filled room with a bunch of retirees doesn’t exactly sound like a party.

And you just don’t have much of that when you’re playing bingo.

If fun is what you’re after, the casino has it in spades. You can have some serious fun at the poker table if you love the psychological games that players play and love trying to figure out people’s tells and how to outwit your opponents.

If you love suspense, then the craps table or the roulette wheel is the place for you. Both games have a serious level of suspense that’s re-created over and over every time the game moves forward (as opposed to a single time during a round of bingo).

If you love to be social, then blackjack, craps, and poker are all great social games.

Heck, even roulette is social.

Craps is a particularly social game because you’re all making bets together (most of the time) and winning or losing as a team.

Poker is a great social game because there’s a lot of down-time. You have plenty of time to chat while other players are making their bets or deciding how to play.

Bingo includes the smallest portion possible of all these elements. It just can’t stand up to the big casino games.

3- The Prizes Are Ridiculously Low or Hard to Win

I ‘ll admit that there have been some changes in the world of bingo in the past few years that have led to increased jackpots in some casinos and in some states.

But for most people, winning bingo is going to be about as lucrative as winning a few pots at the poker table or winning a few good hands of blackjack.

The amount of money that you can win in most cases is ridiculously low compared to so many other casino games that you might as well not even bother.

With the advent of progressive bingo and with some casinos/states increasing limits, yes, it is possible to win upwards of $10,000 or $100,000.

But your odds of actually winning that are usually stupidly low.

That’s because so many bingo halls are only able to offer these giant prize amounts by adding even more requirements for you to win. For example, you don’t win $100,000 just by hitting bingo. You often have to win in a specific pattern within a specific number of calls.

4- Bingo Is a Waste of Time

I want to stress that playing bingo is a huge waste of time for the serious gambler.

If your goal is to make money gambling, then time is money.

If time is money, you need to be spending it on games that move quickly, and that includes literally every other game in the casino except bingo and possibly poker.

Are you tempted to argue that poker is a slow game too?

I won’t argue with that.

But I’ll say that even though it moves slowly, you can definitely win a series of pots quickly and walk with money in your pocket.

That’s absolutely not something you can do with bingo.

The best way I can describe bingo is as a live lottery.

In a sense, the winner is predetermined. The numbers are going to be called at random, and however it goes down, only those people lucky enough to have the right card are going to win.

You can’t influence the outcome. You just have to sit there and mark off numbers as they’re called.

The lottery is the same. You pick the numbers, but the winning numbers are essentially predetermined. There can only be 1 winner. You just have to give it a go and see if it’s you or not.

Does sitting at home and watching lottery numbers being read off sound like fun to you?

Then why would it be fun to do that in a big hall with a bunch of other people?

There are much better uses of your time in the casino.

Don’t waste it in the bingo hall.

5- Should You Play Bingo? How Bad Is It for You

I’m not going to try to argue that other casino games are good for your health, especially if you’re wolfing down sandwiches and chugging drinks while you play.

But sitting in a chair for hours at a time and breathing in the smoke of other players (while probably eating sandwiches and drinking alcohol) is decidedly worse.

From a health standpoint, poker is probably just as bad.

But in plenty of games, you can stand while you play and get your blood pumping every time you win or lose.

Bingo just can’t hold a candle to those other games. There’s no excitement to get your heart rate up.

And unlike all those other games, you’re probably going to be in that chair a lot longer without getting up when playing bingo.

What do you think?

Do you think bingo is a great game?

I’d love to hear your reasoning.

Let me know if you think I’m wrong in the comments.