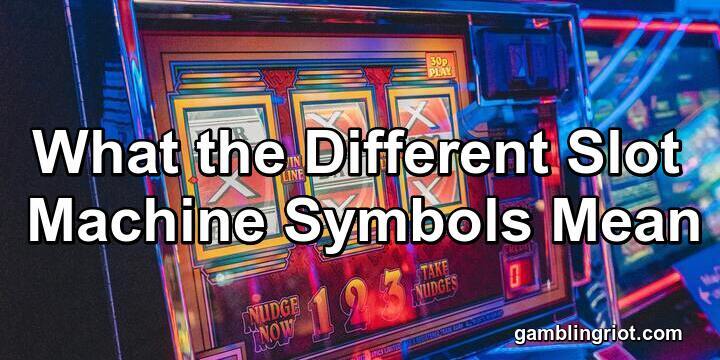 The purpose of this post is to take a detailed look at some of the inner workings of slot machines, especially as it relates to the slot machine symbols most commonly in use. I’ve written other posts about slot machines, too, including this one about where to find them nearby.

The traditions behind why slot machines use bar and fruit symbols are decades old, and the history of slot machines is fascinating all by itself.

In this post, I explain what the different slot machine symbols’ meanings are and why it matters to the average player.

1-What Does the Bar Symbol Mean on a Slot Machine?

Slot machines have been around since the 1890s. You’d find these early slot machine games in bars and taverns in cities like New York and San Francisco. When gambling became illegal, these businesses started giving away candy and chewing gum instead of money.

Imagine going into a bar today and putting money into a slot machine with the opportunity to win a free drink or a cigar.

That’s what gambling in a tavern was like in the 1890s.

What does the bar symbol mean?

My first guess would be that the bar symbol on a slot machine symbolized a candy bar, but that would be too big. After all, keep in mind that the idea was to have prizes that were small, like coins.

The bar symbols on slot machines represent sticks of chewing gum — specifically, BAR chewing gum. (It was a popular brand of the Bell-Fruit Gum Company at the time.) They were in color in those days, and different colors meant different flavors of gum.

Slot machine makers still use bar symbols out of tradition, even though I’ve never seen a slot machine game that offers gum as a prize.

2- What Do the Fruit Symbols Mean on a Slot Machine?

Just as the bar symbol meant you were going to win chewing gum, the various flavors of fruit-inspired candy were prizes you could win. Cherry symbols meant winning cherry-flavored candy.

Obviously, the picture of the fruit in question represented the flavor of candy you won.

And, again, the reason these symbols are still in use have more to do with tradition than anything else. People are just used to seeing these symbols on these games.

3- How Many Different Symbols Are There on a Slot Machine?

An average slot machine game might have about 20 symbols on each reel. This does NOT imply that each symbol has a 1/20 probability of coming up on a spin, though.

Modern slot machines use a random number generator to determine their results. These are actually random — they’re not fixed or rigged in any way.

The casino makes its money because the prize schedule for a slot machine game pays prizes in such a way that the game is inherently profitable.

Think about it this way:

Suppose you played a casino game where you had a 1 in 600 probability of winning, but when you won, you only got a payout of 500 to 1.

Do you see how that would be profitable for the casino?

Such a game would have a house edge of around 17%, on average.

The payouts on a slot machine game are more complicated than that, but it’s the same principle.

4- What Are the Odds of Winning on a Slot Machine?

Here’s the thing about slot machines:

You don’t know what the odds of winning are.

And, to an extent, the odds of winning are irrelevant. What you’re really concerned about is the payback percentage.

That’s a ratio that compares the odds of winning with the amount you win. Over time, it represents the long-term average of how much money the casino will win from you on each bet.

So it’s fair to see that on most slot machines, your odds of winning something are 3 to 1 or 2 to 1.

The problem is that the payouts aren’t commensurate with these odds of winning.

Also, slot machines pay off bets on an X for Y basis rather than an X to Y basis.

In blackjack, your payouts are in addition to what you risked. Bet $5 on a blackjack hand and win, and you get a 1 to 1 payout, or even money. You get your $5 bet back with $5 in winnings.

Gambling machines, though, pay back with odds on a 1 “for” 1 basis. Bet $5 on a spin of the slot machine reels, and you get $5 in winning in exchange for your $5 bet.

The machine acts like it’s a win, but the reality is that it’s a push.

This is also one of the reasons slot machines measure their odds using payback percentage rather than house edge.

When a slot machine game has a 90% payback percentage, it means that on average you get back 90% of each bet. Place a $5 bet, and you’ll get an average of $4.50 back over time — which means you’ll lose 50 cents per bet on average.

And that’s just the average including any jackpots you win. If you play in the short-term and don’t see a jackpot, you’ll usually see a lower payback percentage until you get some winnings and catch up.

5- Which Slot Machine Has the Best Payout?

How do you know which slot machine has the best payout?

The short answer to this question is easy enough:

You have NO WAY of knowing which machine has better payouts than the other machines. In fact, you can play an identical slot machine next to the one you started on and be facing a different payback percentage.

The casinos have no rhyme or reason in terms of where they place the higher and lower payout machines.

Stop worrying about which slot machine has the best payout.

Worry instead about how much fun you’re having — or not. If you don’t enjoy a specific game, move on to another game.

6- Why Are They Called “Slot” Machines?

They’re called slot machines because you put your money into a slot to play.

When they were first invented, slot machines only worked on a literal coin-in and coin-out basis.

Now, of course, most slot machines work by accepting bills and spitting out a piece of paper with the amount you’re owed on it.

But we haven’t changed the name of the games.

Also, it’s not called a slot machine in other countries, always. In the United Kingdom, they’re called fruit machines. In Australia, they’re called “pokies,” which is short for poker machines.

That last nomenclature comes from their original nature — the first slot machines, which predated the machines that gave away candy — used playing cards to produce random results instead of symbols on metal reels.

7- Who Invented the Slot Machine?

According to the Encyclopedia Brittanica, as well as many other legitimate sources, Charles Fey invented the first slot machines.

He born in Bavaria but was making his living as a mechanic in San Francisco when he invented slot machines in 1894. It didn’t take long for him to be doing so well that he started a factor to produce more slot machines.

The first 3-reel slot machine with machine-generated payouts in real money was invented in 1898, also by Charles Fey. The Liberty Bell, which most modern slot players would recognize as a real slot machine, came along in 1899 — another Fey invention.

There are only 4 Liberty Bell machines still extant.

Also, it didn’t take long for other companies, like the Mills Novelty Company, to steal Fey’s invention and start making money from their own versions of it.

With the boom of online casinos, we’ve seen a lot more different slots machine games and slot machine symbols meanings. Until the Mid 1970s, there wasn’t a lot of variations in the symbols slot machines used then casinos started introducing video slot machines that were powered by computers rather than a manual machine.

The move to computer-powered slot machines gave slot machine manufacturers a plethora of slot machine symbols and what their meanings might be. You might see an Egyptian themed slot machine that uses pyramids and mummies as their symbols instead of the traditional bars and fruit symbols.

If you’re playing at an online casino make sure you understand the different slot machine symbols meanings before you dive into the game. Most sites will give you demo plays to get a better grip on how the online slot machine works.

Those are the most accurate and concise answers to some of the most common questions about slot machines and their symbols on the internet.

What other questions do you have besides what do the symbols mean?

Leave me a note in the comments, and I’ll respond with an answer if I can.