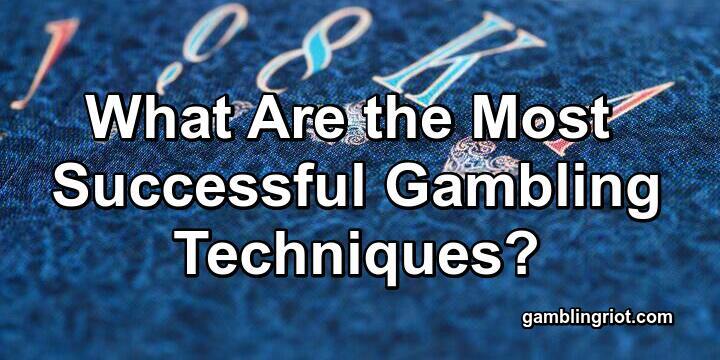 It’s clear that some gambling techniques work better than others. That’s one of the reasons some poker players have won the World Series of Poker Main Event on multiple occasions.

I wanted to write a post that didn’t limit the most successful gambling techniques to just poker strategies, though. I wanted to provide a list of 7 wildly different gambling strategies and how they work.

Let me know what you think of these 7 most successful gambling techniques in the comments section.

Here’s an example of how it works

In roulette, you have a 47.37% probability fo winning a bet on red or black. That’s close enough to 50% for most of us. If you save up $5000 and want a reasonably good probability of doubling your money, betting it all on black is as good a way to do that as any.

Contrast that with the idea of dividing your bankroll into 4 equal portions and placing that bet 4 times in a row with a goal of doubling your money.

What is the probability that you’ll be successful?

You have more potential outcomes in this scenario:

These outcomes aren’t all equally weighted, either — you don’t have a 20% probability of achieving each.

This is a successful gambling technique almost half the time if your goal is to double your money.

I have so much to say about blackjack that it isn’t funny. I’ll start by pointing out that counting cards isn’t cheating, regardless of what the casinos say.

I’ll also point out that it isn’t as hard as you might think.

Understand that in blackjack, when you’re dealt a 2-card hand totaling 21, you get a 3 to 2 payout. The only 2 cards in the deck which can give you a total of 21 are the 10 and the ace.

If you removed all the smaller cards from the deck — the 2s through the 9s, your probability of getting a blackjack would skyrocket.

So it follows that as the smaller cards get dealt, your probability of getting a blackjack (that 2-card 21) increases.

But you also have to account for the 10s and aces coming off the deck. It’s about the ratio of high cards to low cards.

Card counters don’t keep track of all the cards that have been played. They just track high cards versus low cards.

When the count is positive, the deck has a proportionally higher percentage of big cards in it.

When the count is negative, the deck has a proportionally higher percentage of small cards in it.

If you raise the size of your bets when the deck has more high cards in it, you’re putting more money into action when you have a better probability of getting that 3 to 2 payout.

Of course, you also need to do things like account for how many decks are in use. And you have to start over every time the deck gets shuffled.

You also need to be able to do all of this without the casino staff realizing what you’re doing.

If you can do all that, you can make money in the long run by counting cards.

Your goal when counting cards is to maintain an edge over a long period of time and grind out winnings.

Everyone who has read articles about how to win money gambling has heard the following advice:

The players club card enables the casino to track the amount of money you put into action so that they can rebate some of that money to incentivize your continued play.

They base this on a tiny percentage of your action — usually at a rate of about 0.2%.

Since you’ll be winning some of those spins, you won’t lose that entire amount. The casino expects you to lose an amount in the long run equal to their mathematical edge. Most slot machines have a house edge of at least 5%.

The casino will also reward you with rebates in the amount of $7.20.

It’s clear how profitable the rewards program is for the casino, even though you still get those rewards even when you win.

You see, the casino isn’t interested in your actual results on an individual gambling session. They’re counting on making their money in the long-run expected value of all your bets over time.

But some players know how to take advantage of the comps program in a way that makes it profitable for them.

How do you do that?

For most players, this means playing blackjack.

Basic strategy is the mathematically optimal way to play every hand in the game. If you memorize basic strategy and use it to inform all your decisions, you can reduce the house edge on that blackjack game to 0.5%.

Of course, this still leaves the casino with a 0.3% average profit on your action.

How do comp wizard techniques compensate for that?

They use a combination of strategies to convince the casino that they’re putting more money into action each hour than they actually are.

See, when you’re playing a slot machine, a computer tracks how much money you’re gambling to the penny.

But when you’re playing a table game, the pit boss rates you with an average bet per hand and an average number of hands per hour. The hourly action is an estimate.

You can look like you’re putting less money into action in 2 ways:

You should read a book by Max Rubin called Comp City if you want to really dig into this strategy.

I promised to not provide a bunch of poker tips, and I think I’ve succeeded.

But I can’t advise you on the most successful gambling techniques without at least mentioning playing expert poker.

Poker is, in fact, one of the only gambling activities where you can get an edge.

It isn’t easy, though. The best estimates I’ve seen suggest that less than 5% of all poker players are consistently profitable.

How do you play expert poker?

Any good book on the basics of Texas holdem is a good place to start. You can then move on to learning the basics of strategy. I suggest Small Stakes Holdem : Winning Big with Expert Play from Two Plus Two Publishing as a good starting point.

The trick to winning at poker is to exploit every possible advantage you can at the table. This means playing the appropriate percentage of hands at each stage of the hand. It also means being able to calculate outs and pot odds, as well as being able to put opponents on a range of hands.

5- Play Craps the Smart Way (and Get Lucky)

Learning how to play craps is easier than you might think. And playing smart is easy, too. I’m not going to cover the intricacies of shooting dice here.

Instead, I’m just going to point out that craps is one of the streakiest games you can play, so getting on a lucky streak in craps can be a satisfying and exciting casino experience.

I’m also going to mention that you should stick with the most basic craps bets at the table:

If you stick with those bets and ignore the proposition bets that the stickman is trying to sell you, you’ll have plenty of winning craps sessions.

The house still has a mathematical edge in craps, but you’re more likely to have a winning session at the craps table than you are in most other casino games.

I’ve written about the best possible roulette strategy elsewhere, but I’m going to offer another, different strategy here. It works with online roulette just as well as it works with traditional roulette in a land-based casino.

Your goal is to win a single-number bet.

The odds say that in 38 spins of a roulette wheel, you’ll win a single number bet once.

So you start by setting aside a bankroll of 38 bets for your roulette session. If you want to play for $10 per spin, you’ll need $380 for this strategy.

At that point, you’ll do one of 2 things:

You’ll quit and pocket your winnings. You’ll have a small profit and can return to play again another day.

Or…you’ll take those winnings and try to parlay them into a bigger win. You might decide to take your original stake and set it aside, and then try to win another single number bet by continuing to place single number bets with your profit.

I prefer another strategy, though.

I take the amount I’ve profited from that single number bet and place a bet on red or black. Now I have a 47.37% probability of doubling my profit before walking away from the table.

You can come up with plenty of other simple roulette strategies that work at least part of the time.

All of these strategies will be superior to whatever slot machine strategy you’re used to using.

7- Handicapping Football Games (Or Any Other Sport, Really)

A few years ago, I read a great book about making a living as a gambler. One of the things the book suggested was that sports betting was the most profitable opportunity of all.

But you have to be able to get an edge over the books, which is harder than it sounds.

Here’s why it’s so hard:

First, the books don’t let you just pick which team will win. You have to pick a team that’s going to win based on the point spread. In other words, a team has to win by a certain number of points before you bet pays off.

The favorite will have a negative number next to it on the toteboard. For example, it might read Dallas Cowboys -8.

This means that when it’s time to settle the bet, you must subtract 8 for the Cowboys final score before determining the winner.

If subtraction is harder for you than addition, you could add the 8 points to the underdog’s score. It’s the same effect.

The books do this to make each bet more of a 50/50 proposition, and the handicappers who work for the books are good at this. When they set a line, they generally create a situation where you really do have a 50% probability of winning.

But books add one more wrinkle to the process.

This means you’ll need to win about 52% of your wagers… Just to break even!

How do you profit from betting on football, then?

You find situations where the line is off by enough that you have a greater than 53% chance of winning the bet.

Keep in mind that a lot of the time, the sportsbook’s goal is just to get an equal amount of action on each side. This guarantees them a profit. The losers pay the winner, and the extra $10 on all those $100 bets is their profit. It’s called the “vig.”

If the public bets one side heavily, the book might move the line in the other direction to stimulate action on the other side.

It’s usually better to bet against the general public when you can.

But coming up with a profitable strategy is a little harder than that. If it weren’t, everyone would be a professional sports bettor.

Here’s the thing about gambling:

No matter how successful various gambling techniques have been in the past, gambling is inherently random.

This means you should never gamble with money you can’t afford to lose.

Think of your gambling as an entertainment expense, and you’ll never regret your losses.

1 thought on “What Are the Most Successful Gambling Techniques? (A List)”