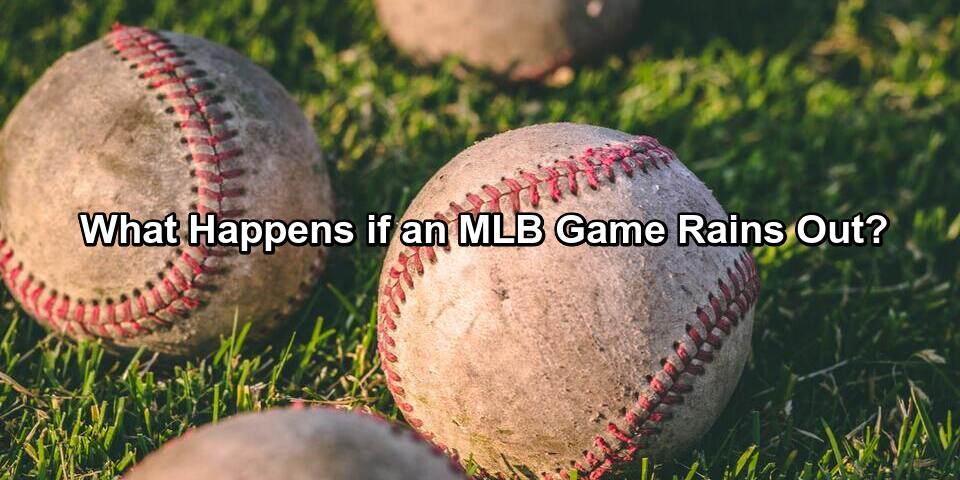 My wife is a new baseball fan. It’s an exciting time, because it means I get to answer lots of good fundamental questions about the game. The other day she asked me what happens if an MLB game rains out.

It turns out the answer to that question is really interesting and brings up a lot of good basic points about the game that I think are important.

In this post, I answer that question, and also provide some thoughts from an MLB bettor’s perspective. This information probably won’t help you win a million dollars betting on baseball, but it might be a small ingredient in your recipe.

Once the game starts, the umpiring crew gets this responsibility. For the most part, they won’t stop play unless the rain impedes play. Sometimes they’ll stop play if there’s lightning or strong wind, too. In short, a drizzle won’t stop a game, but a downpour, lightning, and hail probably will.

A game is “delayed” when the teams must wait out the weather. A delayed game is a game that’s likely to continue.

This is a really fun time, by the way. MLB teams get up to lots of shenanigans during delays. Most of it doesn’t make it to TV. You just have to be there to see it.

If a delay goes on more than 75 minutes, the game is “suspended.”

What does that mean?

It’s complicated, and it involves a new baseball rule.

We’re living in the brave new world of the modern MLB.

Robot umps, automated balls and strikes, and pitch counts are creeping up from AA and AAA ball.

Owners (and audiences) want shorter games, so in marches the technology.

But it’s not just cameras and algorithms changing the game. Some long-standing rules are shifting.

Starting in 2020, the MLB implemented the new rain delay rule. Once upon a time, rain-suspended games would be “rained out” entirely, with all stats and performances cleared out as if the game never happened. The game would be rescheduled at a later date, usually creating a new double-header rather than sacrificing a precious off day.

It sounds more confusing in print than in practice. Basically, instead of totally replaying a washed-out game, they replayed the game from the point it was delayed.

An Example of the New Rain Delay Rule

We got a great example of the new rain delay rule early in the 2022 season.

The Houston Astros were visiting the Minnesota Twins on Wednesday, May 11th. A historic rain storm swept through Minneapolis, spinning dangerous tornados, and spitting hail and lightning all around Target Field. The game was delayed due to weather in the fourth inning.

75 minutes later, with clouds still dumping rain all over town, the umpires suspended the game, scheduling a doubleheader for the very next day. The game stopped in the fourth inning with the Astros up 5-1. It continued the next morning around 11:30 and ended with an 11-3 Astros rout of the home team. The Astros completed the series sweep by skunking the Twins 5-0 that night.

Before 2020, the 5-1 game would’ve been wiped entirely from the books. It would’ve taken with it a couple of Astros homeruns, and the Twins would’ve had another change at what amounted to a pitiful start.

In this case, the new rule seems to have favored the Astros, who were able to change pitchers overnight and set up their bullpen for a tough surprise doubleheader.

Instead, games will either be declared official or suspended until they can continue at a later date.

If both teams have seen their fifth set of at-bats, umpires can declare a game over, recording all stats including the W and L.

For the time being (and based on a desire to reduce the schedule during the COVID pandemic) we won’t see any more “ghost” baseball games.

How Do Sportsbooks Handle Delayed and Suspended Games?

What if you’re betting on MLB games? What do you need to understand about delayed and suspended MLB games? How does this affect your MLB baseball betting strategy?

Delayed games aren’t really a problem for sportsbooks. During the delay, which generally doesn’t go beyond 75 minutes, live bets are still open. Books don’t cancel bets because of rain delays.

So far, what I’ve seen from sportsbooks regarding suspended games has been a little surprising. During that Astros game delay, overnight while the teams were sleeping and I was poking around on my Bovada account, I noticed that I could still place bets on the game. In fact, the Astros were still getting plus money (+130) on the run line, even though they held a four-run lead at the time.

I went ahead and dropped $100 on the run line, considering the Astros already had such a big advantage. I was shocked that Bovada let me place the bet. Of course, Houston covered with six runs to spare, and I won a little more than a unit for my trouble.

Browsing through a bunch of the best online sportsbooks, it seems like all bets are push unless a game goes 6.5 innings (or 7 if the home team is behind). This is true for the traditional bets, like run line and money line wagers. Some prop bets require 8.5 innings to be complete.

Does this really worry you?

Check your book’s terms and conditions or talk to customer service. You can find a list of the best sportsbooks for MLB bettors here, by the way.

In 2021, a bunch of bettors got sore at BetMGM over their handling of a suspended game’s payout. It’s a relevant story that you should pay attention to, because this could easily happen to any MLB bettor who uses an online book.

When an MLB game is suspended mid-inning, lots of online books reserve the right to declare that bet complete. Read your fine print and you’ll see what I mean. When a game is suspended later than the conclusion of the fifth inning, books can decide their bets based on the score at the end of the last full inning.

Really early in the 2021 season, the Cincinnati hosted the Arizona Diamondbacks. The Reds had a 4-3 lead at the end of the seventh inning, but they called play due to snow. BetMGM paid out as though that were the final score, even though the game continued the next day.

In fact, Arizona wrapped up a 5-4 win the next day. BetMGM paid out Reds moneyline bettors regardless of the fact that Arizona actually won the game.

BetMGM isn’t the only book that does this. It’s standard practice.

Here’s what DraftKings has to say on the same topic:

“In the event of a suspended baseball game, a bet is declared void on a cancelled or postponed game which has not started, or in the case of a result not having been issued within 12 hours of the scheduled start time.”

You’ll find language like this at every US-facing online sportsbook.

Just be aware that a game suspension can lead to some screwy outcomes for baseball bettors.

How MLB Washouts Can Work in Your Favor

Not all the news for bettors is bad.

The new rain delay/suspension rules can also go your way.

Sportsbooks generally refund totals bets for a suspended game. You can even get a refunded bet if the total is already busted.

This happened in June of 2019, when the Mets and Cardinals were locked up at 4 runs in the bottom of the ninth. Even though the game total was 7.5, because they suspended the game due to rain, books refunded all totals bets. That meant lots of losing tickets became break-even tickets.

Since books also refund run line bets, nobody loses in the case of this 4-4 tie. The same goes for live bets.

Yes, baseball is changing. Average game length is starting to fall – we’re down to 3 hours and 5 minutes in 2022 compared to 3 hours and 10 minutes in 2021. I expect these numbers to continue to drop as small changes in rules lead to swifter games and smoother on-field operations.

The rules sportsbooks use to determine how to handle an MLB rainout don’t always work against bettors. Sure, the fine print at your local book can burn you. But you’re also likely to get a push result in a bad situation.

Be aware of the effect MLB rules for weather have on your bets, but don’t worry too much about them. The weather is one thing bettors, owners, and books have no say in.