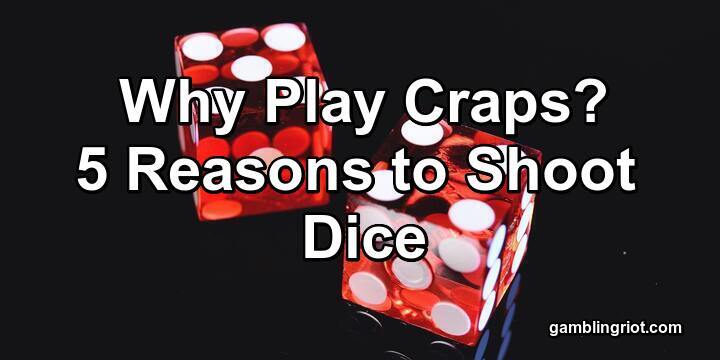 It’s one of the most popular and iconic games in all of gambling, and for good reason—it’s exciting and flashy. Movie and TV directors know that most audiences are aware of the connection between rolling dice and gambling. That’s why you’ll see the craps tables featured in a shot or 2 in almost every gambling-related movie you’ve ever seen.

But just because craps is iconic and well known doesn’t mean it’s the game for everyone. In fact, for many beginners, craps is probably one of the most intimidating games out there.

Anyone, no matter their skill level, can pick up any game in a casino and play with a little practice.

If you’re serious about doing well and making some money when you visit the casino, then craps is the game for you.

1- Some Bets in Craps Have Incredibly Good Odds

If you’ve ever walked into a casino, you’ve probably gone to take a look at the craps table. For no other reason, you probably wanted to see what the excitement is about.

And if you did, you were probably overwhelmed by the game’s complexity. Without having studied the rules for a little while, the average gambler just isn’t going to be able to make sense of what’s happening.

In fact, they’ll often say to themselves, “Why play craps, anyway? There are easier games to play.”

This is to the casino’s advantage. Craps offers some of the best bets in the whole place.

Casinos want newcomers to play craps because of how complicated it is. Also, there are many bad bets that you can make. In fact, you’ll regularly find craps bets that have a house edge upwards of 10%.

To put that in perspective, you’re going to find a house edge of about 0.5% in blackjack and 0% in some forms of video poker.

But a handful of bets in craps that have great odds. The house edge on these is below 2%.

And there are even bets in craps that have no house edge.

I won’t go into detail about what those bets are (let’s save that for another post).

But it’s something to keep in mind.

Craps is the way to go if you don’t want to spend time learning how to count cards so you can kick butt at the blackjack tables.

When I walk into a casino, I’m not there because I have visions of being rich and famous. I’m there to have a good time and spend some money.

Now if I make a little money, I’m happy about that.

If you’re a professional gambler who got into it because it’s so much fun, then craps is the way to go. It’s just so much fun.

Don’t get me wrong. A lot of other really fun games are out there.

But craps is one of the few truly social games that you’ll find in the casinos.

What makes the fun-level of craps so high is that craps combines the elements of a fun gambling game that you usually only find in pieces in other games.

For example, roulette has a high level of suspense, blackjack goes fast, and poker has a lot of social interaction. In craps, you get all of these combined.

But most of the time, you and the other bettors are betting together.

That means everyone wins and loses together. This forms a sense of camaraderie that you’re not going to get anywhere else.

Sure, poker is social, but it’s not social at the same level at all. You’re all competing against each other.

In blackjack, you’re all playing against the dealer, that’s true. But everyone’s hand is treated differently.

With craps, everyone is in the same boat. The game moves quickly. The bets are laid and dice are rolled fast. And the level of suspense can become killer quickly because you’re all betting together (for the most part).

Ultimately, craps is easily the most fun game in the casino—if you’re going to gamble and spend hours at the tables, at least spend them somewhere where you’re having fun.

3- You Can Benefit Off the Skills of Other Players

Now I will readily admit that this is true for poker as well (to a degree), but it’s not true in the same way. If someone else at the poker table is really good and is kicking everyone’s behinds (and you’re benefiting as a result), you’re eventually going to be their target.

When it comes to craps, it’s different because you’re all playing together. If someone is particularly good at betting and rolling the dice, you can spend enough time at the table to figure out just how good they are and realize when to bet with them (and if you should ever bet against them).

Some people are able to treat the dice like their own personal bank account—I don’t know what it is, but there are some people out there who can throw dice so well they come up almost the way you would expect.

If someone like this is at your table, you can benefit from their skills. You just have to see how they’re betting and follow suit.

By the same token, some people have a deep understanding of betting strategy with craps. While you can see someone who understands strategy at the blackjack table, you can’t mimic what they’re doing because you’re both playing with separate hands.

At the craps table, you’re all betting on the same pair of dice. You can absolutely duplicate their bets and benefit from their knowledge.

I think this has a lot to do with the fact that craps is just such a visible component of every casino, but just about every seasoned gambler will tell you that it’s true that the best comps can often be found at the craps table.

To really break it down, I’m willing to bet that the casinos know just how many bad bets there really are in craps and understands that the draw can be particularly enticing for new players (and that they thus stand to make some significant money from a loud, exciting craps table that entices new players to throw some money away), but if you’re a pro and spending a good deal of time at the craps tables (and are making some large-ish bets), then you’re going to get some serious comps pretty quickly.

Now just like in any casino, comps are going to vary by game and by casino and even by pit boss, but if you walk in and start out with some big bets, the pit boss will notice, and you’ll likely walk away with some serious freebies without spending as much as you’d have to at the blackjack tables for example.

5- Why Play Craps? The Strategy Is So Simple

So again, I’m not going to dive into how craps strategy works, but the truth is that probably only roulette is as simple in terms of strategy—you only have to understand how a handful of bets work in craps to do well, and you can basically ignore everything else.

Remember, craps only seems overwhelming and complicated—but the betting strategies aren’t. There are only a small handful of bets worth making. Once you’ve memorized those, you can make those bets over and over and walk away with some cash.

Now let’s compare this to poker, where the strategy is psychological and depends on you learning the tells and reactions of every player at the table, or blackjack, which requires you to memorize a variety of different card combinations and learn the right move for dozens (if not hundreds) of different situations.

All of that sounds a ton more complicated than learning 5 or 6 different bets!

If you’ve never played craps, give it a shot—you’ll be glad you did if you gamble a lot.

Got any other reasons why you think craps is a great game? Let me know in the comments.