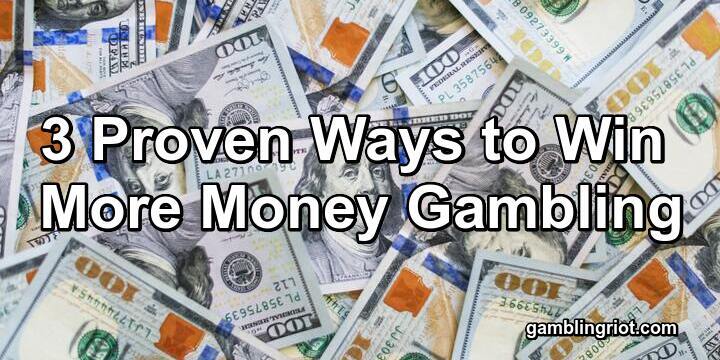 Most of that information is worthless.

You’ll find plenty of gambling systems that are written and promoted by people who are interested in nothing more than lining their own pockets with your money.

Like the people selling picks and shovels during the Gold Rush, they understand that the real money to be made in the gambling industry is to be made selling stuff to the gamblers.

They also understand that there’s little or no money to be made from actually gambling.

Some of these folks are just confused and self-deluded, but most of them are just dishonest.

This post is different. I’ve only listed ways to make money gambling that actually work.

Unlike a lot of the writers and webmasters on the internet, I have a conscience.

1- Learn how to play blackjack and use basic strategy.

Blackjack usually has the lowest house edge in the casino. If you find the right game, you can face a house edge of less than 1%–maybe even as low as 0.26%.

But that house edge is only that low if you play with perfect basic strategy.

If all of this is completely new to you, here are a couple of explanations:

Blackjack is a card game where you compete with the dealer to see who can get closer to a total of 21 without going over. The cards have point values between 1 and 11. (Face cards are worth 10, aces 1 or 11, and all other cards have the same point values as their ranking.)

You start with 2 cards. So does the dealer. One of the dealer’s cards is face-up, the other, face-down. You can take additional cards and stop any time. If your total exceeds 21, you lose immediately.

You can also make more exotic moves like splitting cards, doubling down, and surrendering. You can find a detailed explanation of how to play blackjack elsewhere on this site.

The house edge is a mathematical approximation of how much you’re expected to lose every time you  place a bet on a specific game. It’s expressed as a percentage of your bet. It’s a long-term average that becomes clear over thousands of bets.

In the short run, you won’t see results in line with the house edge. That happens over the long run when you average your losses by the number of bets you’ve placed.

You can read in detail about the math behind probability and the house edge elsewhere on this site, too.

Basic strategy is a matrix of decisions organized according to your total and the dealer’s up-card. You have one decision you can make in every situation with the highest expected value. The low house edge I quoted you assumes you’re making your decisions based on this matrix.

Basic strategy is easy to learn using a table or just using a text explanation. You can’t learn it overnight. But it’s worth the time and effort to learn.

Players who don’t use basic strategy tend to face a house edge of closer to 4% or 5%. You might as well play roulette if you’re not going to make more effort than that.

As a general rule, the lower the house edge is for a game, the better your chances of winning are.

2- Stay away from the slot machines. If you like gambling machines, learn how to play video poker instead.

Slot machines don’t necessarily have the highest house edge in the casino (although some of them might). The problems with slot machines are 2-fold:

I talked about the house edge in the section on blackjack above, but the reverse side of the house edge is the payback percentage. That’s what gambling experts use to measure the odds offered by slot machines and video poker machines.

If a slot machine has a payback percentage of 95%, its house edge is 5%. The casino expects, in the long run, to pay out $95 in winnings for every $100 you bet on the slot machine.

The payback percentage for a slot machine is relatively easy to calculate–assuming you have all the information available.

You take the payoff for each possible winning combination and multiply it by the probability of earning that payout. You add all those together, and you have the overall payback percentage for the machine.

But slot machines only present you with half the information you need. The pay table shows you how much the various combinations pay out. You don’t get access to the game’s probabilities, though.

The problem is that modern slot machines use a computer program called a random number generator to come up with your combinations. The odds of getting a cherry might be 1/10. But they might also be 1/12, 1/16, or 1/32. It  could be any other number, too.

And different symbols might have different probabilities–making it even harder for a player to guess the payback percentage for a specific game.

On top of not knowing how high or low the house edge is for slot machines, the rate of play is huge. The average slot machine player makes 600 bets per hour.

This gets you into the long run faster, which means you’re more likely to see results similar to the mathematical expectation. The goal is to win in the short run by getting lucky.

The more bets per hour you’re making, the less likely you are to get a quick win.

Video poker machines, on the other hand, give you both the payback percentage and the probability of getting a specific combination. They don’t give  you the specific percentages, but the odds involved with a deck of playing cards is a known quantity.

Every deck of cards has 52 cards in it. They also have 13 cards, each of a different ranking, in 4 different suits.

Video poker experts and mathematicians have crunched the numbers so that they know what the payback percentages are for the most common video poker pay tables.

As it turns out, not only do video poker games offer transparent odds information, they also offer better payback percentages than slot machines.

Playing video poker instead of slot machines will increase your chances of walking away a winner.

3- Learn how to play poker and get good at it.

Poker is one of the only games in a casino where you can get a mathematical edge. One of the big reasons for this is the level of skill involved in playing the game. If your skill level is better than that of most of your opponents, you’re in a positive expectation situation.

This might sound scary or hard, but the truth is, plenty of lousy poker players are in action at any given poker table at any given time. I play in Oklahoma a lot, and I can attest to how loose and passive a lot of the limit holdem games are there.

One of the easiest ways to improve your poker game is to look at how aggressive and how tight you play. The 2 are related, but they’re not the same thing.

Aggressive play gives you a better chance of winning. Every time you place a bet or raise, you put pressure on your opponents to fold. This increases your odds of picking up pots without having to go to the showdown. (If all your opponents fold in the face of your raises, you win the pot by default.)

Tight players play few hands. The opposite of a tight player is a loose player. These kinds of players get into a lot of hands, and they don’t have high standards for what kind of cards they play.

The worst possible playing style is to be passive and loose. This means you call bets a lot, regardless of how good your cards are. You’re just donating money to the other players if you play like this.

The best possible playing style is to be tight and aggressive. You only play hands when you actually have something worth playing. When you do play those hands, you’re putting pressure on your opponents to fold by betting and raising a lot.

Even when your opponents stay in a lot of pots, you’ll benefit because you’re combining your higher chance of winning with bigger winnings. (After all, you’re putting money in the pot. If they want to stay in the hand, they have to put their money in the pot, too.)

The trick to becoming a tight aggressive player is to get into the habit of raising or folding. Calling bets and raises just aren’t options for you.

The philosophy to have is that if a hand isn’t worth raising with, it isn’t worth playing. If an opponent raises in front of you, and you’re not comfortable re-raising, you should fold. 95% of the time, that’s the right move to make.

Of course, that’s just a bird’s eye view of one aspect of playing poker. Analyzing pot odds, identifying tells, and picking up how many outs you have are also aspects of playing winning holdem.

Some people shouldn’t gamble, ever. They might have impulse control problems, or they might just not have any money. You can’t win money gambling unless you have a big enough bankroll to make the right decisions at the right times.

Also, it’s impossible to win every time you play–especially when you’re playing negative expectation games like most casino games. You need to learn to live for the short term if you want to win money gambling.

These aren’t the only ways to win, either.