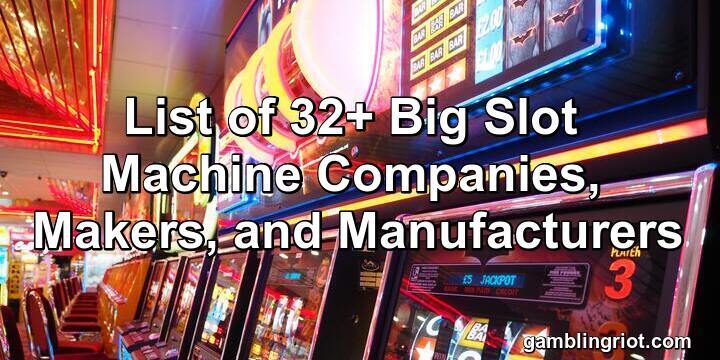 I plan to include reviews of various gambling machines here soon, and I’m starting with a look at some of the slot machine manufacturers and their products. Not long ago, such a list would be short. But with the advent of internet casinos, the list of slot machine companies grows ever longer. And finding slot machines near where you live is easier now than ever in the United States.

Depending on where you live, you might be searching a phrase like “fruit machine suppliers” or “gaming companies.” Such a list should (and does) include old slot machine brands like IGT (International Game Technologies) and internet casino software vendors like Microgaming and Playtech.

And as I write more posts about related subjects, I’ll update this page with links to slot machine manufacturer-specific lists of games and reviews of their overall offerings.

A lot of sites in this space try to offer as complete a resource as possible, but I’m just one blogger. I don’t have an army of freelance writers working for me, and even if I did, there are so many slot machine games from so many different providers that it would be impossible to keep up with them all.

But if I’ve left out your favorite slot machine manufacturers, let me know in the comments, and I’ll add it to the list.

Ainsworth Game Technology is one of the oldest companies on my list of slot machine manufacturers. In business for 20+ years. Ainsworth is an Australian company. And if you know anything about gambling in Australia, you know how popular slots are there. They call them “pokies,” though, which is an abbreviation for “poker machines.”

Some of Ainsworth’s most recent game additions include:

Amatic Industries has been in business for over a quarter of a century. Besides slot machines, they make video lottery terminals and video roulette games. They have a huge selection of slot machine brands in their stable, too, including some of the following:

Amaya Gaming part of The Stars Group, the company which owns PokerStars. As a result, it’s now defunct. I include it here under its original name because I think some online users still look for games from Amaya Gaming. They offer lots of cute games, including:

Aristocrat Gaming Technology is another Australian “poker machine” vendor. They’ve recently gotten their hands on some major intellectual property, too, and they offer games like:

You can find more information about Aristocrat at Slotsguy.com.

Ash Gaming used to be a big deal, but now they’re a part of Playtech. As part of that group, they have extensive licensed properties to create games about. Their most famous, though, is probably Who Wants to Be a Millionaire.

Bally Technologies is now a subsidiary of SG Gaming (Scientific Games). The company has been around forever. Not only do they make slot machines, but they used to be one of the biggest pinball machine companies in the world, too. Some of their most well-known brands include:

Barcrest Gaming–like Bally Technologies– is also now a subsidiary of SG Gaming (Scientific Games). If you’re a real slot machine aficionado, you might recognize the names of some of their games:

Betsoft Gaming specializes in online gambling games, especially mobile friendly slots and 3D games. Here are some of their titles:

Blueprint Gaming is based in the United Kingdom. Most of their fruit machines can be found on casino floors there or in Germany and Italy. Here’s a sample of their titles:

Cadillac Jack was a subsidiary of Amaya Gaming, which is now wholly owned by The Stars Group.

EGT Interactive specializes in video slots. You can find their games at various sports book sites that also offer casino games. They offer over 150 different games, including titles like:

Endemol Shine Gaming specializes in both online and brick and mortar gambling games. Some of their best-known properties belong to the licensed television game show genre. Some examples include:

Fremantle Media is one of the more unusual listings on this page, because they don’t exactly design or manufacture slot machine games. They own several large television brands, which they aggressively promote through multiple channels–including slot machines. If you’re playing one of these slots, Fremantle Media had a lot to do with it:

The Gamesys Group does slots and bingo games. Some of the better known brands in their stable include:

High 5 Games creates both internet-based and land-based slot machine games, some of which are popular. They use HTML 5 for their online slot machines. Their most famous games include:

IGT is the largest slot machine company in the world. They’re everywhere. The most popular gambling machines in the casino are the product of International Game Technology. Just a few of their big names include:

Konami Gaming is the maker of the following slot machines:

Mazooma Interactive Games is a UK game company that specializes in online games. They’re now a subsidiary of Novomatic.

Microgaming was the first large online casino software provider. They’re best-known for the wide variety of their online progressive jackpots. Some of their most famous brands include:

I’ve written about Microgaming before, here.

NetEnt is another publicly-traded company specializing in online games. They’re responsible for, among other things, the Jumanji slot machine game.

NewGin Co. Ltd. is also a Japanese manufacturer of pachinko and pachislo machines.

NextGen Gaming serves both online and land-based casinos. They offer some really cool titles, including:

The name “Novomatic” always reminds me of the Steve Goodman song, Vegematic.

But that song has nothing to do with the company, though. Novomatic Gaming is probably the biggest European slot machine maker there is, in fact.

Some of their games you’ve probably heard of include:

Ortiz Gaming specializes in Class II and Class III slot machines, especially when it comes to bingo technology. And their games are OVERTLY bingo-based, too:

Playtech is another online game designer and creator, and, like Microgaming, they’re publicly traded. They also don’t allow their licensees to accept real money players from the United States. Some of their better known games include:

Realtime Gaming (RTG) is probably the biggest online casino game vendor that still serves U.S. audiences — at least the audiences that don’t live in states with legal, regulated online casinos. (There are 47 states like that.) As a result, you’ve probably never heard of most of their games unless you’re a devoted internet gambler.

My favorite of their games is It’s Good to Be Bad, but I’m old school.

Scientific Games is headquartered in Las Vegas. They own Bally now, and they own Shuffle Master. And they also own WMS Gaming. Their most well-known game is probably Monopoly slot machines.

Universal Entertainment Corporation is another pachinko and pachislo manufacturer.

VGT is one of the biggest names in the Oklahoma gambling market, and they specialize in bingo-based slot machine games.

WMS Gaming is now a subsidiary of Scientific Games. So see that entry above.

Apollo Games has a full profile on our site. Click the link for full details.

The brand names in the slot machine manufacturers category are many, but, of course, IGT (International Game Technology) towers above the rest like Walmart towers over other retail establishments. The list above gets longer when you account for the companies making online slot machine games, too.

If you have any comments about the games available from these slot machine companies, I’d enjoy hearing them. I’m human and make mistakes, so if you leave a comment pointing one out, I’ll update this post with corrections (and probably even give you credit.)